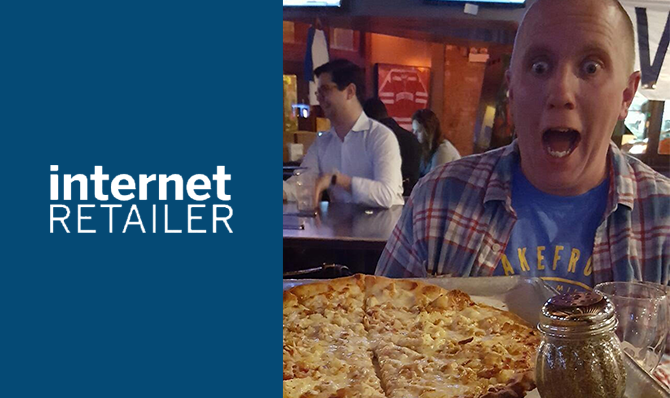 One on One with Internet Retailer’s Matt Lindner

With so many companies competing for ink, it's critical to build steady, ongoing relationships with reporters. Continuing our series of conversations with journalists, recently I spoke with Matt Lindner, associate editor for Internet Retailer, freelance writer and Chicago native. As a PR professional with a strong focus on all things retail and martech, Matt has an opinion I respect, an open ear, and eats, breathes and sleeps ecommerce - making him the perfect subject for today's Q&A.

Q: Typical first question: how many pitches do you get per day?

A: Between Internet Retailer and my freelance work, I generally average around 50 or so per day.

Q: What percentage do you actually read and what moves you to make that choice?

A: I try to scan through all of them, to be completely honest. Since I use Outlook at Internet Retailer, there’s not a whole lot of effort involved in actually taking a cursory glance at a pitch. That being said, if I’m being cold pitched by someone I’ve never worked with in the past, I generally don’t devote more than 10 to 15 seconds to reading each pitch before deciding whether or not I’m interested.

Q: Do subject lines play a role in which emails you open?

A: Absolutely. I won’t open a pitch with a subject line BREAKING or URGENT, largely because an unsolicited pitch is never urgent to anyone but the publicist and their client and more often than not, when something is labeled BREAKING, it’s something that has been on the calendar for months. Subject lines that are too cutesy automatically get deleted. Subject lines that get to the point I’ll generally open and spend more time on than ones that are laden with meaningless buzzwords.

Q: Retail is HOT. How can we break through the noise and grab your attention?

A: Get to the point. So many times when I’m getting pitched, a publicist will not spell out what they’re trying to pitch in plain English. When I get them on the phone and ask them “So what does this actually mean?”, I’m usually greeted with regurgitated talking points rather than what I’m looking for, which is an explanation of why I would care about their story if I was not getting paid to care about that story. Publicists repping vendors who don’t offer up retail clients who will sing their praises also automatically go in the deleted file as well. Without a retailer who will say “Yeah, I used this tool and it increased my conversion by X percent,” I. Do. Not. Care.

Q: Do relationships play a role in what you pay attention to?

A: Absolutely. The relationship building aspect of public relations is completely lost in this day and age. There are a handful of publicists who I’ve worked with in the past and developed relationships with to the point where if they pitch me just about anything, I’ll at least try and respond one way or the other rather than just deleting their email and leaving them hanging. I do not have time to respond to every PR pitch I receive on a given day, but the publicists I’ve worked with in the past and who have delivered results for me, I’m more than happy to lend an ear to.

A: Incessant follow ups and publicists who promise a placement and then expect me to deliver for them. This is something I’ve written about many times in the past. If you wouldn’t want a sales guy treating you a certain way, don’t treat me like that as a journalist. A couple of examples of this – last week, a young lady sent me an email pitched and cold called me five minutes later, telling me “Hey, I just sent you this email and wanted to call your attention to it.” First off, I have in every single media database that I’m in that I do not, under any circumstances, want to be pitched via a cold call, so she was already behind the eight ball there. Second, I am attached to my email all day every day. Things do not “get lost in the shuffle,” they “get deleted” because I am “not interested.” Another example – I had a gentleman send me an email pitch and follow up with a phone call the same day. This was on a Tuesday and he proceeded to follow up either via phone or email each of the next three days. This is hugely unprofessional and something that will, more often than not, get you rerouted to my spam folder fairly quickly.

A: My success at Internet Retailer is measured by the quality of stories I write. If I’m writing stories that offer our readers insight into the e-commerce space, I’m doing a good job at my job. If I’m not, then I need to reevaluate what I’m doing with my career.

Q: Over the past year, what have been your favorite stories/topics to cover?

A: I am fascinated by what retail chains are doing to get online shoppers into their stores. This is something that has evolved fairly quickly over the course of the past couple of years as retail chains look for ways to stanch the bleeding of store sales by luring online shoppers into those stores. Between Wal-Mart offering discounts on online orders picked up in stores to Home Depot and Lowe’s giving online shoppers visibility into local store inventory, multichannel retailing has a wealth of interesting storylines. It’s going to be interesting to see over the course of the next 12-18 months who figures it out and who winds up getting left behind.

A: Doing more with less. As a journalist, you’re constantly busy in this day and age and you’re being asked to produce more content without the benefit of additional resources. There’s also the constant struggle to figure out how to drive website traffic via social media. Social media is a moving target, and anyone who says they’ve got it figured out is only kidding themselves. As journalists, we do have to spend a lot of time on social media in order to engage and inform our audience. The key is figuring out where our audience is and how best to engage them while at the same time not devoting so much time to our social media channels that it takes away from the quality of reporting that we produce.

Q: You’re a big Twitter fan - any other platforms you use as much? Should we pitch you via Twitter?

A: Twitter is my biggest source of news and information. I’ll use LinkedIn to connect with sources and Facebook occasionally to check for news, but Twitter is my main squeeze.

Publicists should absolutely not pitch me via Twitter. Use Twitter to build relationships with journalists, and feel free to engage with me via either of my Twitter handles, but do not pitch me via Twitter. Every now and again, I’ll see publicists try something where they send the same tweet to a dozen or more journalists trying to get them to cover a particular story. Trust me, we see that, and it does not look good. Use Twitter and LinkedIn to build relationships with specific journalists so that when you do have a great story idea, that journalist is already warmed up, knows who you are, and is more willing to read your pitch rather than delete it.