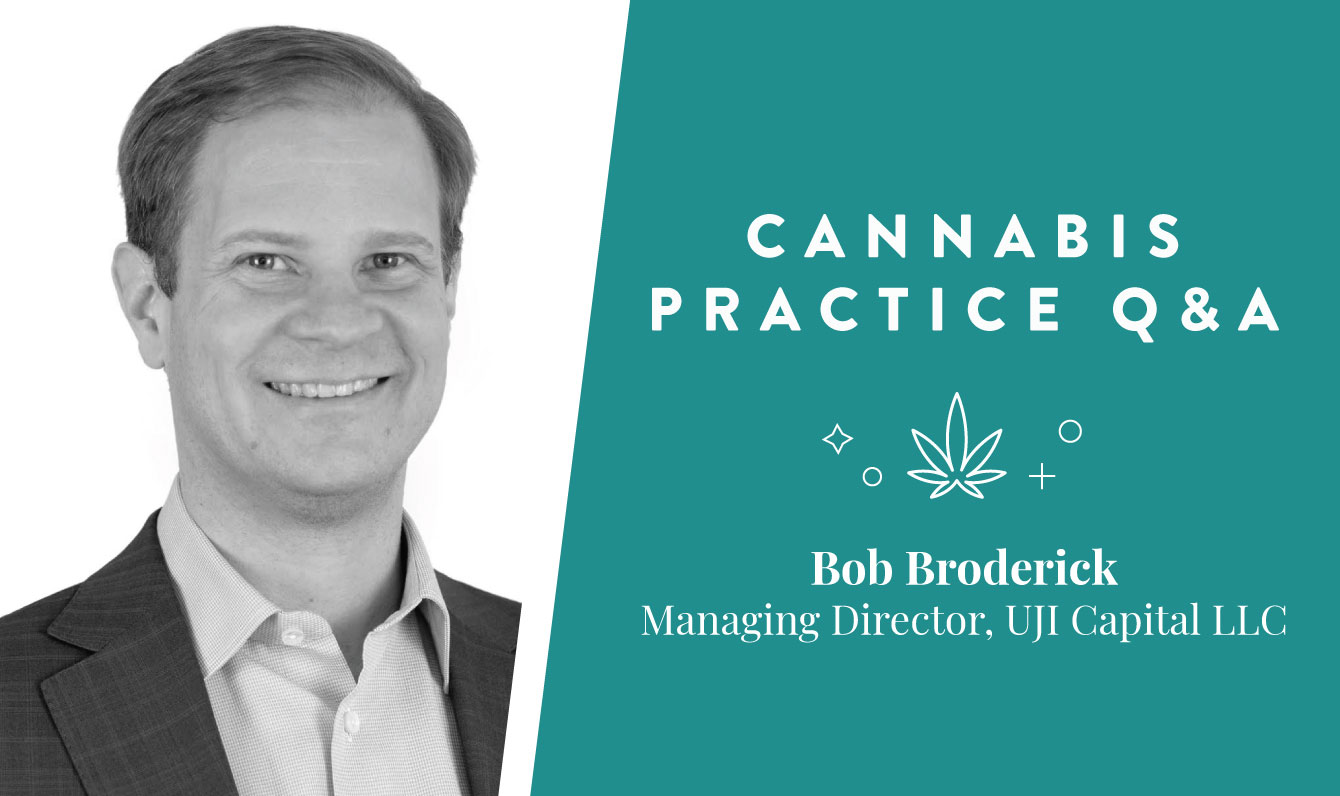 What does a moral, legal cannabis industry look like?

Harvard and MIT cannabis research donor Bob Broderick speaks to our practice lead about the future of the industry.

Since the dawn of the legal cannabis age, there has been plenty written about the industry’s profit potential. “Tax and regulate” has largely been the rallying cry of more business-minded legalization advocates and there’s no question that the possible tax revenue from a brand-new multi-billion dollar industry has helped soften the public mindset in favor of ending cannabis prohibition.

But a legal cannabis industry should be much more than a profit center. Or at least that’s what cannabis investor Bob Broderick thinks. As manager of Uji Capital, Broderick made early bets on the Canadian cannabis market, including Tweed Marijuana Inc. and Aphria Inc., which have since grown into two of North America’s most successful cannabis companies. Subsequently, Broderick made a private investment in and served as a board member for Tokyo Smoke, an ​​award-winning ​​cannabis ​​lifestyle ​​brand, which was ultimately acquired by Canopy Growth Corporation in 2018.

Broderick recently donated $9 million to Harvard and MIT for the study of cannabis - the largest private gift to date in support of such research. The endeavor that will further legitimize cannabis,  communicating that it is worthy of serious study. But Broderick’s vision for cannabis goes beyond academics. This summer, he spoke at the Canaccord Genuity Cannabis 100 CEO Summit about the need to set a moral agenda for the cannabis industry.

Below, I spoke to Broderick about how the industry is evolving and where it needs to go.

Baker: I was hoping you could start by telling me about how you got involved in the cannabis industry in the first place.

Broderick: I had been running a family office, which I established in 2013. My attention was initially brought to the Canadian cannabis market because those were the first companies that were able to list on a federal stock exchange. I started investing initially as a small part of my portfolio and, as I learned more about it, I became more dedicated to the cannabis space exclusively.

Baker: How have you seen the industry change since you first started investing?

Broderick: The biggest shift in the industry is that it’s moved from attracting high-risk-taking entrepreneurs and scrappers and hustlers to more professional players, like those you’d see from other industries. The operations, especially in the United States, have become more professionalized. It feels a lot more like other industries now than used to.

Baker: On that note, you recently made a sizeable donation to Harvard and MIT with the express goal of studying cannabis and really trying to enhance our public understanding of cannabis and how it works, which will help to continue to legitimize both the plant and the industry. What prompted your decision to make that donation?

Broderick: One of the things that is commonly brought up among industry participants is the lack of available fundamental, unbiased research on the effects of cannabis on the body. In that void, the vacuum of information allows companies to make claims that are probably inappropriate and it makes the job of the legislators that much more difficult. The gift seemed like a good way to kickstart an important area of work in this industry. As the industry becomes more professionalized on the whole, rigorous academic research is another area of activity that needs to occur.

Baker: And how do you think that level of research will change public perception of cannabis itself?

Broderick: Harvard and MIT both have some of our finest scientists and engineers. I'm hoping that that they can bring to bear the level of professionality to produce research that could be relied on by cannabis consumers to help them understand where the benefits that they're perceiving are actually coming from.

Baker: You recently gave a talk on a moral cannabis industry, painting a picture for what your vision for a moral industry would look like. Could you tell me more about that vision and what needs to happen for it to come to pass?

Broderick: The talk that you're referring to was to a gathering of the top hundred CEOs in cannabis. The point that I was trying to get across to them was that this is such a new industry and we have the unique opportunity to influence and shape what it will grow into. It's a lot easier to start off on the right foot than to try to go back and change that later. When you build out your policies, make your hires and launch your strategies, you should keep in mind the impact that it's having on the community.

That’s not just the investment community, but the community of your patients and consumers. Try to make decisions that will benefit all of us. A lot of times corporate leaders are so solidly focused on creating shareholder value that they lose sight of making decisions that can be philanthropic in basis or for the overall good of the community because they don't represent an obvious economic benefit. But that doesn't mean they shouldn't be pursued. They should be pursued so that we can have the kind of industry we’re all proud of - one that does a number of positive things for disenfranchised groups and the poor and promotes other elements of social justice.

There are people who feel that corporations should never do those kinds of things, that they should exist strictly for creating profit, that the owners of that capital are responsible for doing acts of social good. But I don't think that that's true. I don't think a corporation can exist solely in that vacuous space of profit seeking.

Baker: Do you think that because the industry has a close connection to the war on drugs and the legacy of the war on drugs, it has a special responsibility to be mindful of social justice?

Broderick: I think you're right. It's much more visible in this space than it is perhaps in other spaces. We have to behave delicately and not irresponsibly.

Baker: Are you encouraged by how you feel like the industry is taking this on? Is it heading in the right direction?

Broderick: I feel like it's a mixed bag. There are a number of issues in the industry that could be addressed. Some of the companies are actively pursuing policies that will have a positive impact and some of them are not. My feeling is that the ones who are dedicated to making positive change will attract shareholders that reflect those values. My hope is to see that the companies who are good corporate actors will do better over time and take oxygen from those that aren't.

Baker: It also feels like there's a strong consumer interest in supporting brands and companies that are cognizant of the history and who are doing their best to right those wrongs.

Broderick: Consumers of cannabis for a long time have felt shameful and guilty about their usage and now that they've been able to come out into the light, they want to feel good about the new supply chain that they're using. They don't want to think about it as a faceless corporation that's just milking them for profit. That is what we experience as consumers on a day-to-day basis, so why give them yet another thing to feel bad about with cannabis? They want to feel positive about the effect that it's having and the choices that they get to make now. Why get in the way of that?

Baker: Is there anything else about the industry you wish people knew?

Broderick: One thing that we should keep in mind is that for all the talk of recreational and adult use, we can't forget how important sick patients have been to this change in our cultural acceptance of cannabis usage. There are people who really depend on cannabis to help them deal with chronic, serious medical conditions. It's really for those people that this whole thing exists in the first place.

To learn more about InkHouse’s cannabis practice, check out our blog or get in touch with the team directly at workwithus@inkhouse.com.

For Anne, public relations is all about the storytelling. She considers her clients partners on a shared mission to craft the strongest narratives and get those narratives in front of the right people. Anne was the first InkHouse employee in San Francisco and knows all too well the late nights and scrappiness required to get a start-up off the ground. Anne approaches public relations with a strong bias towards execution, doing whatever it takes to get the job done and provide strategic insight. Her clients include some of the most exciting and innovative companies in the U.S. and is leading the effort to grow the agency’s emerging cannabis practice.