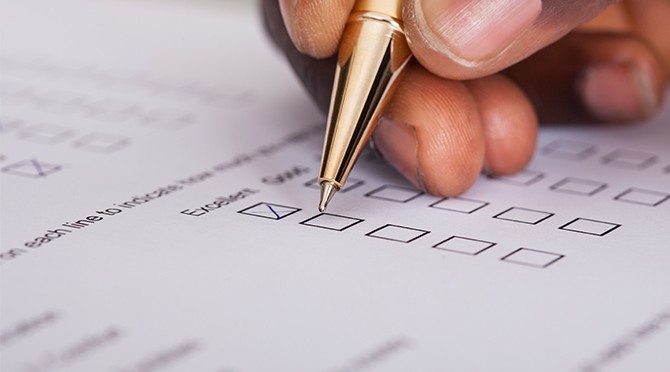 6 Tips for your Next PR Survey

Have PR surveys jumped the shark? A recent webinar and Twitter chat with journalists Lauren Young (Thomson Reuters) and Chitra Nawbatt (CTV’s Business News Network) mentioned “survey overload” and got us thinking. Have we PR professionals exhausted the survey as a tool to land media coverage? Are journalists “surveyed out”? Is the PR survey dead?

Not by a long shot. Good data, presented well, still makes for a heck of a news story. But surveys have become so common that they have to be more colorful, credible and interesting to stand out and get covered. Here are six suggestions for surveys that’ll get noticed.

1. Think in headlines. As you write each survey question, don’t think of the topic you want to ask about. Instead, ask every question based on the headline it will generate. That’s more likely to give you newsy, attention-grabbing findings.

2. Ask interesting questions. This sounds obvious but it’s not. You can’t only ask factual, straightforward questions and expect attention-grabbing results to miraculously appear. If yo do, once you’ve put the survey out and the dry responses roll in, it’s too late to go back. For one client survey, we asked people to compare taking their medications to activities they hated like getting a shot and doing their taxes. Nearly half of people said they’d rather take out the trash than take their meds. There’s your headline.

3. Go easy on the product plugs. If the survey results all point back to your client’s product, reporters will see it as a marketing piece and not news. As you write the survey, think of it as a way to highlight what people think about an issue, not a tool to point people to your product.

4. Don’t skimp on the sample size. For nationwide consumer surveys (like one InkHouse recently did on how people get their news), a sample size of 1,000 is usually large enough to pass the “credible survey” test. The bar is lower for niche groups like chief information security officers, data scientists or lion tamers, where sample sizes can be as low as 100 because the audience is so specialized and difficult to reach. (Side note: How cool would a survey of lion tamers be?)

5. Throw out the boring results. Don’t feel compelled to report survey findings just because you have them. Unlike a scientific study where you’re required to report all findings, with a PR survey you should pick the five or seven most attention-grabbing answers and run with them. In one client survey, recruiters said it was easier for them to find a job for a candidate with a criminal record than one who’s been unemployed for two years. That’s the type of result to identify, pull out and highlight. Punt the rest.

6. Package it up. Don’t just write a new release about your survey results and sit back. Get as much mileage out of them as you can. Blog posts. An infographic. E-book. Video. Social media posts. News release. Pro-active pitches. Encourage your client to promote the survey to their clients and prospects, too. There may be results in the data that weren’t great for PR but are perfect for lead generation.

Those are a few things that work for us when using surveys for PR. What works for you?