Andreessen Horowitz’s Sonal Chokshi on How to Contribute to Future, Her Influences and Advice for Aspiring Journalists (Part 2 of 2)

On June 15, Andreessen Horowitz (a16z) launched Future, a direct media property aiming to connect innovation-curious readers with nuanced, insightful content directly from leading experts. Sonal Chokshi, a16z’s editor-in-chief and long-time showrunner of the firm’s podcast network, was kind enough to spend time chatting with us about what influences helped shape Future, how subject matter experts can contribute and her advice for aspiring journalists. If you missed Part 1 of the interview, you can check it out here.

*The following is an interview that was transcribed from one conversation, and split into two parts and edited for length and readability.

Q: When I saw the news about the launch of Future, I immediately thought of Players' Tribune given its goal to give famous athletes a way to speak directly to fans in their own voices. Are there magazines, newsletters or sites that you feel influenced you as an editor or with where you want to take Future?

Oh my, absolutely. I'm entirely sure if you ask various members of our own team and people internally, they would all have different answers. So these are my personal things.

First of all, I'm definitely a huge Substack newsletter reader. And this is not just because we're investors in Substack, but frankly, I was very pro Substack before we even invested in them. Clubhouse too, listening to the way people talk about things there. I would say that to me, there is not an equivalent of what we're doing, which is why I don't believe it's an "or", it's an "and" in the ecosystem. I think we're trying to cover things that aren't being covered or cover them in a different way than they're already being covered.

Secondly, the thing that I love though, was a feeling that Wired evoked for people back in the day when they were really tech curious. People got a sense of excitement when they got their Wired Magazine in their inbox. And so many people have told me, not when I worked at Wired but more recently, "God, I miss that feeling I used to get." And part of it is because technology became everything, it was no longer a fringe thing on the side. And so that to me would be the analog—not an actual media outlet, but that feeling. Evoking that feeling that there is a place for people who are builders. And not necessarily cheerleaders for tech, but optimistic about the future and what it can do, especially if we have really smart, thoughtful pieces that can get us there. That is what I want us to be. And so between the ecosystem of Substack and the Wired of the old, and plenty of just really smart, direct pieces.

Q: You mentioned the type of voices you're looking to include in Future, what's the best way for them to contribute?

So first of all, I would tell people to go to Future.com and go to the bottom toward "pitch us", which has very explicit guidelines. These are guidelines that came with me from Wired and then I expanded for the podcast, and then I expanded even further for Future. So basically we're looking for pieces that argue for a particular worldview, like a tech trend or a mindset.

And it should be something that helps define what the future looks like. You can explain what, how and why it matters, help tease apart what's hype, what's real. Where are we now? What's coming next? Where are we going? That's the tech trends category.

We're also looking for company building type pieces, so how to build. And this includes frameworks, practical advice and how to. And it could cover talent operations, process technologies, platform shifts, anything. So the two pillars are tech trends and company building.

I would say the other thing is that in general, I find that people who start with specific points of view are the strongest versus those that try to do very general grand unified theories of everything, because those are really hard to pull off, frankly, and very few people can. So when in doubt go specific versus general. We want to have the pitches start with why it matters.

I also ask that people try to share with us, what is their unique take? You don't have to be the first person to argue something, but what's fresh or differentiated? What is that person's unique edge? And lean into what that is.

Q: My final question is a personal one—my daughter is the new editor-in-chief for her school newspaper. Any sage advice for her or other aspiring journalists?

I love that you're asking me this actually, and I personally think people should ask this because I get a lot of people asking, "Should I go to journalism school? Should I pay for this? Should I pay for that?" And the first thing I should tell you is that I got into Columbia Journalism School and I opted not to go because I was in a PhD program there at the time. And the price tag for an MA in journalism was very expensive compared to my PhD, because the PhD was paid for by NSF grants.

And I'm so glad because even though it was heartbreaking for me to decide this might not be in my budget, a dream come true, I ended up going to Xerox PARC where I learned by doing. And so the number one thing she should do is literally look for how she can get experience and build a moat around her skillset, and an edge that other people don't have. So that when she goes out in the job market, she actually can continue doing that as a filter in order to really punch above her weight and get a seat at the table when you go for jobs.

Secondly, and this probably connects us to where we started, is that media today is everything. And quite frankly, it has always been, whether it was blogging, tweets, YouTube videos, podcasts. Podcasts have been around for decades, not just these past five years.

Every company is a media company, and every person is a media company now. There's one- person brands that are essentially media companies on Substack. I believe that's a tremendous unprecedented opportunity especially if she understands how people are monetizing not just through advertising, but through rev shares, collectives, direct subscription, creating Patreons and Substacks, and [even] crypto. I think if she really explores the world of how to make sure that creativity can be funded, she will also have an edge that a lot of people don't because they tend to treat that as an afterthought. 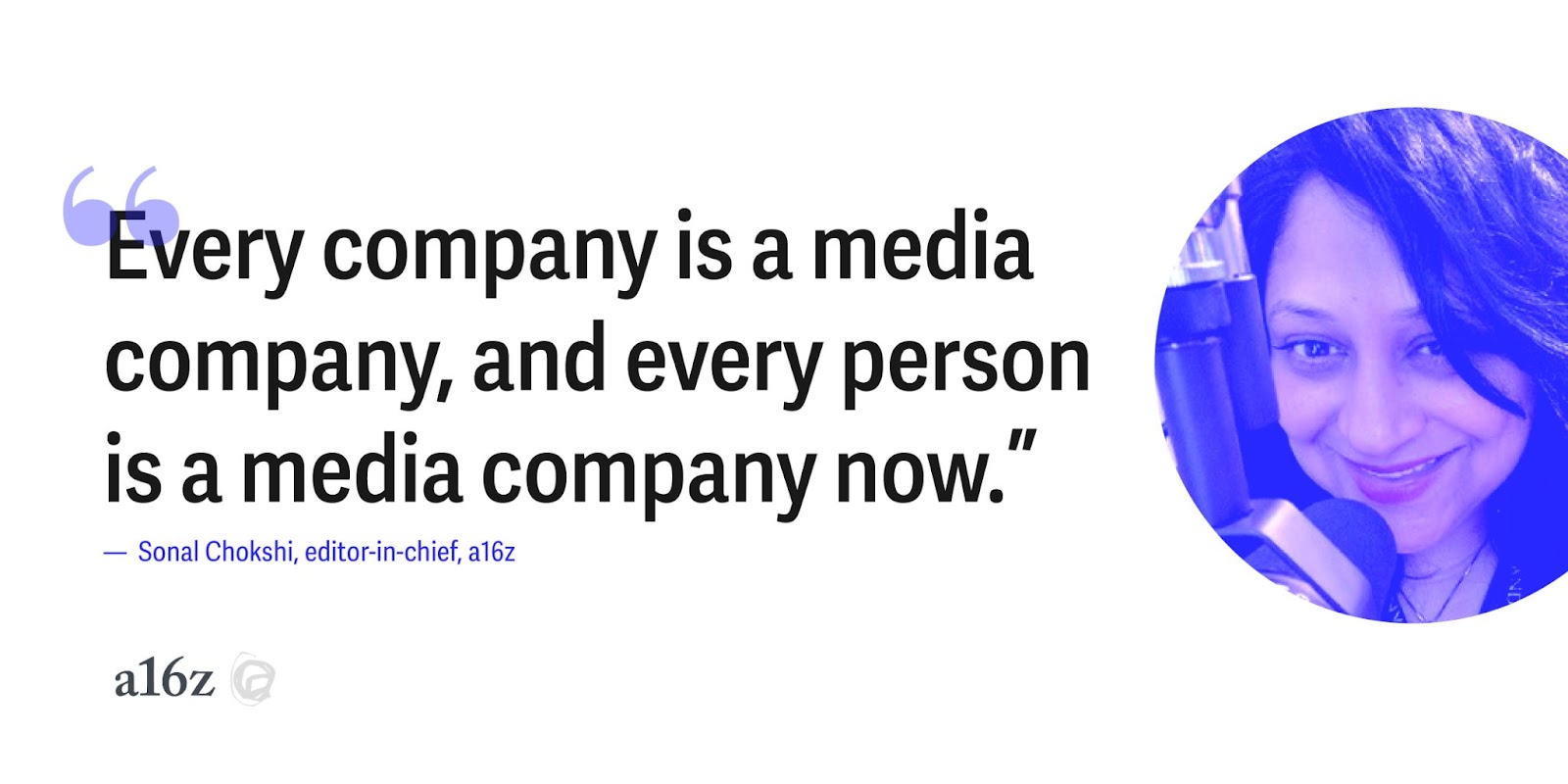 So those would be my two big pieces of advice. One, find your moat. Two, find your monetization and understand the business parts of the narrative as well.

You can learn more about Future by following a16z on Twitter and visiting Future.com.