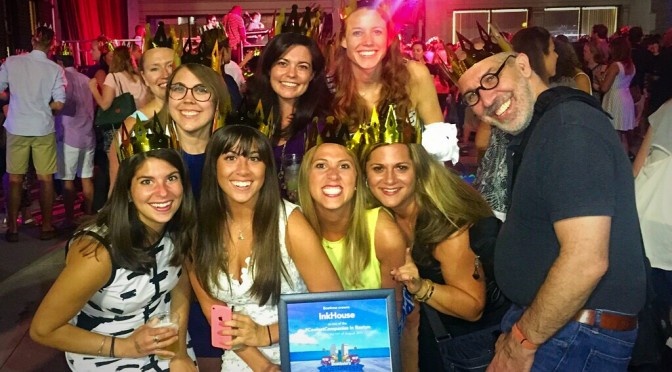 On Thursday night, the InkHouse team took a trip to the Seaport World Trade Center to join 3,000 fellow Bostonians for one of the most anticipated parties of the year: BostonFest.

We sipped complimentary cocktails. We noshed on gyros and burritos from the city’s most sought after food trucks. We rocked out to oldies from local bands including Young Love and The Thrills and Louie Bello. We tested out apps from some of Boston’s up and coming companies such as ReferralMob and MeYou Health. We made new friends and caught up with some familiar faces as well. Did I mention we won multiple selfie sticks?

But most importantly, we were crowned one of the top ten coolest companies in Boston (and we are among good company!) This is not just because we FOF on Thursdays and work from home on Fridays. Or the fact that we have scooters, puppies, and endless amounts of snacks in the office. It’s because the InkHouse team is in it together. We're not about politics. We're about doing great work. We buoy each other through our struggles and enthusiastically celebrate our wins (inside and outside the office).