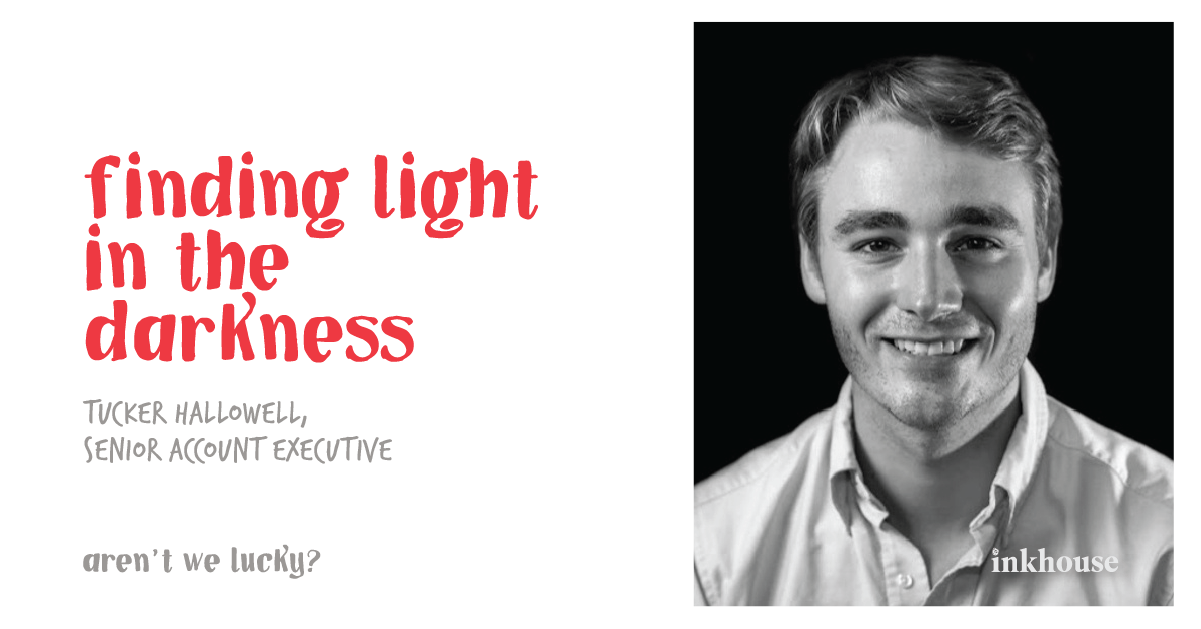 Finding Light in the Darkness: An Employee Essay From “Aren’t We Lucky?”

The bright September sun blistered the air. Heat waves bubbled across the freshly cut grass like oil floating in a glass of water. The drone of the home-field crowd blurred into a calming vibration, reverberating between the lines of the one-hundred-yard soccer pitch. I saw the ball launched into the gap between me and the forward racing down the sideline. It was a footrace. I put my head forward and accelerated into a dead sprint. I knew this guy wouldn’t beat me here. This was my bread and butter. The forward took an ungraceful touch that sent the ball ten yards ahead of him. Sensing the necessary angle, I dropped my hips into the last perfect slide tackle of my career. Then, darkness.

I remember coming to in the locker room, my body hunched over my dirt-stained knees. The lights were so bright that they moved and crackled like the examiner light the dentist shines overhead before operating. My mind was fairly blank and my focus was blurred, but I knew I was pissed off...er, maybe sad, maybe both. Something fumed inside me like a furnace, but I couldn’t put my finger on it. I felt like a tight elastic band was wrapped around my forehead. My skull pulsated against the flesh of the left side of my face as if it were trying to exit my body through the skin. I grabbed my phone from my locker to try to put my mind at ease, but my phone screen also crackled with discomfort. Closing one eye, I started texting my girlfriend. She was abroad in Paris. 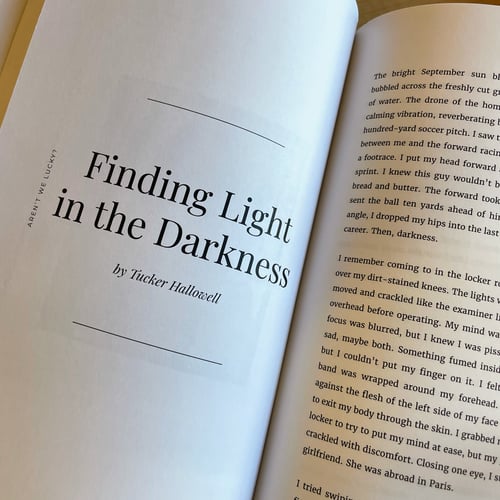 I tried swiping right to unlock the device, but my trembling fingers wouldn’t allow it. I threw my phone at the row of lockers across from me, cursing at the walls as if they had just insulted my existence. My chest started feeling warm, like a machine working in overdrive. I emptied the contents of my locker around the room, throwing chairs and breaking locker doors like they were papier-maché. I hunched over by my locker again, blood now dripping down my fingers.

I had suffered my fifth concussion in the past four years. On a sunny September day, another man’s kneecap sent my brain into a new persona. “Sit in a quiet room and turn the lights off. Make sure you get a ton of rest,” the doctors told me. So rest I did. I spent the next month and a half wallowing in self-disdain. Without soccer, I had lost the mojo and spunk that I had held true of my identity until that point. For the first time in my life, what defined me was neither present nor understandable for the future. Losing that defining piece of me sent me spinning like a tornado.

During that month and a half, I changed in a way that will never be reversed and that I can describe only in retrospect. According to Gregory W. J. Hawryluk, MD, PhD, neurosurgeon and concussion specialist at the University of Utah Health, “We’re starting to learn that perhaps these seemingly minor blows to the head, when they’re accumulative, can lead to depression and behavior change. In fact, we think that some suicides may be linked to the brain damage that results from multiple concussions.”

I became emotionally disconnected, not just from others but also from myself, desperately searching for any sense of validation from those around me. Discovering what stimulated me suddenly became daunting and unclear. Tucker the soccer player was a leader. He was scrappy, tough, and calculated. Concussed Tucker was a shadow. He was slow, confused, and sensitive. Where once Tucker was confident and individualistic, he suddenly became self-conscious and codependent. Sleep was especially difficult. I was always the type to fall asleep late but also sleep through the night. When I was a kid, I used to stay up late playing video games and carry that journey into my dreams. Vivid dreams. Now, I found myself waking up every half hour or so. Some nights, after awakening in darkness, I would stare at the ceiling for an hour or two, maybe three. It became hard to tell. I haven’t clearly remembered a dream since. Days would go by. Nights started fading into mornings. I became a full-fledged insomniac. I spent my days immobilized and braced while things I didn’t fully understand happened around me. It was like the Tucker I knew was slowly being torn from my brain, leaving a mark so transparent that only I could feel the scar.

It’s hard for me to remember exactly what happened during that time span. By the end of it, all of my relationships had been tarnished, to an extent. My entire life before that game felt dim and far off. I might as well have been born in that locker room, with bloody fists and confusion in my mind. My girlfriend (at the time) stayed with me through graduation but never looked at or interacted with me the same way again. When she came back from Paris, I no longer knew what made her tick. My friends stayed with me but held their reservations and constantly questioned my injury. Trying to interact with them was tough; my mind wandered, and I couldn’t seem to insert myself into any conversation. The hardest part about having a concussion is that there’s no blood to show for it.

That summer brought three of the hardest months of my life. I had to let go of soccer and my prior understanding of who I was. I began the summer as a self-loathing slug who put on the facade that everything was okay. I took to drinking early that summer. Two, maybe three weeks of nothing but TV, video games, weed, and booze. One day after my morning toke, my brother reminded me about a game we used to play in our small basement corridor, called “sockey”—hockey played with a ball of socks and tape. He punched me in the arm. “Remember how you used to cry every time I beat you?”

As I looked into his eyes, I saw that they were filled with a similar identity struggle that I could not ignore. He reminded me that I was in fact a passionate, creative person. I stopped smoking in the morning and drinking every night. I got a job as a counselor at a local sports camp, and suddenly my interactions were reignited. I felt more grounded but also completely undiscovered. I started keeping a journal that summer and found out that I didn’t know myself very well yet, and that was okay. 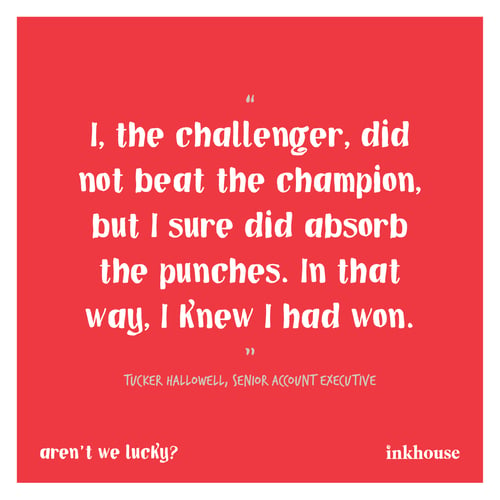 I had once felt as if Tucker the scrappy, tough soccer player had been squeezed out of me. Over time I realized he had just morphed into a new state, like fresh oranges being squeezed into juice. Writing didn’t become my identity, but it became a new avenue for me to cope and express my heart and passion. Writing became something I found hope in. For the first time in my life, I began a school year with an open mind. I became a writing tutor my senior year and realized that my creative passion was best served in collaboration with others. I was different, but I was able to interact. My relationships started recovering. My friends took notice of the difference in me and often poked fun at it, but I let it slide. My girlfriend never came around, but that was okay.

“Tucker, I think it’s time we go our separate ways.” I shifted in my chair, averting my eyes to the floor to avoid contact. “I get it,” I muttered, still wearing my graduation honor cords. I wore two, one for being a writing-center tutor and one for being on the soccer team. She knew I had struggled through the past couple of years. “I’m really proud of where you ended up, you know,” she said, her big blue-green eyes watering.

There had been a time when she looked at me like I was the bee’s knees. That faded when I brought her down with my despair. “I wrote this for you,” I said, handing her a few folded pieces of paper, slightly damp from sweat. She began reading. Her tears accompanied a smile that I will never forget. “Thank you, Tucker. This means more to me than you know.”

According to Merriam-Webster, resilience is defined as “the capacity to recover quickly from difficulties; toughness.” My journey has not been quick. It has not been a road to recovery, but rather a sixteen-round bout with a heavyweight fighter. It’s not often that a challenger beats the champion, but when he does, it’s not because of his ability to recover quickly from the difficulties he faces; it’s because of his ability to absorb and feel the pain of each one, fueling the engine that drives him forward. I, the challenger, did not beat the champion, but I sure did absorb the punches. In that way, I knew I had won.

I would never be the Tucker I had once known, but, again, that was okay. I can’t say this was a happy ending. I still struggled, and continue to, every day. But that struggle became life. Each punch I absorbed fueled my identity discovery. 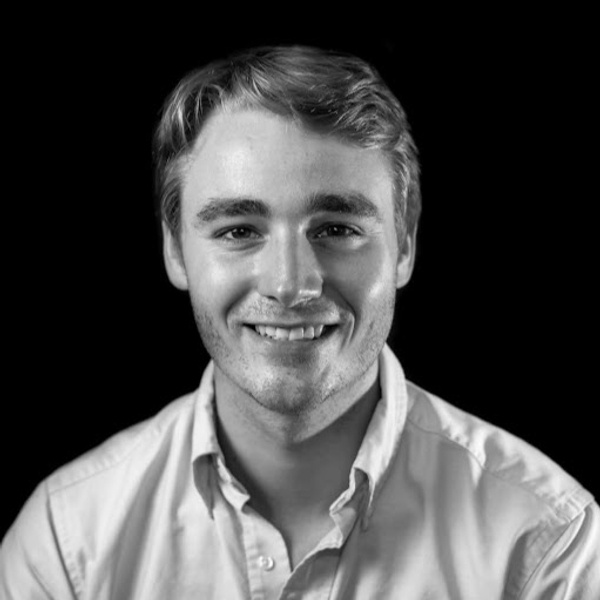 Tucker is a senior account executive at Inkhouse New York but remains an avid Boston sports fan. Although he misses his days as a soccer player, Tucker found a passion for storytelling and an eventual home at Inkhouse.