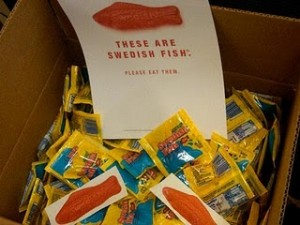 InkHouse VP of Operations Claims 18 in One Package, Drowning the Package Average of Seven

WALTHAM, Mass., (October 1, 2010) – InkHouse, a public relations and social media agency serving innovative technology, consumer and services companies, is pleased to announce that one of the individually wrapped Swedish Fish packages that were mysteriously delivered to their office is purported to have contained 18 Swedish Fish. All staff members have been consuming the delicious gummy candy, without abandon, for more than a week despite it being dropped off by a stranger who may or may not have actually worked for Cadbury.

“When Pat sent out an office wide email claiming 18 Swedish Fish, I could not believe it, it just didn’t seem possible,” said Meg O’Leary, InkHouse principal and co-founder, speaking of office record holder (and records keeper), Pat Monaghan, vice president of operations. “What was even more surprising to me was the number of people that hit ‘reply all’ and sent out inane emails regarding this latest development. I had no idea how strongly people felt about Swedish Fish. No one replies that quickly for other endeavors, like staffing the office on ‘work from home Fridays.’ ”

“As PR people, we are constantly keeping our ears to the ground to stay up to date on what’s going on in our clients’ industries. It enables us to proactively uncover new opportunities, engage the media and develop relationships with thought leaders,” said Beth Monaghan, InkHouse principal and co-founder. “Apparently we also like to eat candy and the mystery box of Swedish Fish has really opened my eyes to how much the folks in our office not only enjoy free candy, but how competitive they can get as to who has the most in one package.”

InkHouse staff members were quick to post photos on Twitter and Facebook at the outset of the Swedish Fish delivery and enthusiasm for the treat has not diminished. Since the original claim of 18 Swedish Fish in one package, another confirmed record bag was opened, as well as several others containing 10 or more. Cadbury officials were not reached to discuss this latest development, although InkHouse assumes they would say something along the lines of, “They seriously wrote a press release about this”?