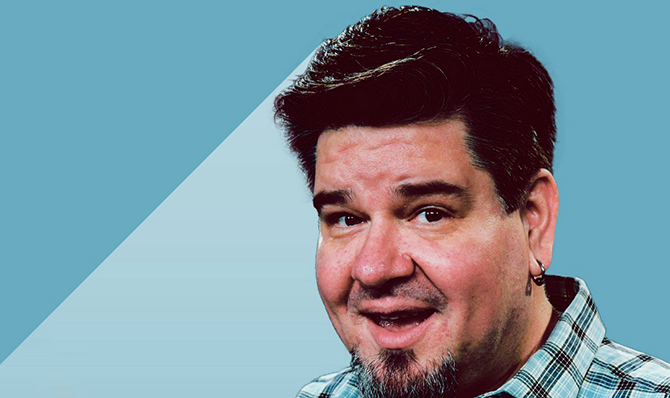 With VR and AR exploding onto the scene over the past year, InkHouse recently caught up with Tal Blevins, the new Editor-in-Chief of UploadVR. On January 30, UploadVR announced that Tal Blevins, a co-founder of renowned gaming site IGN, would be taking over as its new Editor-in-Chief and Head of Media. We spoke with Blevins to hear how the first few weeks on the job have been, the types of stories that catch his eye and the industry developments he is most excited to see in 2017.

Congratulations again on the new role Tal! How have things been going since starting at UploadVR?

Oh, it’s been going! There have been lots of moving parts since I’ve begun. I’ve been to GDC (Game Developer’s Conference) and Sundance, among other places over the past couple of weeks. It’s been a whirlwind, and at Sundance, a literal blizzard! Right now, this is a lot of fun for me as it is still a time of deep information absorption and a learning phase. Even with my experience at IGN in gaming, television and movies, I’m still learning a lot about VR and AR.

With GDC 2017 happening here in San Francisco just the other week, what were some of the things that caught your eye?

While I didn’t get any hands on time with it myself, the unveiling of the new LG SteamVR headset. However, our senior editor Ian Hamilton spent time with it and wrote a review based on his experience. It’s exciting to have a new, major consumer player in the industry and I’m looking forward to seeing more get involved down the road.

Now that we are almost a year into the first cycle of consumer products, it’s also good to see Oculus dropping prices on Rift and Touch by $200. What the industry needs to continue working towards is mass consumer adoption and this is a great step towards doing just that. Looking ahead, additional technological advancements that we need to see include better resolution and smaller, untethered headset units. We’ve also have seen great pickup with Sony’s PSVR, with the company announcing it has sold nearly a million units.

Obviously, it’s an exciting time for the VR and AR industries - what are the products or innovations that you are most looking forward to seeing in 2017?

2017 is going to be the year of content. New hardware and technology is fine and dandy, but without great content, we won’t see the industry move forward. For example, Oculus Story Studios’ “Dear Angelica” is an emotional, empathy engine that shows the power of the medium. The content puts you right in the middle of the story through its scale, use of color and other ways that makes you feel like you’re actually there.

I feel that we are in the next wave of the VR and AR technological revolution. I’ve been interested in VR and AR since the late 90s, but back then the redraw rate was like a mere 4 frames per second - it was horrible! But even back then, I saw the technology’s potential. Now it is great to see the gaming and interactive industries, which I’ve enjoyed covering for so long, being at the forefront of leading the charge for where the technology is going. In the next 10 years, VR and AR will be totally ubiquitous and will touch areas like mental healthcare, neuroscience and more. It’s awesome to see what was for a long time seen as just an entertainment medium moving well beyond that purpose.

Is there a process you recommend to VR and AR companies that are looking to get on UploadVR’s radar? What are your favorite types of stories to cover?

Make something cool! We are interested in seeing the industry drive forward, so stories about a cool next step of the technology attracts our attention. UploadVR has a big focus on “VR for good,” so we like stories such as how VR is helping to treat autism that hit a much broader audience than just someone who is already interested in VR. We always welcome pitches at tips@uploadvr.com, which we check throughout the day. We obviously get a ton of requests, but if there’s something cool that we’ve never heard of, we will reach out.

My mantra for UploadVR is that we’re champions of the industry, but advocates for the consumer. I desperately want to see this industry thrive and grow, but we won’t do that by being untrue to our audience. We always have to think of our end users and consumers, so we want to help them with navigation and discovery. There is so much being created in the VR and AR industries, so people need somewhere to help them navigate these spaces. There are things like the Oculus and PlayStation stores people can easily access, but there are also lots of homebrew things that are happening that we want to expose outside of gaming and interactive experiences. I want us to capture as much emotion as possible in our stories. VR is the most immersive-rich platform we’ve ever seen, so I want that to be felt in our writing. UploadVR isn’t a cold, technical journal, it’s about the experience and we want that to come across.

How can PR professionals be most helpful in your reporting and what does an effective pitch look like?

Be very specific - we get a lot of nebulous pitches that aren’t very clear. We get so many pitches that we have to pick ones that will be of most interest to our readers, so we want to hear about organizations or people doing entirely new things. This may mean new content, audio, or hardware, but essentially we want to understand the changes that are happening that will have the biggest effect on people.

To that effect, the best pitches explain how your product or updates affects the VR industry, or even better, society as a whole. Obviously, we will make our own inferences as well, but we love to hear how we expect something may be used. Will it impact the automotive industry, have a light industrial use, impact consumers, or address a massive societal problem? These things are helpful for us to get context.

What is your biggest PR pet peeve?

Similar to my previous answer, we get a lot of pitches that are too nebulous. Even if it’s cool, if I can’t understand your pitch off the bat, I may not end up devoting resources to it. I don’t like when PR people just want to get on the phone to explain a pitch to me. If you can’t get to the crux of what you are pitching in an email in a sentence or two, I may pass as I have too many things to pay attention to. A good pitch should have a great headline, catch my interest early, clearly explain what is being pitched and why it’s important to society.”

Is there a unique deadline structure that UploadVR reporters typically work under?

UploadVR is an up-to-the-minute publication, all day, everyday. We are fast, but there are a plethora of stories out there. We like to have as much time as possible to write our stories, but an article based on a press release is obviously different than if it's going to be a more in-depth story. In general, we prefer to receive press releases at least 24 hours in advance of the news going live. For bigger stories, we prefer as much advance notice as possible so that we can coordinate not only with our writers, but also in case there is a video component, if we want to get you into our studio or arrange a live stream. For product reviews, we want those to hit as close as to when the product is released, as we want to serve as a guide for our readers.”