PR and Social InkLings for the Week of November 28

This past week in the wonderful world of social media was fitting for the bustling pre-holiday season: articles covered everything from Facebook’s IPO to Britney Spears on Google+, and we were left feeling a little like we do after an impromptu trip to the mall—overwhelmed, but somehow satisfied. Below, I share a few highlights:

Everything You Ever Wanted to Know About the Facebook IPO

There has been a flurry of news surrounding the Facebook IPO—with analysts and users speculating: will they, won’t they? Recently, Facebook officially announced that the company will go public between April and June of 2012. Most of us know that Zuckerberg and the gang aren’t exactly struggling in the revenue department (the company is valued at almost $100 billion) and might wonder why they’re moving forward with this plan. This Mashable article breaks down the pros and cons of going public.

It seems as though every day, we hear about new startups forming and getting funded. Many “starters” have taken advantage of today’s ever-evolving tech environment by mastering new technologies and packaging them into products. At TechCrunch Japan’s Tokyo 2011 conference this past week, TechCrunch Editor Erick Schonfeld’s talk focused on this topic, as he compared the startup “boom” to a new Cambrian Explosion, in which many species are created. In this video, Schonfeld dissects why and how many of these species thrive and how others quickly became extinct. 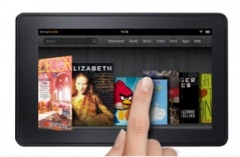 Holiday shoppers -- If you’re looking for the Amazon alternative to the Barnes and Noble Nook, you’ve probably been inundated with news about the Amazon Fire. Coming in as the #2 tablet (second to Apple’s iPad, of course), the newest edition to the Kindle family is flying off the shelves at a rapid rate: 3-4 million already sold, to be exact. If you’re not sure if the Fire is Christmas stocking worthy, read on here. For more gift ideas for the tech gadget lover on your list, check out GigaOm’s suggestions.

Once primarily dominated by techies, Google+ is now seeing an influx of celebrity accounts. So, who currently tops the Google+ charts? None other than Britney Spears. In our last round-up, we broke down the steps for creating a Google+ page for your brand, and between her CDs, movies, tours and product lines, Britney could absolutely be considered a brand. So, while we’re not suggesting that your business needs to post photos of your MTV awards or of the people camping out to see you, Miss Spears’ popular page may serve as some inspiration.

If you’re a regular YouTube viewer, you may have noticed its new look. Last week, the video hosting site introduced a new homepage. As part of the largest redesign since YouTube’s founding in 2006, users will notice a shift towards a more personalized experience that focuses on video subscriptions and video recommendations from Facebook and Google+. But the homepage has been receiving some criticisms—read on here.