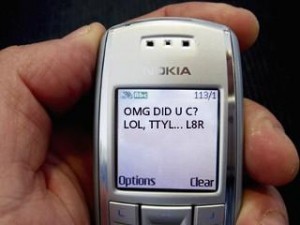 A few weeks ago one of my coworkers passed along an article from The Wall Street Journal, Is This the Future of Punctuation?!  It’s an entertaining read about the historical uses of punctuation marks and different theories on how punctuation rules might evolve in the Internet age. The author, Henry Hitchings, begins by explaining why some folks get so worked up about punctuation:

People fuss about punctuation not only because it clarifies meaning but also because its neglect appears to reflect wider social decline. And while the big social battles seem intractable, smaller battles over the use of the apostrophe feel like they can be won.

This observation struck me in how well it describes many reactions to social media and other new forms of digital communication. Texts, IMs, Facebook, Twitter, etc. have all been blamed by some critics as contributing to the downfall of literacy in the modern world, conjuring dystopian images of roving bands of youths communicating via weird alpha-numerical hybrid codes (Gr8 C u l8r @ skul :-P) Even for the non-grammatically obsessed, deviations from the established rules of punctuation and grammar carry weight because they seem to indicate a break from tradition.

What Hitchings’ article demonstrates so effectively is that in some ways this “tradition” of long-established rules for grammar and punctuation is largely imagined, as these things have always been in flux. Punctuation marks (below) such as the pilcrow and the hedera enjoyed temporary places in common usage before fading from view, and new marks such as the snark were suggested to represent rhetorical questions – and more recently to distinguish irony or sarcasm in electronic communication. Apparently, punctuation comes and goes.

The reality is that language evolves in conjunction with culture, and change is not always a bad thing. Digital communication and social media have produced new opportunities.

Social Times ran an excellent article recently, How Twitter Can Make You a Better Writer. Tight character limits force users to follow the cardinal rule of Strunk & White – “Omit needless words.” These limits can also encourage users to be more creative and precise with word choice: “Why would you waste any of your precious characters on ‘very’ or ‘really’ when you could be saying something more substantial?” We tend to think of contractions as bastardizing words, but there’s a vibrant literary tradition of contractions producing some wonderful results (including one of my favorite words – “mud-luscious” – thanks to e. e. cummings.)

Rules for grammar and punctuation are vital for clear, effective and consistent communication (just ask  my coworker @SteveVittorioso, who happens to be an AP Style guru!) And as technology continues to evolve and innovate, the way in which we communicate needs to change as well. Let us know what you think in the comments below!