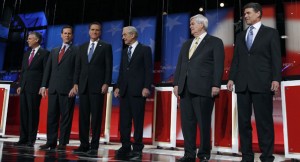 Social media played an integral part in President Obama’s 2008 campaign, generating hundreds of millions of dollars and rallying multitudes of new voters across the country. That year, David Carr of the New York Times wrote, “By bolting together social networking applications under the banner of a movement, [the Obama campaign] created an unforeseen force to raise money, organize locally, fight smear campaigns and get out the vote that helped them topple the Clinton machine and then John McCain and the Republicans.”

Four years later, social media is playing an even larger role in “Decision 2012,” as Republican presidential hopefuls take their messages to the Web with fervor to create buzz, mobilize voters and officially kick off the election season with tomorrow’s highly anticipated New Hampshire primary.

Underscoring social media’s critical importance in the Republication presidential nomination process is a 2011 study from Pew Research Center’s Internet and American Life Project, which indicates that 40 percent of Republication online users leveraged social media during the midterm elections in 2010 to get smart on key issues and become more politically involved.

Front-runner Mitt Romney’s team has been hard at work promoting New Hampshire-focused YouTube videos, guest blog posts and photos on his New Hampshire Web page.  With 239,562 Twitter followers, the candidate’s verified handle was used heavily to promote updates and highlights of the #NBCFBDebate in Manchester, N.H. According to Mashable, Romney’s campaign is also using popular services like FourSquare and Tout to engage New Hampshire supporters.

Rick Santorum’s website currently features a “New Hampshire Moneybomb” page, where supporters are encouraged to create their own personalized fundraising pages to help raise $1 million in just three days. The page includes a widget that shows how much money has been raised in real-time, while showcasing names of proud donors. Santorum (and team) is also regularly tweeting New Hampshire-specific messages from his Twitter handle. Yet despite a concerted social media push, Mashable reports that Santorum is still being haunted by his “Google problem.” When searching for “Santorum,” the first result to show up in Google is an inappropriate jest made by columnist and gay rights activist Dan Savage in response to Santorum’s controversial comments about homosexuality made in 2003. Though Santorum has asked Google to remove the search result, Google has yet to do so.

Jon Huntsman is focusing much of his attention on New Hampshire, and his website and social media accounts reflect this, featuring countdowns and requests for donations to bolster Huntsman’s efforts in the state. The Huntsman team has also attempted a “Twitter Takeover,” encouraging supporters to collectively tweet more than 1,000 times per day using "@JonHuntsman," "Jon Huntsman," "#Jon2012," and  "#JointheHunt.” Though an interesting effort, the tweets are not moderated, so many negative tweets have populated Huntsman’s site alongside those of supporters. Also extremely active on Twitter are Huntsman’s three daughters—Liddy, Abby and Mary Anne—who tweet from @Jon2012girls and currently have a whopping 21,859 followers.

The New York Times reported that Newt Gingrich is taking a state-specific approach to social media, touting a website, NewtHampshire.com, along with New Hampshire-focused Twitter and Facebook accounts. Since the Iowa caucus, Gingrich’s team has relied heavily on Facebook to recruit volunteers to make phone calls to potential voters in many of the early-nominating states. People are empowered to make calls from their own homes and through an interactive widget, their Facebook friends can see that they’ve made calls. According to Gingrich’s New Hampshire state director Andrew Hemingway their team is doing more calls per hour than any campaign in the state.

Though Ron Paul has a massive online following and is raising significant funds through online donations leading up to the New Hampshire primary, the candidate recently came under fire for a questionable Twitter post. The tweet, which showed up on Paul’s verified account following the Iowa caucus read: “@jonhuntsman we found your one Iowa voter, he's in Linn precinct 5 you might want to call him and say thanks.” Yikes. PRWeek’s Steve Barrett writes, “When questioned by Soledad O'Brien, host of CNN's new morning Starting Point slot, Paul admitted he gets help with his tweeting and gave every indication of being someone who didn't have a clue what Twitter was about and how significant it can be as a communications tool.”

Rick Perry’s website – rickperry.org – seems to skip over New Hampshire entirely and focuses instead on the Jan. 21 South Carolina election, with an “Action Center” page geared toward the state. His Facebook page also currently focuses on South Carolina as the next leg of the marathon, and his Twitter page – which his team had leveraged strongly for winning support in Iowa – is also void of New Hampshire-specific language.

Just for fun – if Twitter was a poll and numbers of Twitter followers correlated directly with votes, here’s how things would pan out (as of today):

With less than 24 hours to go, we’ll soon find out who comes out on top in nearby New Hampshire. And it will be interesting to see how each of these candidates’ social media campaigns evolve over the next few months as the race gets closer and tension runs higher.