An Interview with Changemaker Iman Abuzeid: CEO and Co-founder of Incredible Health

This is the first post in our new InkHouse Changemakers series, which will feature leaders, creators and innovative thinkers who are effecting positive change. I’ll talk to people who are creating new narratives and changing old ones -- whether it be social, technological, legislative, environmental, organizational and much more.

For our first interview I had the pleasure of virtually sitting down with Iman Abuzeid, the CEO and co-founder of our client, Incredible Health, a career marketplace for healthcare workers -- hospitals and health systems use the platform to hire nurses in permanent roles in less than 30 days (it usually takes 90 days or longer). We talked about disrupting the healthcare model, systemic racism when it comes to raising venture capital and in the technology industry overall, and the power of speaking up. Iman deserves a bullhorn. 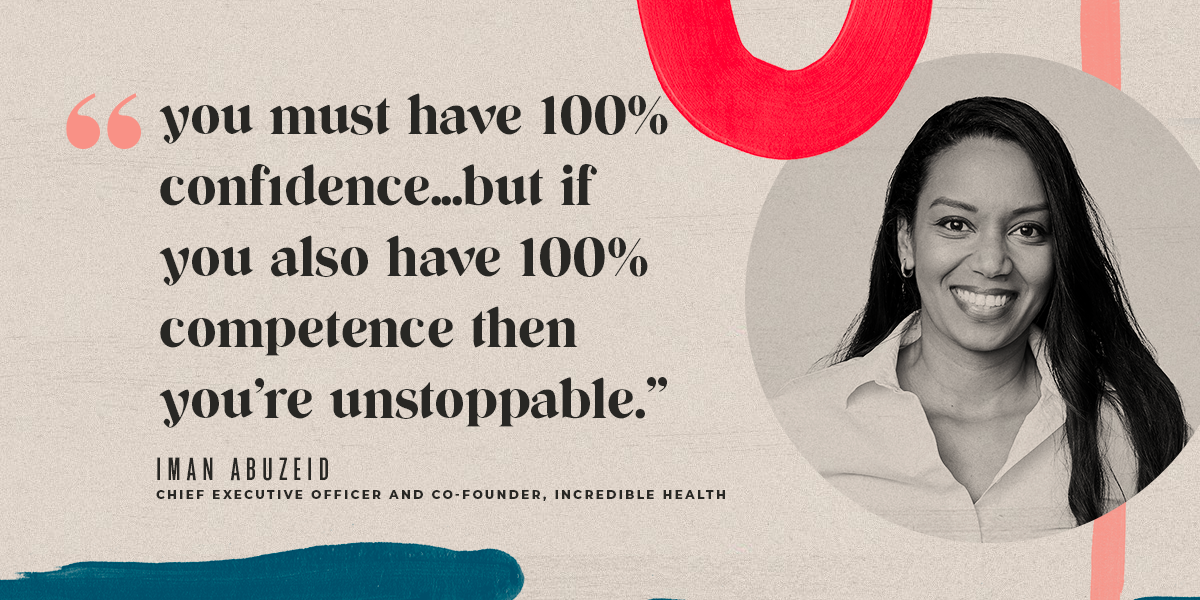 Beth: How has COVID-19 affected your business?

Iman: We did a study and less than 2% of nurses felt their hospitals were very prepared for COVID-19. They experienced shortages of personal protective equipment (PPE), they were and are experiencing additional workplace stress (on top of the normal stress they have as nurses). Hospitals saw a big negative impact to their revenue because they were asked to pause elective surgeries. They have been spending their time getting prepared, which includes setting up their infection control protocols and getting enough PPE for staff.

COVID-19 drives a higher need for ICU nurses as well as emergency department nurses -- the hiring of these nurses went up by 1.5 to 2 times on the Incredible Health platform. When COVID-19 is impacting a city hard, we see a drop in demand for other types of nurses -- such as OR nurses.

Beth: How did you identify and fill the nursing gap?

Iman: I’m a medical doctor, although I don’t practice anymore. A lot of my family members and friends are also doctors and surgeons and were often complaining about understaffing. At the same time -- my co-founder’s (a software engineer) sisters are nurses and were saying: “I’m experienced and qualified but it still takes me three months to find a job.” It didn’t make any sense. When we looked into it -- a lot of the processes and software that is used has not changed since the early ‘90s. The market overall is experiencing severe labor shortages: By 2024 we are going to be 1 million nurses short. It is the biggest skilled labor shortage in this country. Healthcare is the number one labor sector in the country by number of workers -- 1 in 8 Americans works in healthcare. Our demand keeps going up as our population is aging and we don’t have enough workers in the system.

Beth: You are a female person of color and you somehow raised money from venture capitalists -- how did you do that?

Iman: I raised over $17m in venture capital from top firms. The statistics show that the odds are stacked against you when you’re a female founder and a Black founder. A Black, female CEO gets .04% of venture capital. Honestly, for people in my cohort I think the most important tactic is this: you know the statistics and odds are stacked against you and you know biases exist in the system -- you can acknowledge that but then need to move on because that information will distract you. Your counterparts and your competition are not thinking about that. You can’t let that stuff mess with your brain. A lot of fundraising has to do with getting the process and content right, and assertiveness and confidence.

Beth: How do you put that out of your head?

Iman: It’s almost like keeping your eye on the ball -- you have to stay focused on your mission and the goals you’re trying to achieve. At the end of the day that’s bigger than any of this -- bigger than prejudice. It’s my role to be the counter narrative to the system that already exists. The biggest thing I can do to make progress in this industry is be successful.

Beth: A favorite VC once said, “Confidence is more important than competence,” which I don’t necessarily agree with. Thoughts on that?

Iman: You must have 100% confidence...but if you also have 100% competence then you’re unstoppable.

Beth: You said your role is to be the contrarian narrative -- how do you view your life’s mission in terms of change?

Iman: First and foremost, I’m trying to create the market-leading, category-defining company in healthcare labor. I’m already in the process of trying to change that industry and that system. Which is a pretty big feat in and of itself -- changing an old school industry and how it does hiring (so the workers have the upper hand instead of the employers). That’s 97% of my time. For the remaining 3% of my time, I’d love to make an impact on the tech industry overall. It’s been very slow and very resistant to change on diversity and other issues. There are several Black founders that I mentor and support; I have quite an extensive network of CEOs and investors, so when people need help fundraising or figuring out sales I do introductions. A lot of it is behind-the-scenes work. More recently, with the support of the InkHouse team, I have been speaking about change, race and gender in the press.

Beth: You recently published a company letter that addressed institutionalized racism and what Incredible Health is doing about it. I think all companies struggle with this issue being defined as a political issue, but I loved what you said about racial bias being a human rights issue. What has the feedback been?

Iman: We have clients in all areas of this country. I’ve gotten nothing but positive feedback. Some have called and said, “Thank you so much for being so public about this -- no one around me is saying anything about this -- thank you for taking a leadership position.” That means a lot coming from hospitals -- and we have to remember that 20% of nurses are minorities, so on social media many nurses have said thank you for taking a clear stance.

Beth: At InkHouse we study how to bring people together. Tension and controversy get awareness but don’t always unite people. One thing I think you did really well in your letter was unifying your community without softening the issue.

Iman: I have a definite slant toward action and optimism -- you have to have that as an entrepreneur. So for me, the most important part of that letter was the action plan.

Beth: What has been the greatest obstacle to the change you want to make with Incredible health?

Iman: In the very beginning -- making sure we came up with a solution that was at least 10x better than what was already out there. And it looks like we’ve done it, and we keep improving our product and distribution. Our company is growing -- it’s working. It’s the only way to cut through all the noise. The inception of the company when we were trying to figure out what the solution should be was the biggest challenge -- of course that’s a constant journey -- that’s the bar we hold ourselves to and have to maintain.

Beth: In PR (roughly 8% racially diverse) -- we added another company value around how diversity drives the best ideas. Looking at your values -- diversity is not called out -- but then I realized it's baked into every value you have.

Iman: That was intentional -- there’s a huge body of research that shows that diversity drives business results. A lot of that has to do with getting people with different demographics. When you do that you end up with diversity in thought and so then problem-solving is better, and you don’t have as many blind spots. My philosophy on this is some companies choose to do this as a “side show” a separate value or diversity office. When it should just be fully embedded in everything you do.