Digg has done what most social media platforms are unable to accomplish, much to the chagrin, I’m sure, of MySpace’s would-be knight in shining armor Justin Timberlake – Digg has returned from the dead.

Gizmodo’s Sam Biddle reported that “Digg had once attracted a (rumored) multi-hundred million dollar bid from the likes of Google,” and ended up selling for a measly $500,000 to Betaworks in July, after the site, in Biddle’s words, just went to hell.

In the PR world, we mourned the loss of the social news website, which allowed us to share client content and news, with the potential of driving thousands of unique visits to their websites and blogs. Sure, Digg promised us a full recovery, but you’ll have to forgive us for not believing that, in six weeks, there would be follow-through. Just look at MySpace and Friendster.

Well, we were all very, very wrong. Digg is back and it is one handsome devil. 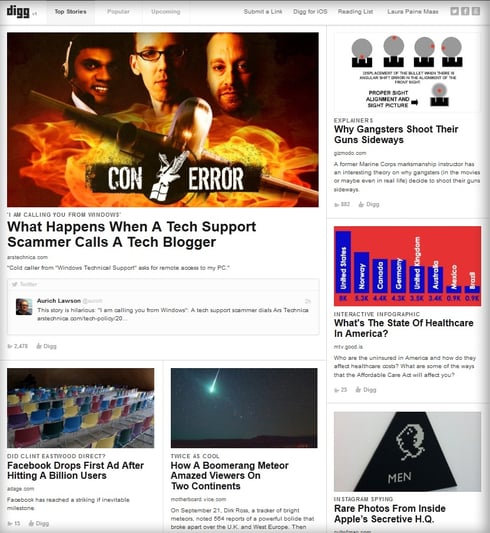 The new site is beautifully done, incorporating some of the best design elements of Pinterest and Paper.li pages, with ease of use through Twitter and Facebook logins.

The 10-person rescue team also included apps for iOS devices in their recovery plan, allowing users to share, scan and call up their reading lists with ease, whether they’re using an iPhone or iPad. Another thoughtful touch? If you’re logged in through Twitter, you can Retweet, Reply to, or Favorite tweets displayed on the Digg homepage.

The basic feature of Digg, the thumbs up or thumbs down vote, is still intact, and the more Diggs, Facebook shares and tweets a story gets, the higher it will be on the homepage. New to the site is the Digg Score: the sum number of digs, Facebook shares and tweets for a story. This is also known as an analytics dream for hard-working PR professionals and digital media strategists everywhere. The development team promises an opportunity for commenting, but notes that they are taking the time to do it right.

According to Digg’s blog, last month the site was already seeing 125,000 daily active users with more than 1 million people checking out the new Digg since its launch. Additionally, Digg users visit approximately 1.4 timers per day from their web browser and approximately 2.3 times per day on their iPhones.

At InkHouse, we’re excited about the reincarnation of Digg and getting back to sharing on the site. We’re always looking for ways to extend the reach of our clients’ blog posts and media coverage, and Digg is a tool that fits naturally in our expansive toolbox.