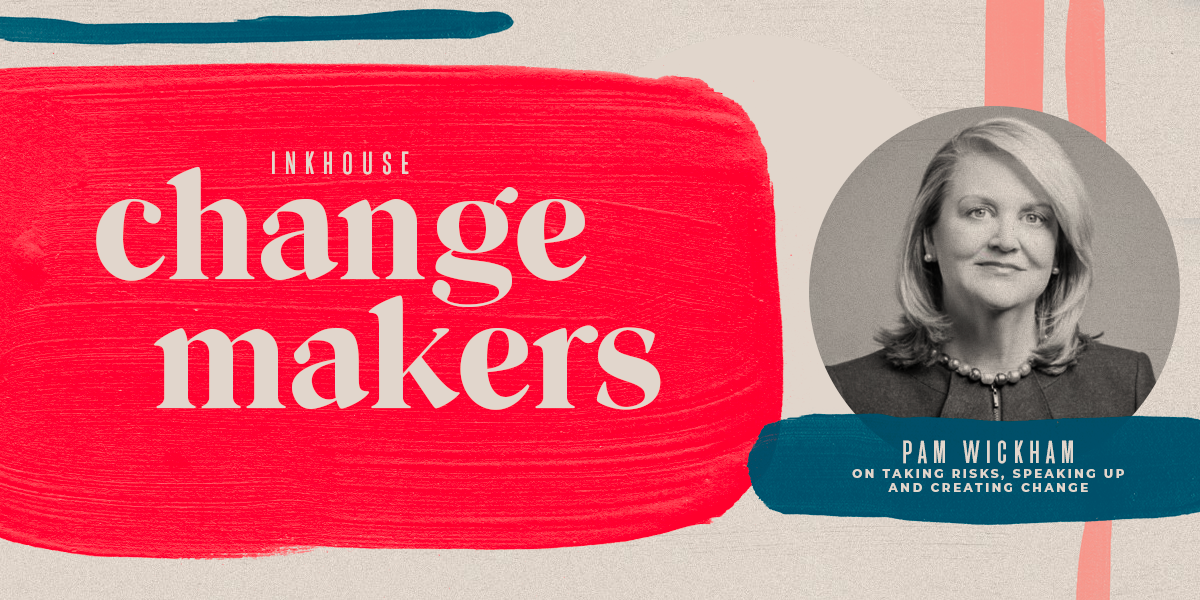 Pam Wickham serves on the boards for the JFK Library Foundation and the Mass Conference for Women. She has held senior communications roles at Fortune 500 companies, including HP and GE, and was named a corporate officer at Raytheon in 2005. Raytheon was one of Inkhouse’s first clients -- we had just upgraded from working around a kitchen table to hiring enough people to fill a small office and Pam took a chance on a small, women-owned business. Pam’s willingness to take a risk on us early gave us the credibility and experience that has helped fuel our growth. She walks the walk, passionately advocating for women’s equality and empowerment and I am grateful to have called her a client and a friend. Below is our Q&A.

You’ve written about women playing it safe versus taking risks and have said that it's actually more risky to play it safe. Can you talk a little bit about what you mean by that?

Wickham: I always found that if you play it safe you’re protecting yourself -- your career path, your current job, even your salary -- and not actually advancing your career. There is a fear factor of losing something when taking a chance to step forward. “I’m afraid of getting fired” is a common refrain, but what always goes through my mind when I hear this is: “Why would you want to work for somebody who would fire you because you had an idea or because you took a risk?” Unlike our male peers, I believe women have been taught there's more risk than reward in taking chances. I’ve experienced just the opposite -- there has always been 100% more reward than risk throughout my career. We must push past the cultural and societal norms without losing the traits that make us so successful in business -- such as empathy, group thinking and collaboration. When we are willing to challenge not just the environment we’re in, but ourselves, we find our greatest success.

What is an example of a woman “getting past” societal norms?

Wickham: Alexandria Ocasio-Cortez’s recent speech to the House about what she’s unwilling to tolerate from a sexist society. Everyone should watch that speech, regardless of your political party. What she's talking about is our culture -- how men in power often react to women in power and the tools that are used to subvert power, respect and authority. AOC wasn't having it. And, in my career, I wasn't having it either. It’s not that I haven’t been called the “B word” -- I have on many occasions by men and women -- but that's just a tool to try and put you back in “your place.” Which is really their place for you. The challenge for ambitious women is not to let others define your place. Own your own chair.

Wickham: I took a big risk leaving GE and going to HP. I moved from London to Palo Alto and I realized quickly it wasn’t the job for me. But that didn't deter me or make me feel like a failure -- it allowed for a lot of self reflection around why I took the job in the first place, why it wasn’t a good fit and could I learn something from the experience. If I hadn't taken that risk I likely would not have ended up in the position that made me the happiest that I've ever been in my career.

Every single career decision you make will have inherent risk. Once you’re comfortable with that is when you can begin to accelerate on your career path.

You've spent the bulk of your career in the tech industry, which is notoriously and historically dominated by white men. I'd love to hear how you have seen things shift since you got into the industry and how, more importantly, did you navigate that?

Wickham: At the very beginning of my career I was dealing with men in authority positions, instead of female role models. My first significant communications role was with a heavy industrial business with mostly male customers. I spent so much time thinking about the audience that we were trying to communicate to (also mostly male), that I learned what the triggers were, how to avoid them and how to leverage certain approaches for success. Throughout my career, there have been men who were supremely supportive and respected my talent -- and some who haven’t. You learn to look for the former and avoid the latter.

We hear a lot about how when there's an underrepresented group, they need to see people who look just like them in desired roles or they need a sponsor who will help them get there. It sounds like that's what you had.

Wickham: I absolutely had support from men in positions both above me and from those who I was managing. But my first big break came from a woman. Beth Comstock had just gotten the top communications job at GE, and she was going around to the businesses to meet the leadership teams. I took a risk and sent her a note to ask if I could meet her -- to my surprise, she agreed.  After our meeting, she continued to show an interest in my career, eventually hiring me for her corporate team. She assigned me to work with Jack Welch and gave me oversight of GE’s emerging digital platform -- and the rest is history. So, for all the male support that I had, and all that I learned on how best to work with executive men in and out of my peer group, it was a woman who reached down and pulled me up. That’s why representation is so important.

One of the things I respect about you is that you always stand up for your values, even when it's hard and even when it may not be the politically correct thing to do. Can you talk about how you found the confidence to do that?

Wickham: I've always been sort of a rebel when it comes to speaking my mind. That's not anything new (my high school teachers would agree with that assessment), but a watershed moment came for me at a diversity conference at Raytheon. I sat in a meeting where our  internal GLBTA champion took out a picture of her partner and put it on the table in front of the leadership team. She said, “If I can't put this on my desk at work then do you know who I am?” It was the first time I really thought about how people have to hide themselves at work. And that’s not just wrong -- that’s bad business.

Soon after, I had dinner with the head of our diversity efforts at Raytheon. He asked me why I wasn’t embracing my role as a senior female executive in the company and told me I was leaving something important on the table. That took me aback -- I had fought so hard to be an executive. I didn’t fully understand the importance of being a female executive -- a role model, a mentor and a champion.

What is the biggest obstacle in making that change happen?

Wickham: Buy-in. I like to talk about how the white blood cells come out to kill a new idea, because change is hard and change requires effort and people worry about how change will impact them personally. The fear factor is very inherent in trying to implement change. You will get skepticism and push back, which makes buy-in your key to success.

I always said to my team, “You’re on a change management train -- where do you want to sit?” The passengers at the front of this train will get the most wind in their face, the most resistance, but they also have the clearest vision of what's ahead. They have their hands on the steering wheel. The majority of the passengers will be in the middle of the train -- enjoying the ride, looking out the window, anticipating where we’re going. Then there are passengers at the back of the train that are constantly pressing the brakes. They are asking, “Why are we going this way? Do we need to go this fast? How many people are on this train? What's happening?” You have to be able to communicate to the entire train when you're driving change, but the key point is that if you don't have a vision and a team willing to steer through the obstacles at the front then you’ll struggle to reach your destination.

I’ve been lucky in my career to have a lot of teammates in that front car with me. That’s made all the difference in my journey.