How to behave on social media in the wake of a tragedy: Ask yourself these questions

In the horrifying moments after the Boston Marathon bombings, after ensuring that everyone we knew was safe, we told all clients who might have scheduled tweets to shut them off. Some of them already had and some were shocked that it took almost 20 minutes to finally stop the process.

Thankfully, having a business Twitter blackout has become standard procedure during any crisis because a brand’s social chatter – even if it’s not self-promotional – seems wrong when people are trawling for vital information about breaking news. Going silent is the digital equivalent of giving a fire truck the necessary 500-foot perimeter to do its job. Get out of the way of the #disaster hashtag.

But once those tweets are down, condolences are expressed, then what? Companies grapple with this question every time there is a major news event. In the wake of Superstorm Sandy Beth did a blog post about how PR professionals should act. The headline there: keep it classy – and never capitalize on the tragedy. Still, that seems to be a hard thing for some to do and there are always examples that surface when the recipient of an unfortunate pitch publicly shames the sender. Like this one. 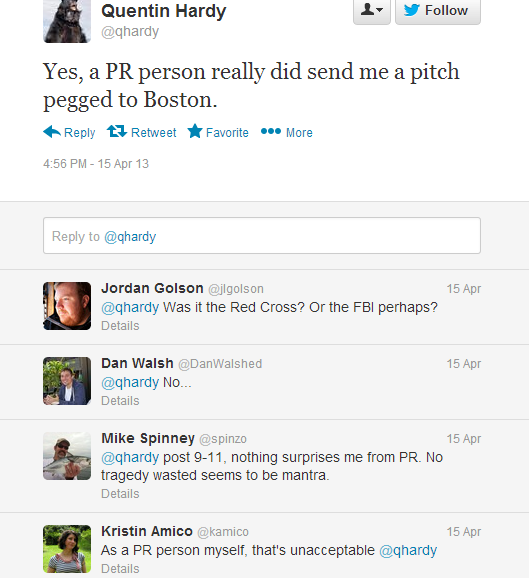 Sometimes, these flubs are the result of naiveté. But they are still a no-no.

Why is this so hard? When a business or person is trying to decide whether an approach is right, here are some questions to ask: 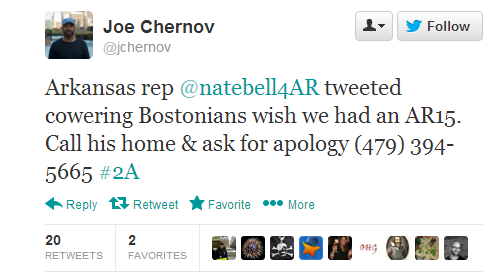 4. Will this look like it came from a business or from a human? Whatever you say or do through social channels during or after a tragedy, know that customers are highly sensitive to companies jumping on a bandwagon. If you have something heartfelt to say, say it! But if it feels shallow or forced, be prepared to be called out for it. Two examples of this: Epicurious tweeting about cranberry scones in honor of Boston (see above). It seemed so out of touch and striving to be relevant that journalists actually made the tweet a story.  And then they had to apologize (see below).

Another example: Vineyard Vines using its trademark whale (in all its pink and smiling glory) for a piece of post-Marathon social content.

But the backlash was swift on the brand’s Facebook page and also drew a quick apology.

The Vineyard Vines attempt failed because it didn’t see relevant enough. Of course, the Boston Red Sox’s B Strong logo worked because the “B” that is the Red Sox brand is already baked into the local culture.

Meanwhile, this one Facebook image, from Rue La La, seemed more genuine; the tone was right.

5. Is this helpful for the general public or self-promotional? In a time of crisis, many businesses feel irrelevant. And often they are. Organize internally to raise money for a related charity, or use your strengths for doing good.  It’s fine to use social media to rally people to such causes or to spread the word for others, but choose your words carefully. And ask yourself honestly the question from #4.