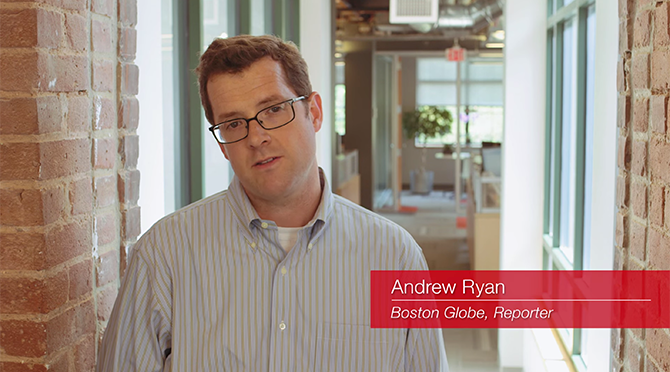 We had a welcome visitor to InkHouse recently – Boston Globe City Hall reporter Andrew Ryan. Ryan, who’s worked at the Globe since 2006, was one of the first online-only reporters at the Globe when it was transitioning from print-only to the digital-print hybrid that it is today. Before joining the Globe, Ryan wrote for the Associated Press in Boston, the South Florida Sun-Sentinel in Fort Lauderdale, The Day in New London, Conn., and the Highbridge Horizon in the Bronx.

Ryan talked with InkHouse in our offices about the competitive news landscape in Boston, what makes a good PR person, and that time he tweeted from the courtroom about fugitive gangster Whitey Bulger. (The responses are edited for brevity)

- Who are your biggest news competitors? In the past, the Globe’s competition was more cut-and-dried: we competed mainly against the Boston Herald. Nowadays, it’s a fractured news landscape and the Globe and BostonGlobe.com compete against many other outlets including the Herald, the New York Times, Statehouse News, public radio stations such as WBUR and WGBH, and even Twitter.

- How useful is Twitter in your job? Twitter can very useful. When Whitey Bulger was arrested and brought back to federal court in Massachusetts, there were no cameras or microphones or phone calls allowed so my job was to report the court proceedings as they happened on Twitter. The downside is, Twitter can be an echo chamber. Just a few people can make a lot of noise and it can be hard to measure what the popular sentiment really is. So it can be misleading.

- What impact is video having? It’s interesting. Some newsmakers now try and bypass the media completely by producing their own high-production-value videos and sharing them directly with their audiences. It’s an attempt to control their message and not let the media control it.

- What makes a good PR person? Responsiveness. If a reporter calls, be available quickly. Tailor your pitch to the person you’re covering and the type of story that the outlet covers – even the section of the paper that you’re trying to get into. That’s much better than sending mass, generic pitches that look like you’re throwing ideas against a wall to see what sticks. And if you want to be included in the story, don’t send long, formal comments by email. They make for boring copy and are likely to be left out.

- How do you like to be pitched? Email and by phone are the best way to send me story ideas. The mornings are best when I have more time to talk and to think about a story. The afternoon especially after 4 p.m. is a “pinch point” for us news reporters. That’s the worst time when we’re on deadline and finishing stories.

- What do you love about reporting? I like my job because it’s different every day. I can explore and dig in and learn about things. I can witness things firsthand that few people get to see.