The Rosemary: An Employee Essay From “Aren’t We Lucky?”

I wasn’t sure the corner I had picked in my small, curbside yard was working for the rosemary plant. I had tucked it partially under a tree for shade, but the southwest afternoon sun exposure was clearly taking a toll on its slightly exposed roots. I moved it in April, the month I thought all plants could handle change and unintended neglect. It needed a change from the pot on my back patio, where it was slowly languishing. I started obsessively watering it every evening after the sun dipped behind the houses across the street, to avoid inadvertently burning the leaves. But still, it wasn’t looking so great.

I can’t really explain my fixation on this small bush. I’m not a skilled gardener, but I love the idea of fresh herbs and vegetables and felt like this example in my humble urban yard would sit perfectly at the intersection of effort and reward. Yet here I was, fretting. 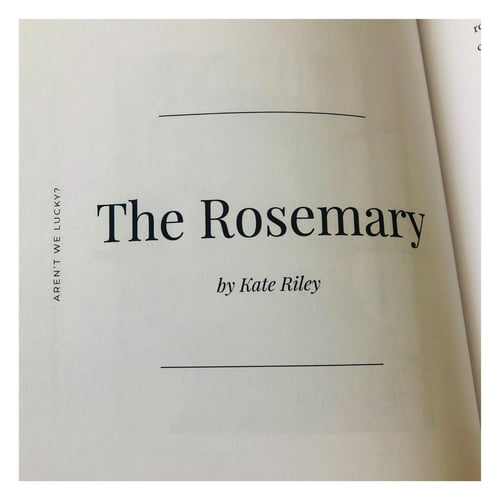 Maybe it’s because April 2020 was a really weird time. For me, for the world, for daily life. I had started the year with a new job, which created momentum for me: new routine, new people, new challenges. But almost immediately the world shut down and all that momentum got channeled through a Zoom screen and a Slack channel.

Life was suddenly constrained to the plot of land I inhabited, and I needed ways to express the traits it seemed we all needed the most: hardiness, versatility, with maybe a pinch of elegance. If I couldn’t change my circumstances, at least I could change the rosemary’s.

I tried other things, too. I built a new, raised garden next to the rosemary so I could still feel accomplished even as I watched the rosemary struggle. My toddler, Elliott, helped me plant tomatoes and squash and lettuce; he decided that adding rocks and gravel to the vegetable bed would be his special contribution. Those plants flourished on a relative scale, but it was always the rosemary that caught my eye. I refused to let it die alongside all the other aspects of life that perished during the pandemic.

Sometimes I wonder why I couldn’t have just watched TV. Part of me just couldn’t become stagnant and content as I entered the familiar patterns of many years of marriage and confronted the daily requirements of a young family anchored to our home. It was a kind of routine that frightened me.

My toddler was at home with my husband and me for those spring months, and I remember a lot of walks, doors thrown open to the sunshine, and adjustments to our new normal. The days stretched into weeks and then months. We would find things to talk about that didn’t always center on the mundane “Have you tried the enhanced video feature on Zoom?” or “I think my favorite face mask is from Marine Layer.”

As time seemed to slow down over that season and the excitement of my new job gave way to the darkness of the pandemic, I came to realize that my inner growth and resilience were just as important to nurture. Instead of leaving home every day to experience the energy of my city and draw inspiration from other people, I watched from my second-floor home office window as my little garden slowly transformed. My life had been reduced to a miniature scale, to moments gazing out the window in between Zoom calls. But by becoming more attuned to the small changes in our garden, I saw that it was still life.

At the beginning of the pandemic, our daily walks with Elliott mostly involved the stroller; as the weeks wore on, he became stronger and more agile. He graduated to a little balance bike, enjoying his newfound independence and stopping to marvel over everything from ADT security signs to the feel and smell of the neighbor’s rosemary. Our neighbors halfway down the block have a large, established, and fragrant rosemary bush growing in front of their home, in between the curb and the sidewalk. I kept a watchful eye on our rosemary for similar signs of growth, aroma, anything. Instead, we marveled at the neighbor’s plant and I sneakily snipped a stalk or two whenever I needed some in the kitchen, more resolved than ever to keep our plant alive.

Like most people, I established my coping mechanisms early in life. I developed strong roots of survival and self-reliance and the ability to compartmentalize everything. I was the rock whom everyone else could rely on, giving all my energy and strength to supporting others. For a long time, this served me well and created an impenetrable shield that allowed me to withstand grief, heartbreak, fear—like when both of my parents were battling cancer and divorcing at the same time. Those roots were unmoving and unyielding. They made me strong. But at some point I realized they were keeping me too firmly in place. I was holding on so tightly to my ability to ignore the hard parts of life that I didn’t let myself grow and evolve with each experience. It wasn’t true resilience. This past year, I wanted to embrace the forces around me instead, and let them loosen the soil of my toughness. To both survive them and let them shape me. Just like I wanted my rosemary to have the opportunity to flourish and occupy a bigger and bigger space, to spread its small, close leaves and belong.

Instead of wishing things would go back to the way they were, I began to love the small moments and simple routine of time spent with my family. To me, “making it through the pandemic” was no longer about staying strong and trying to hold on to how things were before; it was about actually embracing the challenges, changes, and growth it offered. Making it through the pandemic was showing my son that even though the playgrounds were closed, we had a beautiful world around us to explore. It was showing me that I could commit to something new and learn from it. It was fully enjoying the beauty of our daily bath, reading, and night-night ritual—and then stepping outside as the sun dipped below the houses across the street to water the rosemary and check on its progress. That smell alone seemed to indicate we would be all right.

After a year, the rosemary was still alive, even under the pressure of winter. It was amazing and gave me hope that come spring I’d see the telltale tender green shoots that signal health and growth.  Even if I didn’t, I was proud of trying, of channeling hope and embracing the possibility of failure. Like the rosemary, I had let myself embrace the elements I couldn’t control and would be forever shaped by them. 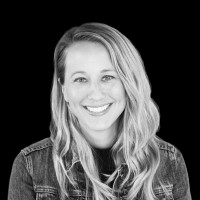 Kate is the Pacific Northwest general manager of Inkhouse. She resides in Seattle with her husband and two young children.