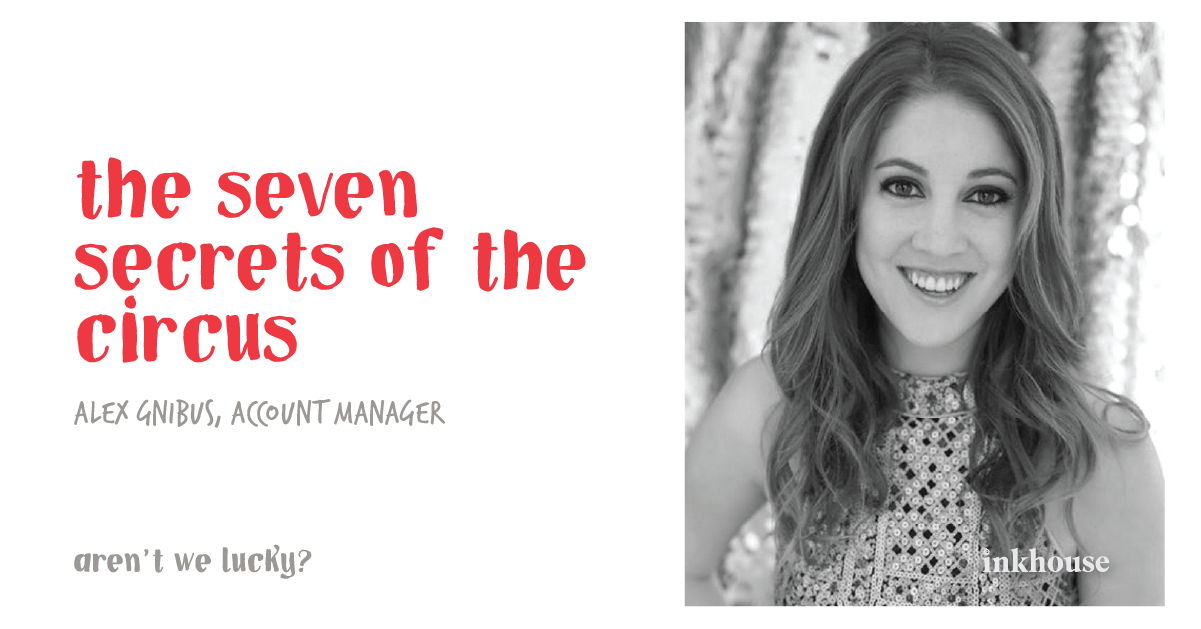 The Seven Secrets of the Circus: An Employee Essay From “Aren’t We Lucky?”

It started with the Beatles and the opening lyrics of “Because.” Aerialists were suspended on ropes, flinging themselves up and down to the beat as the music transitioned into “Get Back.” A duo caught each other on the trapeze to “Yesterday.” Lucy in the Sky with Diamonds wore a bedazzled leotard and bright white go-go boots as she sparkled and soared above the audience in a blur of glitter.

It was beautiful and brilliant and bizarre—and I shuffled out of the arena and back into the smoky Mirage feeling lost, and not just because Vegas casinos are not designed to help you find the exit. I was wondering why I had been in the audience and not up there on the stage. 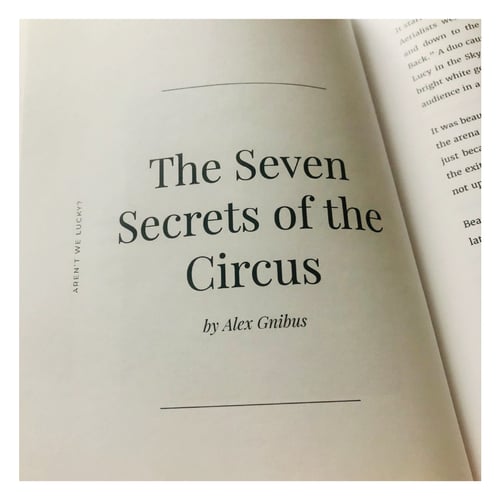 Secret #1 of the circus: It makes you feel things you haven’t felt in a while. It brings up memories that you weren’t expecting to remember again.

Physical performers dedicate every waking hour to their passion, but their days are numbered. The average retirement age for an NFL linebacker is thirty-five. Ballerinas often retire by age thirty. Olympic gymnasts retire in their late teens; Mary Lou Retton and Carly Patterson both at eighteen, Jordyn Wieber at nineteen. Then they undergo a “career transition,” which is industry lingo for having to stop doing the thing they love.

Martha Graham once said a dancer dies twice. “Once when they stop dancing, and this first death is the more painful.”

As a former competitive dancer, I died for the first time during my final performance in college. When the curtain fell, I didn’t cry. Instead, I sprinted backstage and puked in the dressing room. I didn’t take off my costume until the next morning. I wore it out to the bars that night, savoring every last second of feeling like I had something special to offer the world. You’re probably wondering why I couldn’t just keep dancing after college. I can. I do. But I want to be on a stage. After college, I researched ways to continue dancing in a performance capacity, not just recreationally. It’s not enough to dance like nobody’s watching; I’m less a dancer than I am an entertainer.

But there are no openings for a twenty-five-year-old who is a good dancer, even great, but not the best. (Trust me. I briefly considered the possibility of becoming a viral D-list celebrity with the specific end goal of competing on Dancing with the Stars). If professional dancers have a short career, my amateur career was even shorter. I started to resign myself to the fact that I would never perform again. The final curtain comes for everyone. And even the most phenomenally gifted, the champions, have a limit. So what are we all to do for the rest of our lives?

I spent the two years between college and the pandemic searching for a way to bring razzle-dazzle to the world without my tap shoes. I threw myself into work, tried different ways to exercise (struck out with Pilates), and had a blast bouncing around the bar scene, and for a while it was enough to enjoy a good craft beer or three and call it a day.

Then 2020 took away all of the things I had been leaning on. It was an extraordinary year that made us feel like we were constrained to be ordinary: Stay at home. Do nothing. How could we become anything spectacular if we were forced to lead a limited life?

Secret #2 of the circus: It sucks you in. You can’t put your finger on why, but something about it draws you toward it and makes you wonder. Maybe because the circus is one big dare.

A month into the pandemic, I felt a strange pull that hadn’t gone away since Cirque du Soleil. What if I tried the circus arts myself? I looked up a local circus studio that had stayed open with best practices for social distancing. Out of the apparatuses I had to pick from (rope, hoop, sling, trapeze), I decided to try aerial silks because I wanted to be like Lucy in the Sky with Diamonds, flying around on a piece of fabric. It looked flashy, and I like flashy.

But I could think of a million reasons not to try aerial silks. For starters, I wasn’t so sure I could pull off a leotard unironically as an adult. Second, I had the upper-body strength of a spaghetti noodle. I could do approximately one-tenth of a pull-up. I learned this depressing fact about a month into the pandemic, when I installed a pull-up bar for home workouts. Did you know Cirque du Soleil recruits former Olympic athletes?

Most importantly, the circus seemed like something only extraordinary people do. That’s the whole point of a circus, anyway: to demonstrate the impossible. To showcase the outliers. Circus performers are an anomaly, while you, the audience, are ordinary.

So, against everything that was telling me not to, I signed up for Level One Silks.

Secret #3 of the circus is a discouraging one: As hard as aerial looks, it’s even harder than it looks. The first thing I learned was how to actually climb up the silks, which shouldn’t have come as a surprise, except it did, because in my head I had envisioned that aerialists don’t climb up anything—they’re simply strapped into a harness or something and lifted up, right? Not the case! I almost quit after my first class.

There was also the inversion issue. The foundation of most advanced aerial tricks is inverting—getting upside down. It sounds straightforward, until you end up flailing around in the air because core strength is hard. Inverting is a notoriously difficult skill to acquire. And if you can’t invert, you can’t move on from the beginner tricks. But the more secrets of the circus I learned, the more I got hooked.

Secret #4 of the circus: Silk is a puzzle with infinite solutions. There are specific mechanics to wrapping and gripping the fabric, and multiple pathways to executing a trick. It’s not a show of brute strength but more often one of smarts—a sleight of hand, a clever dance with physics.

Secret #5 of the circus: Performers create an illusion of spontaneity for the audience. The shock value of the circus comes from the element of surprise, the perceived danger, and the uncertainty of a shaky tightrope. But in reality, every sequence is planned with military precision. Every performance has a predictable outcome. In other words, aerialists are marionettes that control their own strings.

I faced endless burpees, silk burns in all the weird spots, and an episode of cracked ribs (the burpees were more painful), but I had the resilience to go back to circus class again and again, because every class I stupefied myself with things that had seemed impossibly out of reach. I remember the first time I did the splits in the air. And then another day I did my first drop. The weeks got warmer. The instructor invited me to join the performance track and learn choreography. One class I found the stamina to make it through an entire four-minute routine in the air. The weeks grew colder. One day I discovered I could do an honest-to-God pull-up.

Secret #6 of the circus: Anyone belongs in the circus if they want to. We tell ourselves all day that we have no business doing something (and impostor syndrome feels particularly real when you’re dangling from a ceiling), but it’s a lie. No one says you can’t put on the leotard and swing around in the air like you’re Lucy in the Sky herself. No one says you can’t once again take the stage for your encore, even if it looks a little different from the last stage.

Even some of the professional performers in a circus are already on their second act. Remember how I said Cirque du Soleil hires former Olympians?

This brings us to Secret #7 of the circus: Many great circus performers were once something else.

On February 7, 2021, Tom Brady led the Buccaneers to a Super Bowl win at forty-three years old. I don’t normally get emotional watching the NFL, but I was moved seeing his gleeful face as he accepted the trophy. Because you can tell football means the universe to Tom Brady. And you can tell that he’s already thinking about his next Super Bowl title. Wondering when the last one will be. Inevitably the final game will come. But maybe he’ll find meaning in a new passion, just as Kobe Bryant won an Oscar because he knew excellence wasn’t limited to basketball.

Maybe he’ll have his own second act.

I went to silks class for the first half of the Super Bowl game. I climbed up the silks, tilted backward, and connected feet first with the fabric. Just like that, I was head over heels. For the first time, I inverted. It was almost exactly a year to the day since I’d seen Cirque du Soleil and felt that gravitational pull in the opposite direction, pulling me to the sky instead of the ground. A year since I’d made the decision to become something new while returning to the world of performing arts I thought I’d left behind.

There’s no shortage of ways we can amaze ourselves if we know where to look. But it never hurts to start by seeing the circus.

Alex is an account manager at Inkhouse. She’s also a dancer, a writer, a concertgoer, a craft beer lover, and as of 2020, an aerialist.