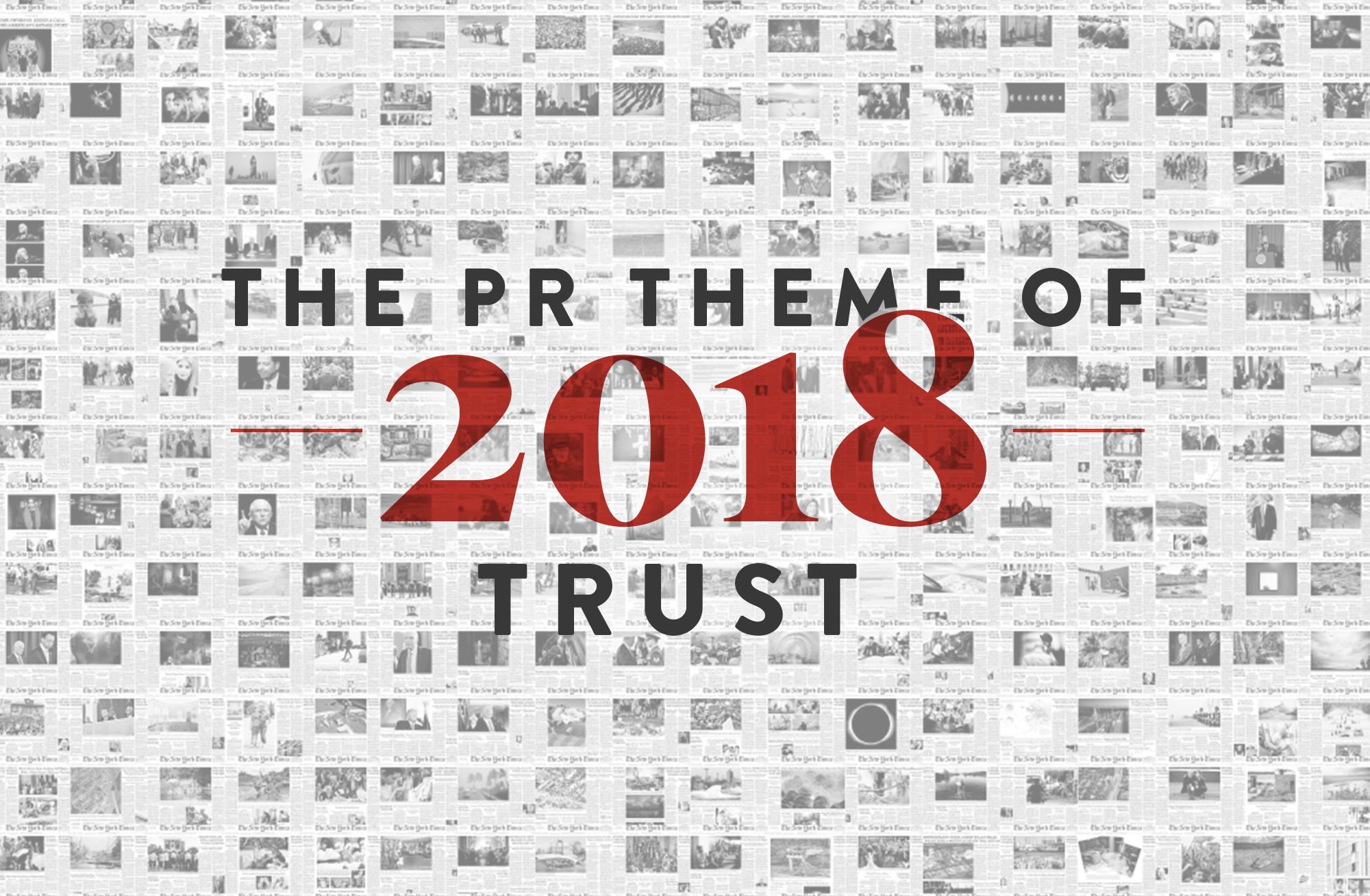 The PR theme of 2018 will be informed by the tumult of 2017, the year we unearthed all the dirt and eroded all the trust. Where to begin? While Facebook was testifying in Congressional hearings about how a company with Kremlin ties spent $100,000 in ads during the 2016 presidential campaign, the #MeToo campaign was raging in the wake of sexual harassment and abuse allegations against Harvey Weinstein and then, it seemed, almost every other white man in power.

Uber’s CEO Travis Kalanick was pushed out, VCs faced accusations ranging from putting their hands up female entrepreneurs’ skirts to sexual slavery (OK, that one was 2016, but still). It got so bad that some VCs signed a decency pledge. I wish I was making this stuff up. Meanwhile, Dove put out an ad that appeared to be blatantly racist and President Trump accused both sides of being at fault in the white supremacist march in Charlottesville.

Equifax experienced a massive data breach, Wells Fargo suffered a fake accounts scandal. United Airlines characterized what looked like an assault as a “re-accommodation” of the passenger. Sean Spicer asked the Washington Post for a correction because he said he was not huddling “in” but“among”the bushes before a press conference about the Comey firing. The Department of Education issued tweets with multiple misspellings, and the folks at the National Parks Service (supposedly) created their own social media handles so they could tell the truth, birthing the “alt-” social media movement.

Women marched. Immigrants marched. Scientists marched. I could go on for pages, but you get the idea. We have alternative facts to go along with our fake news. Did a shark really swim down the road in Houston after the hurricane? Did Hillary Clinton really run a child sex ring from a local Washington, D.C., pizza place during the 2016 campaign? No and no. Trust is uncertain.

Ev Williams, Twitter’s co-founder, said that tech firms will compete on trust. He’s right about tech, and it goes further than that. Trust is at stake for every single organization in America, which means it will have an impact on every single PR strategy for the coming year.

These will be the factors at play:

Businesses will take more stands. As InkHouse Chief Content Officer Tina Cassidy and I wrote earlier this year, businesses are the new battleground states. Customers, employees and investors are speaking with their values as well as their wallets. While they care about cool features and great customer service, they care more about what matters.

Crisis plans will get overhauls. Response times have shrunk from hours to minutes, and statements have gone from paragraphs to tweets. Truth matters. Authenticity matters. Words matter. And timing is everything. If you wait, you might not be in business much longer.

Data will be required to back up ideas. We’ve been enthusiastic about data storytelling for a long time, and it’s more important than ever. The marketing surveys that can be skewed will undergo more scrutiny as reporters and customers favor the certainty of real data about real customers.

The sales funnel is collapsing. Decisions to buy or to hate are made in seconds, in one click, especially for consumer products. Business-to-business companies still have time to work on the sales funnel to move their customers from awareness to interest, engagement and finally purchase. But those attention spans are waning. We have too many things to scroll through on Facebook and Instagram and, oh look, President Trump is tweeting again. Marketers will need to make a connection, make it fast and make the decision to purchase as mindless as a click.

Validation will come from affiliation and authenticity, not dollars. On social media, we’ve long known that audiences cannot be built organically anymore. The algorithms have prevented it in favor of the ads that produce revenue. This doesn’t mean we should throw earnest and honest strategies out the window. It means that we should find like-minded people and organizations and support one another by sharing content. We should use paid strategies with integrity to amplify honest content with real data, not to trick people into clicking.

PR people have always had a responsibility to tell the truth. We’ve gotten bad reputations as spin doctors and shills, but those strategies never worked in the first place and they sure won’t work in the future. Good PR strategies must be based on real data, real stories and authentic points of view. They have to matter to the real people each organization contains within its orbit. It will be about connection, not convincing. It will be about truth, not alternative facts. It will be about what’s real, not what we imagine might be real in the future.

This piece was originally published as part of our membership with the Forbes Agency Council.