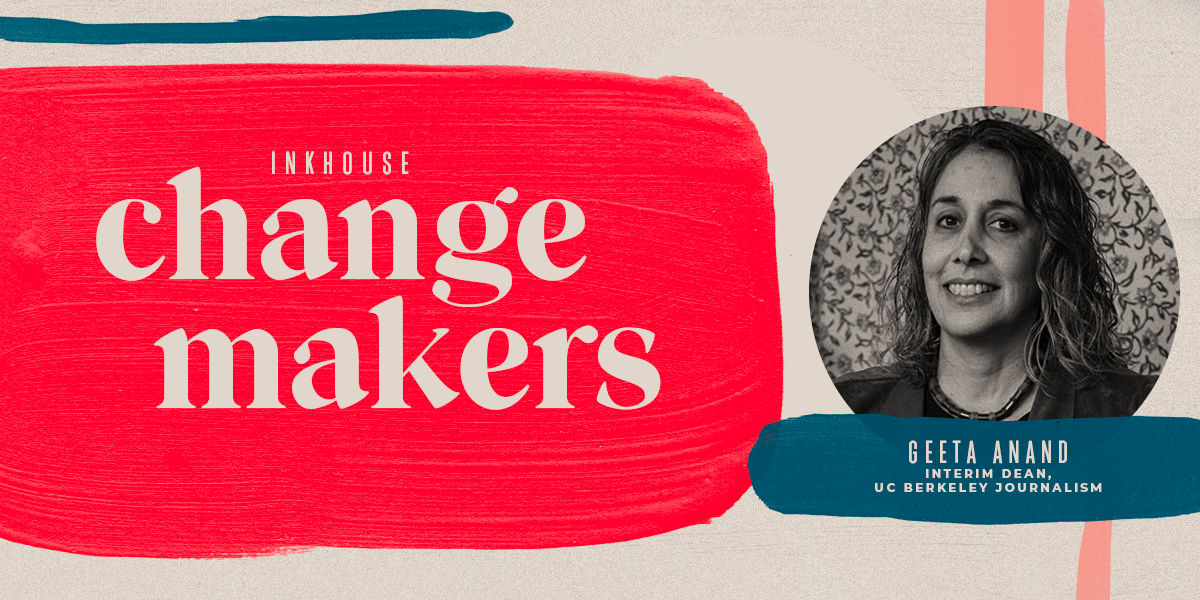 Geeta Anand was recently named interim dean of UC Berkeley’s Journalism school. She won the Pulitzer Prize in 2002 for her stories on corporate corruption for the Wall Street Journal. She’s the author of a nonfiction book about a father’s fight to save his kids by starting a biotech company to make a medicine for their untreatable illness, which was made into the Harrison Ford movie Extraordinary Measures in 2010. Anand has a 27-year career as a journalist, most recently as a foreign correspondent for The New York Times and the Wall Street Journal in India. Below is our Q&A.

Not only are you the first woman of color to hold this role at Berkeley, but the first woman. You were raised in Mumbai, and you have spoken about this feeling of being seen as an outsider but not feeling like one. How is your identity framing your new role?

Anand: The role of being an insider and outsider is the role of a journalist. It’s a place where you can have a voice and you don't have to be from there. It also helps me understand what our students and protesters are talking about when they talk about systemic racism. Just because I made it doesn’t mean everyone can. I was an exception as an outsider. And I have also experienced racism so I deeply understand the issue. Because I've been a journalist in predominantly white male environments and in the mainstream media for so long, I also understand what needs to change.

How has COVID-19 and the current political climate changed what you’re teaching future journalists?

Anand: We’re adapting to the digital environment and also to the new cyber tools and open source investigation techniques. In the time of Covid it’s more necessary when you can't run out to see something or wait outside a courthouse to interview people. You need to find them on Twitter or other social media. And you also need to protect yourself in these times, so cybersecurity is really key.

We’ve seen an increase in focus on local reporting. Are you seeing that as a source of future journalism jobs?

Anand: I'm passionate about local reporting. That's how I learned. I'm hoping that at Berkeley, we can invest in local journalism around us. One of the university’s main pillars is community service. And I think this could be a model that helps local journalism, especially if every university invested in the community newspapers around it and saw that as a public service to its communities. So the students are serving an important role in the service of democracy and then they're also learning to write.

How do you guide students to stand up for truth and facts, while being unbiased in the age of “fake news”?

Anand: “Unbiased” actually means searching for the truth. You can get confused into thinking that being unbiased means not saying what the truth is, and giving an untruthful person equal weight in a story. Being unbiased doesn’t mean you don’t have an opinion. It means you approach your story looking for the truth. It means going to the other side, because you want to lift up every rock and look under it. Once you understand that, then it becomes easier to not give equal space to the murderer, or the liar. It means that you need to show that you've spoken to the murderer or the liar. We don’t want readers confused about what really happened.

What is at stake for the news media in terms of diversifying its reporting teams and its sources?

Anand: We are gaining a much deeper appreciation for how much your point of view and your experience affects what you see and what you think. Most of us are deeply influenced and entrenched in the experiences of our lives. And that affects so much of just how we see something. We need to be intentional in seeking out different voices. It means taking a risk, because you're engaging with people you don't know. And so you have to make a leap and trust. If you don’t, you’re losing that point of view and that’s a high cost in journalism.

What has been the most effective catalyst for change in your experience?

Anand: Young people pushing for change with great passion. Often it's student activism, which can start around a small change that's about to happen. They see that possibility and they push for more.

What do you think is the biggest impediment to change?

Anand: Defensiveness, and ego. We have to be less defensive. The fact that people are questioning something doesn't mean they're questioning us and or that we've done a bad job.