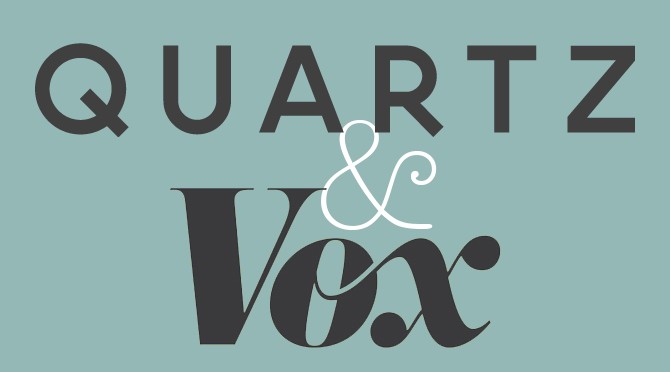 For all the handwringing about the state of the news business, there is a ton going on that is really exciting. Yes, it's taken a while for the industry to get its sea legs (a process that isn't going to stop any time soon) but there are plenty of interesting things happening. Two outlets that I have been relying on more and more are Quartz and Vox. They take very different approaches to presenting information.

Vox attempts to make complex issues digestible with plenty of charts and graphs and bite-sized data served in the form of "cards" that address specific questions related to a topic. It's a nice approach. Vox makes it easy to share its stories and cards through the various social channels. What Vox doesn't allow you to do is ask questions or post questions. The site presents itself as helping readers understand the news, but without the ability for readers to engage that understanding is limited to what the editors believe it should be.

This morning as I read "The Crisis in Nigeria, in 11 Maps and Charts" I had questions. Three of the 11 charts and maps confused me. One illustrates how Boco Haram attacks occur primarily in northeast Nigeria. That map was pretty straightforward. Subsequent charts went on to explain some of the facts behind the story, including the concentration of wealth, vaccination rates and female literacy in the different states.

What struck me was that the factors deemed to be behind the rise of Boco Haram seemed to be worse in the northwest of the country, where there are relatively fewer attacks. Why? The is no exploration beyond the charts and graphs, which, one presumes, are meant to speak for themselves. The information opens itself to dialog but Vox keeps that door closed. It offers an interpretation of the news but doesn't allow readers to engage. That's disappointing.

I still value Vox though and think they do a good job of distilling information. I just wish they'd allow readers to get into the mix.

On the other side of the coin is Quartz. Quartz takes a more traditional approach to reporting with text-centric stories by reporters and editors who are writing from areas of interest. This is a good thing. There are news briefs but for the most part these are mid-form stories. Stories frequently reflect the author's perspective on the news. Comparing Quartz coverage of Boco Haram with that of Vox illustrates this point.

That chaos is fanned and fomented, argues Edozian, by Boco Haram, which is able to take advantage of Jonathan's weakness to advance their own ends. To the initial list of problems with the Jonathan administration Edozian adds the incredibly inept response to the case of the kidnapped schoolgirls. He makes a compelling case and links out to stories that support his points. It's a solid and persuasive story.

It's also a story (as are all on Quartz) that invites reader participation. Quartz allows readers to annotate every paragraph in a story. One can add questions or comments and engage with other readers as well. This isn't a new idea but Quartz is among the first mainstream news sites to take this approach.

Making it available and having people take advantage of it are two different things and so far I've not seen any reader annotations. Just as the news industry is getting used to experimenting with different models and formats, so too are readers. There are interesting things being done in the area of online annotation and with time more people will take advantage of it.

User adoption aside, Quartz is making room for readers to share their perspectives and that is a welcome development. Vox, by contrast, is working hard to distill and interpret and explain events to make the news clearer. Both approaches have their merits. My hope is that the Quartz annotation model will be adopted by more outlets, and that more outlets will also attempt to break down the news into more easily understood formats. Marrying the two approaches would be an exciting step for how people consume and engage with information that matters.