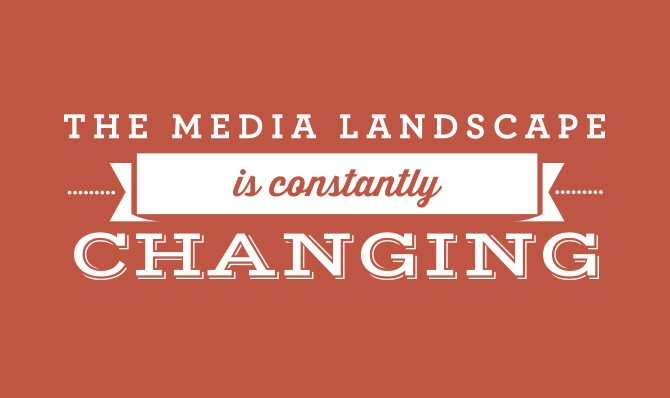 Last year was one of change for the media and for PR. Digital media kept growing like crazy and everything else kept shrinking. Mobile was a big part of that growth, which accounts for a little more than 20 percent of our media consumption, but by 2030 the estimate is that it will be more than 50 percent. It’s noteworthy in the news business that 39 of the top 50 digital news sites receive more traffic from mobile than desktop.

The growth of mobile and digital have also driven subscriptions for new media, primarily video and music streaming. Netflix has about 70 million subscribers, which beats HBO’s 32 million, and Spotify had its eyes on 100 million users by the end of 2015. Print media subscriptions are still floundering, but the venerable New York Times has seen revenue climb above $100 million for its digital subscriptions. What do these subscription trends have in common? Quality content.

The changing media business model is also the thing that keeps driving change in PR. The decline in subscriptions opened up opportunities for contributor networks where experts provide content for free (think Huffington Post). Now let’s talk ads. The proliferation of ad blockers that get rid of those annoying banners and pop-ups is forcing change again. Publishers can’t afford to offer free access if it’s not supported by ads, so now we have native ads. What are those you ask? They are advertisements that look like and blend in with the regular content that surrounds them (most often in the form of articles). Native ads are generating big bucks for publishers and big opportunities for marketers: advertisers spent $10.7 billion in 2015 on natives, up from $7.9 billion in 2014. The FTC just announced new rules to make native ads more transparent – truth in advertising – but they are probably here to stay.

What’s a good PR person to do with all of this change?

1. Place Your Content in the “Stream.” The mobile explosion means that your content’s not going to find too many dates hanging out on your website all alone. It needs to get out there into the stream where people find their news, say Facebook (it reaches more people than free TV) or Twitter. But the stream is wider than that. LinkedIn Publisher’s 1 million contributors are finding big audiences there (read more tips from LinkedIn’s Caroline Fairchild). While you’re at it, put the content up on Medium, too, and get your blog on Apple News (submit here). Let’s not forget the email newsletter. Yes, I said email newsletter. They’re back (even Lena Dunham agrees) and they work.

2. Know When More is Less. I’m talking about quality over quantity. Remember headlines like this, “Someone Left a Dog Outside During a Rain Storm...Then This Happened”? They don’t really work anymore. People got smart, or we’ve reached the saturation point. It doesn’t matter. Consumers are holding content to a higher standard because there’s so much of it we just can’t take it all in. Sure, you might get clicks with a great headline, but if the content stinks after that, no reader is going to stay and they surely won’t come back. First impressions matter.

3. Make Your Graphics Move. It’s time to retire the infographic. Sure, we’ll still create some and they’ll still work for specific scenarios, but we’re seeing visuals take a turn for the interesting. Interactive data visualization and even cinemagraphs (we made these during our holiday party) and gifs are helping content find its audience. In fact, as Nick Bilton pointed out, gifs are becoming the new political sound bite.

A GIF is worth 1,000 tweets. How political GIFs are the new soundbite on the campaign trail: https://t.co/f83V2FBFMo pic.twitter.com/Br5r2drlEU

4. Measure Something That Matters. There is so much to measure – clicks, engagements, sentiment, share of voice, retweets, likes, shares, comments. It’s hard to know what to think about all of these numbers. What are we really trying to achieve  with PR? Well, we’re usually trying to do drive sales. So first we need leads, and to get leads we need to broaden awareness so we should be measuring reach. Then we need credibility. It’s one thing to say something on your blog. It’s another to have the Wall Street Journal quote you saying the same thing so we need quality media coverage. Finally, we need the products of PR to be useful. If you can’t reuse the content for sales or your newsletter or a webinar or you name it, there’s no point in its existence. Great content and media coverage leads to the other things, namely interest and engagement; that’s what moves leads down the proverbial marketing funnel. The big question we should be asking is this: is PR helping you meet your business goals?

5. Don’t Mistake Your Product for Your Story. Very often, the goal of PR and marketing is to sell more products and services. But if I walked into a party and handed you a marketing brochure on InkHouse’s services you’d think I was nuts, and I would be. In the digital world consumers still behave like human beings who need to become interested before they become engaged. As marketers, we need to lead with how we think or we’ll never get to tell anyone what we do (unless you’re ubiquitous like Apple in which case you can get right to the next iPhone – everyone’s already paying attention).

6. Watch for New Distribution Channels. We’ve got our eyes on messaging apps like WhatsApp (900 million users and owned by Facebook) and Facebook Messenger (800 million users, but probably more by now since recent data isn’t available). Almost 50 percent of 19 to 29 year olds use them. Facebook Messenger is now integrated with Uber, and just launched an SDK (software developer kit) so developers can build things like shopping, travel and other interactive experiences into Messenger. Wow! And by the way, you can also use those visuals (from tip #3 above) that pop within Messenger. It’s part of being in the stream and we’re all going to need to figure out how to be there.