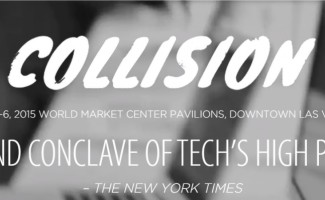 What's Next in Tech, According to Collision

That’s a wrap, kids! Collision 2016 concluded its three-day spectacle of emerging tech (with a healthy dose of sports and music) yesterday in New Orleans. As always, it was an energetic few days dedicated to helping start-ups get off the ground. Established players like Slack CTO Cal Henderson took the stage to discuss how, exactly, one scales so quickly, while the convention center floor hosted some 600 start-ups, many of which had yet to launch.

So what did we learn about where tech is heading? Insights below

1. The future is here - and it's name is VR - Virtual reality was all over Collision, from the exhibitors, which included companies like NY-based YouVisit. The conference included no fewer than nine panels touching on aspects of VR, with a particular emphasis on how the medium can be used to engage sports fans and viewers of TV and movies. But it wasn't all fun and games - a standout panel included researchers from Johns Hopkins University sharing how they've used VR technology to engage people with severe paralysis.

2. Uber for X is dead, but start-ups don't know it yet - There has been an unending buzz in the tech community over the last few months about the impending demise of "Uber for X" companies. The New York Times' Farhad Manjoo wrote a much-discussed column on the topic earlier this year, and Micha Kaufman, the CEO of Fiverr (and an InkHouse client), wrote about coming consolidation for Uber business model copy cats on Re/Code in January. It's unfortunate, then, that today's early stage start-ups don't know it. Many of Collision's Alphas and Betas described themselves as "Uber for X." The dominant marketing lingo has not, unfortunately, kept pace with the times.

3. Vice squads are in - One very real way Collision start-ups looked to the future? Drugs! Specifically marijuana. Legalized pot is going to be big business, and the savviest minds in tech are recognizing it. But it wasn't just about pot. Collision had a significant number of exhibiting start-ups for wine, beer and vape-lovers.

4. Bias is so out - Collision has a lot of panels. It's impossible to see them all and harder for one to really stand out. But somehow, VC Chris Sacca and Haper Reed, current PayPal-er and former CTO for Obama for America, did just that. But don't be fooled by the title of their talk "The Rise of the Buy Button." Beers in hand, Sacca and Reed decided to jilt the script and focus on tech's most pressing issue: diversity. Sacca and Reed both shared ways they found unconscious bias slipping into their work and what they're doing to be more vigilant about it. They're on a mission to diversify tech by "talking about it" (even if it's uncomfortable) and, in Sacca's words "getting f-ing paid." The more VCs understand that there's money to be made by investing in different kinds of companies, the faster we'll see meaningful change. Money, as they say, talks.

So tell us - what did you love most about Collision? The jazz? The rain? The line at Bochon Butcher? We want to know! Tweet at @InkhousePR and @anne_baker.