Wilderness Camp: An Employee Essay From “Aren’t We Lucky?”

I was an angel as a child. I didn’t have any siblings, so I spent most of my time entertaining myself with American Girl dolls or driving around with my dad in his old red truck, listening to Bob Marley or the Grateful Dead. All my teachers loved me, and I was petrified when I saw the word “shit” scratched into the wooden play structure at my elementary school playground. In middle school, I played the piano and the harp, even performing at the local food co-op in Bozeman, Montana. I also did outdoor weddings and hospital lobbies. I sold Girl Scout cookies door to door. My biggest concern was the role I would be cast in for the Montana Ballet Company’s annual production of The Nutcracker.

When I hit high school, however, my confidence shattered and my life of overachievement and morality began to slip away. My crystal-clear skin started breaking out, despite how frequently I washed my face or used special products. My attempts to return my skin to its prepubescent state only accelerated the breakouts. I became moody and secluded and withdrew from the things and friendships I cherished.

I had always been a straight-A student, but I started skipping classes and wearing heavy makeup to hide from the world. I fell for a manipulative classmate who took advantage of my insecurities and introduced me to the darker side of high school: drinking, sex, and sneaking out after curfew. When questioned about my behavior, I repeatedly told my parents, teachers, and advisors that I was struggling with negative self-image and depression. Still, the consensus was that I was dramatic and overly obsessed with superficial things like appearance, influenced, no doubt, by my love of the performing arts.

My mother wasn’t able to acknowledge my feelings, and that created a chasm between us. My dermatologist didn’t take my distress seriously either; she just gave me topicals and antibiotics and told me I would grow out of it.

One day during my freshman year, I came home and my mom told me that I was going away just for the weekend to a group therapy session with girls my age who were going through similar problems. I was excited for the chance to be with people who would understand. I didn’t like who I had become, but I felt detached from my own volition to make things better.

When we got to the building, my mom burst into tears and my dad was nowhere to be seen. “Don’t cry, Mom! It’s just a weekend,” I said. But the next time I saw my parents was two months later.

The staff took the overnight bag I brought; strip-searched me; and told me to change into an army-green wool sweater, weatherproof pants, and dirty brown boots. A man and woman blindfolded me and escorted me into the backseat of a vehicle. They told me that the purpose of the blindfold was to prevent me from knowing which mountain range we were in. If I hadn’t been terrified, I could have told them that I am directionally challenged and that there was no chance of my getting my bearings, regardless of the blindfold. After an unknown amount of time, the car stopped and they let me out and took off my blindfold. I was at a tepee that they called Base Camp.

I’m twenty-eight years old now and have blocked out many of the events of the following seven weeks, but the feelings of that first night with strangers will remain with me forever. The people explained that my parents had signed me up for a wilderness therapy camp for troubled teens, called Three Rivers Montana. They said I was lucky—other kids were taken from their beds in the middle of the night and flown to Montana from other states or countries; at least I lived there already. I didn’t feel lucky.

I put up the best fight I could muster. I told them there must be a mistake, because I was a good kid and my parents wouldn’t do this to me. I don’t remember falling asleep, but I remember waking the next morning to pitch blackness. I flung out my arms and legs and felt the soft fabric of a sleeping bag but couldn’t find the hole for my head. I screamed, and someone unzipped me, telling me that it had been so cold the previous night that they had zipped me completely into the sleeping bag so I wouldn’t freeze.

That day, a letter arrived from my mom, saying, in essence, “Sorry, but we didn’t know how else to help you.”

After about a week, I accepted that the only way out of the program was through the other side. They told me that I could keep my stint to seven weeks by cooperating with staff and participating in camp activities. So I hiked—between two and twelve miles per day—in bitterly cold winter conditions. I slept in a sleeping bag on the ground under a tarp and woke to snow dripping off the trees onto my face. I did jumping jacks in the morning; ate astronaut food out of a canvas sack; used an ax to hack into the frozen river for water, which I purified with iodine drops; solo-camped among the wolves; struggled to start a fire with nothing by a wooden bow and sagebrush; and fantasized with my fellow campers about normal life. We wanted to eat food that wasn’t dehydrated and powdered. We wanted to escape in our socks and run back to the friends and lives we’d left behind. Mostly, we just wanted to shower.

Despite all this, I learned survival skills, overcame obstacles with sheer grit, and softened toward the camp leaders. I quoted movie lines with the other campers while hiking and celebrated a holiday in a yurt. I came to love the feeling of standing over a campfire after a long hike (if one of us was skilled enough to start a fire with no matches). Toward the end of the program, I could tell the time by the sun’s position and was acutely aware of the changing of the seasons. I lived harmoniously with wild animals and was so caked in dirt that my skin color darkened a few shades, but I stopped caring.

In these ways, Three Rivers succeeded in changing me forever. But what fascinates me most is that the true healing, and the birth of the real warrior inside me, occurred in the ten years since “graduating” from wilderness camp. 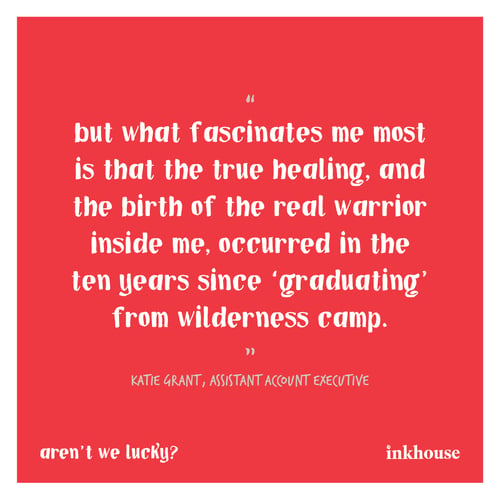 The camp strongly recommended that parents “re-enter” their children in a different school and community than we had come from, to keep us from falling back into old patterns. The day after I was free, my parents put me on a plane to Massachusetts to live with my aunt and uncle. I started a new high school with new kids, where not only did my troubles persist, but I also began dealing with a new layer of anxiety: PTSD. The sight of a campfire or forest or box of matches triggered a flood of memories. I was angry at my fellow students when they complained about carrying heavy backpacks; I believed that the experiences I was carrying within me from my past were heavier.

I tried to get my new friends to listen to my stories—I had so much to get off my chest. But, to my surprise, they all seemed to envy what I had been through. They would say things like, “Oh, cool! I wish I could be out of school for two months!” or even, “Wow, I love hiking and camping. That sounds like a blast!” They didn’t and couldn’t possibly relate to my trauma, and it left me bitter and frustrated. Since it turned out that my mom’s therapist had recommended the camp to her, I was too paranoid to talk to a therapist of my own. I slowly realized that overcoming my Three Rivers trauma and getting to the root of the insecurities that led me there was not going to happen overnight. It was also going to have to come from me. No one else was going to relate, validate me, or heal my wounds.

I decided to take back control of my life, and I made a series of decisions that changed its course. First, I dropped out of high school. Living in the woods makeup-free had not magically resolved my skin condition, and my anxiety about it was worse than ever. When I made this decision, I was only seventeen years old. The disappointment from others was tangible, and I could hear the whispers everywhere I went: How is she going to get a job? Such a waste of potential. But I knew in my heart that I had to take matters into my own hands.

I researched the best dermatologist on the south coast of Massachusetts, then walked in and demanded the most aggressive acne treatment on the market. She looked at my skin and prescribed me the drug without hesitation, despite the scary side-effect warnings. The months that I was on Accutane were some of the roughest times I’ve had; the side effects—skin peeling off in layers, constantly chapped lips, nose bleeds, joint pain, dizziness—were unforgiving. But, like magic, my skin slowly started to clear, and eventually I was able to drop my foundation routine. The first time I ran errands with no makeup, I felt renewed and comfortable in my skin. I knew I was going to make it.

My relationship with my mom has by far been the biggest uphill battle—I have forgiven her for most things, but I’ve forgotten nothing. We still haven’t had an open conversation about Three Rivers because, more than a decade later, the emotions are still too raw and the flashbacks too painful. As I mature, I can relate to the fear she must have felt as a parent and appreciate her perspective, but I simultaneously wish that she had been able to do the same and step up for me at a time in my life when I needed her most.

At least today I’ve made it to a place where when people invite me to go camping, I always say yes. 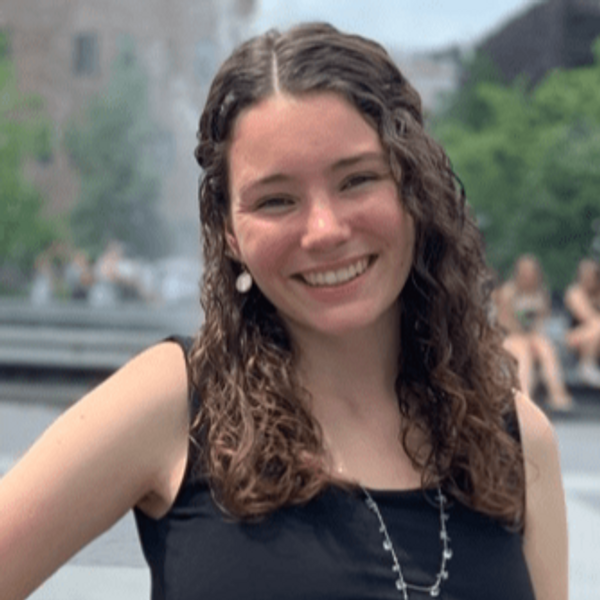 Katie is an assistant account executive at Inkhouse’s Waltham office. She has west coast roots but an east coast soul. She can be bribed into doing almost anything with the promise of iced coffee and never, ever, misses a Green Bay Packers football game.