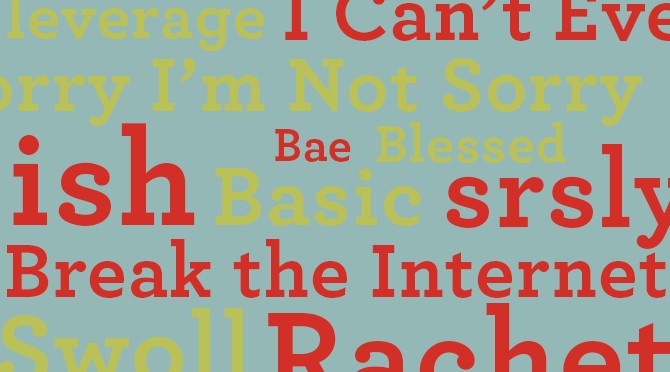 Words to Retire in 2015: The Millennial Edition

According to the Oxford Dictionaries, the 2014 word of the year is vape.  This was a surprise to me as it’s not a word I’ve seen much over here in the States, but in Great Britain, it’s most definitely a thing.

British/American linguistic differences aside (of which I am a polished connoisseur), when polling my peers, friends, reporters, and social followers for this year’s post, I noticed I barely knew many of the words they wanted retired next year. This collection of mysterious words reminded me that millennial speak and 40-something speak are, well, generations apart.

Their crimes? These words and expressions are shallow, overused on social networks (often preceded by a hashtag) and have the potential to be here-today-gone-tomorrow. It’s no coincidence that several of these terms also appeared in TIME Magazine’s poll of words to ban in 2015 (note that the publication received much whiplash for its suggestion that the word feminist needed banning.)

So without further ado, here are the ten words that a sampling of in-the-know millennials would like to see retired in 2015:

In the worlds of PR and content marketing, it’s unlikely that we’ll find much need for “bae” or “ratchet” in press releases, contributed posts or infographics. Phew. But the world of business speak is not without its offenders – words that have been overused or become so generic that they lose their punch. Here are the ones that I’m voting off the island:

As we close out 2014, a new expression was recently brought to my attention: on fleek. If you’re not sure whether you are on fleek, BuzzFeed offers this handy quiz. Savvy brands have already caught on. But watch this space, folks, I’ve a feeling that on fleek is already a strong contender for next year’s list of words to retire. Check back here, December 2015.