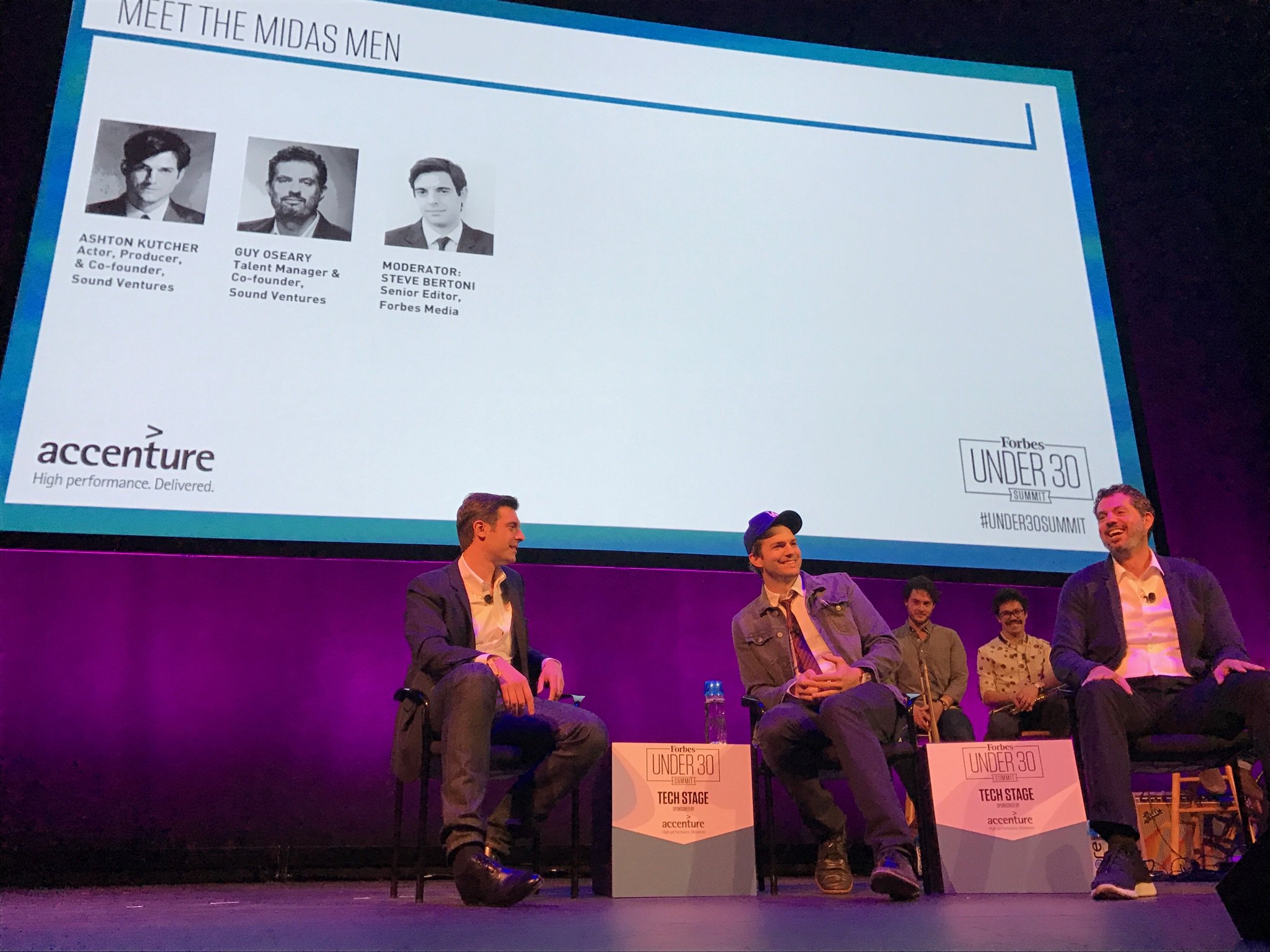 Business and Life Lessons from Ashton Kutcher and Guy Oseary

Boston was buzzing with the Forbes 30 Under 30 Summit taking over the City for two session-packed days of life and business lessons for entrepreneurs and innovators. It was an exciting event for Boston to host, given the number of brilliant young minds attending college and post-grad in our fair city. The energy and enthusiasm was evident throughout the days, and it was clear that hosting an event of this caliber certainly only helps Boston’s plans for attracting future business and development. My colleague Kari Hulley and I were lucky enough to attend the Tech track of the conference, held at Emerson, where we were inspired by some of the brightest minds in tech, business and journalism.

The opening session of the Tech track was a big draw with Ashton Kutcher and Guy Oseary, his business partner at the VC firm A-Grade Investments, headlining the event and Forbes’ Senior Editor, Steven Bertoni moderating their panel. Turns out Ashton and Guy know a little bit about tech success having been early investors in Airbnb, Spotify, Pinterest and Uber, to name a few. Since it isn’t every day you get to go to work and listen to a celebrity, and a celebrity manager (and business partner to some little known acts like U2 and Madonna) give business advice, I thought I would summarize it here for those that missed out.

So what can we learn about business, investing and innovation from Ashton Kutcher and Guy Oseary? Surprisingly -- or not so surprisingly for those that have followed the story of how they turned a $30 million portfolio into $250 million -- quite a lot.

Ashton‘s advice was more business than comedy. Both he and Guy had great insight for entrepreneurs looking to gain attention from VCs and for VCs looking to invest in the next big thing.

This is an easy thing to do but something people seem to have gotten away from in business and more particularly in investing, according to Ashton. If you are going to invest in the person and their product then care enough about it to show up and be present in your meetings and make sure you actually take the time to use the product. If it’s an app, install it on your phone; if it’s a service like Airbnb, try it out (Ashton used it everywhere he went during his early investment in the company). It’s not rocket science but sometimes just showing up and giving a damn can make all the difference. If you are going to make an investment, make it personal.

2. Small touches can make big waves when growing a business.

Ashton talked about leveraging the power of a network to make the right connections. While not all of us will be fortunate enough to work with venture capitalists like Ashton, we all have a few dozen connections or more to tap into on LinkedIn or other business communities. If you need help finding new talent, or securing an office space, put some feelers out to your connections. If you have mentor that is in your space and willing to help you, send a note and at the end of the note always include an “ask” of three things they can do to help you build your business. They are more likely to remember it and act on it if you spell it out.

3. There is no substitution for hard work -- grind generously not selfishly.

It is fairly common to see an entrepreneur give up the 40 hour work week, only to work double that when working for themselves. While there is no substitution for grinding out the work, founders should not only put their blood, sweat and tears into their own businesses, they should spend some of that time working with a non-profit that matters to them. These efforts will prove fulfilling outside of their own business focus and create a new avenue for networking with powerful people you would not have normally had access to.

4. Make sure you are an original.

Guy Oseary added this valuable nugget to the conversation. He said that to be successful you have to be yourself and make sure you are original. Can you be the evangelist for your company? Can you be passionate and convince those around you with a message that makes others want to believe in you and your company? He used the example of Airbnb, and said the first time he heard talk about the company and how unique it was, it was like hearing Nirvana for the first time. He knew this was a business he wanted to be invested in and said he would have put everything he had to invest into that company if they had let him.

One thing Donald Trump has demonstrated during the election, according to Ashton, is if you can excite a consumer base that hasn’t been incited before with a new idea, then there is potential. In other words, if you identify where the gaping holes are in a marketplace, where the opportunity is ripe for growth, or you can create a competition that didn’t exist before, then you will be successful. Can you say Uber...?

Stay tuned for other InkHouse takeaways from the amazing and inspiring leaders at the Forbes 30 Under 30 Summit coming soon.