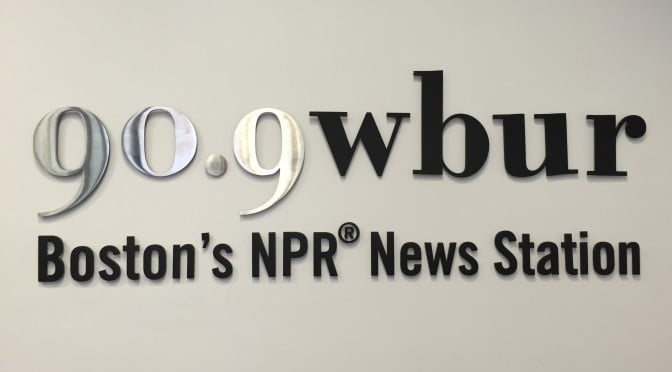 The day I decided I wanted to meet Meghna Chakrabarti, co-host of WBUR’s Radio Boston, I was driving home while we awaited the Tsarnaev verdict. Meghna was interviewing Tina Packer, author of “Women of Will,” a new book about the women in Shakespeare. Near the end of the piece, Tina was describing how Shakespeare found a way to communicate the complex range of human experience through his female characters.

She said of emotion, “…Unless you can get out of linear revenge thinking, unless you can actually shift this idea of an eye for an eye and a tooth for a tooth, but you really can shift it and say I will not be the same as the person who perpetrated these horrors on me. And that means creative thinking and love.”

Tina paused a bit here (around 12:10 on the audio). I was sitting in my car at a red light in front of Whole Foods and all of the sudden I was paying close attention as Meghna asked, “Tina Packer, if I may say, you caught me off guard just now. You have some profound feelings about this…Why the tears?” To this Tina responded, “I was just thinking of the trial that’s going on in Boston right now and how it’s about revenge – what they did is about revenge and what we’re about to do is revenge – and how do we get out of it?”

As my own tears flowed and I moved through the light that had turned green without me noticing, I kept wondering why Meghna decided to ask Tina that all-important question that got to the heart – the complexity – of the issue on everyone’s minds even though it was disconnected from the story. I wanted to learn more about how Meghna brings out the complex emotions that transform news stories into human stories, so I asked her to meet up. And she graciously agreed. What follows is an edited version of our conversation.

InkHouse: What made you ask Tina Packer about what choked her up?

Meghna: Tina was in the studio and I could see that she was feeling something deeply emotional. She took a deep breath and looked up as she was trying to speak. And I thought, I’m going to go for it because something is happening. So I asked why the tears.

InkHouse: Yes, but not everyone is capable of leaning into something like that in the moment. How do you make yourself present enough to get to the good story?

Meghna: We try to get as many interviewees into the studio as possible.

Nothing replaces being in the same space as the person. Then it’s about focused listening. It’s about paying attention. An interview is only as good as the effort and energy that the interviewer puts into actually listening.

InkHouse: During times like this, how do you make a judgment call about when to throw out all of the prepared questions and go with the moment?

Meghna: The studio is very busy. Every host has two screens and lots of papers. On one screen I have Twitter going and on another my internal scripting system. When we’re taking phone calls there is another screen with the incoming calls. In other words, there is a lot of visual distraction, along with the production staff talking in your ear. It’s the worst possible environment for paying attention.

Of the conversations that have really mattered, I stopped looking at the other stuff. The key for the true professionals and masters in the craft is to prepare, prepare, prepare. You must organize your questions and do the background research. Then you put it in your brain and you have to find the confidence that it will be in your soul and your mind so you can put all of the paper down.

InkHouse: How do you center yourself enough to get into that place in the middle of so many distractions?

Meghna: I’m a big believer in mindfulness and walking. I get out of the office I take a coffee walk at 10 a.m. and around 2 p.m. for 10 minutes on most days. Just the physical engagement of my body moving and walking is clearing.

InkHouse: How do you find the stories you want to air?

Meghna: We have a multi-pronged mission so if something’s in the news we have to cover it, but it’s also about people, ideas and conversation. On the people front, we look for those with the unique ideas. The person might have one tiny quote in a Boston Globe story and we’ll call them and see if they have other interesting things to say. Books are also a major driver. Also with more frequency, it’s that I was somewhere and met someone and asked them to come on. You need to be part of your community.

InkHouse: How do you manage to dig through the chaos of social media?

Meghna: As technology becomes a force, it becomes the journalist’s job to think like a detective and researcher. It’s content curation: applying editorial standards to cut through the noise. The answer to these issues is still old-fashioned journalism. You get on the phone. Google does not have everything. Technology is just the tool.

Meghna: We’re seeing the merging of value between two different poles. There are two types of news for us. On one hand, there is breaking news like the Supreme Court legalizing gay marriage. On the other is timeless content: that’s the Tina Packer conversation.

The grab for attention from the BuzzFeeds of the world does have an impact. We’re in competition for people’s attention. First, how do we grab it and then how do we hold it? BuzzFeed does a good job at grabbing it. The gold standard will be for those who can grab it and hold it. On the grabbing part, we’ve had to rethink headlines and lead-ins in a very beneficial way. Technology is really helping us now though. Radio has always had a metrics problem and for the first time we can measure when people leave a program.

However, there are story-telling tenets that hold. Once you grab people with a BuzzFeed-like list, a great story, powerful narrative, or tough, courageous, and insightful interview will hold people. That’s always been true, and it remains true today.

InkHouse: What was the most difficult or interesting story you’ve told recently?

Meghna: I’ll give you two.

1. Before the Tsanaev jury chose the death penalty we talked to a juror from the Timothy McVey trial (he was on trial for the attack that killed 168 people, including 19 children). McVey’s was the last federal jury to give the death penalty until now. We looked back at the history of how the government’s approach to terrorism trials has changed. It was difficult because I wanted him to tell us what it was like sitting on that jury. I wanted to know what questions he asked himself and what went through his mind when he considered this ultimate punishment that he had to choose on behalf of the people. The closest he came was to say that it should stay behind closed doors. He said that he’d been in Vietnam and never thought he’d see anything worse, and he had in that courtroom.

2.  Every conversation with a politician is hard. No matter what you do, it’s difficult to have an honest and meaningful conversation. Even politicians who are generally open and honest can suddenly find themselves held back by institutional barriers to transparency.

I could have spoken to Meghna for a few more hours, but the Supreme Court had just announced its ruling on marriage equality. We walked back toward the WBUR studio and as she turned to walk up to the business of reporting on a day that would turn into one of the most newsworthy of the year – marriage equality, Obama’s eulogy in Charleston and a manhunt for escaped convicts – one takeaway from our discussion stayed in my mind. At some point in our discussion, she stopped and said this, “Mindfulness is the answer to every question you could ask me.”

Listen to Meghna daily at 3 p.m. on Radio Boston and online anytime.