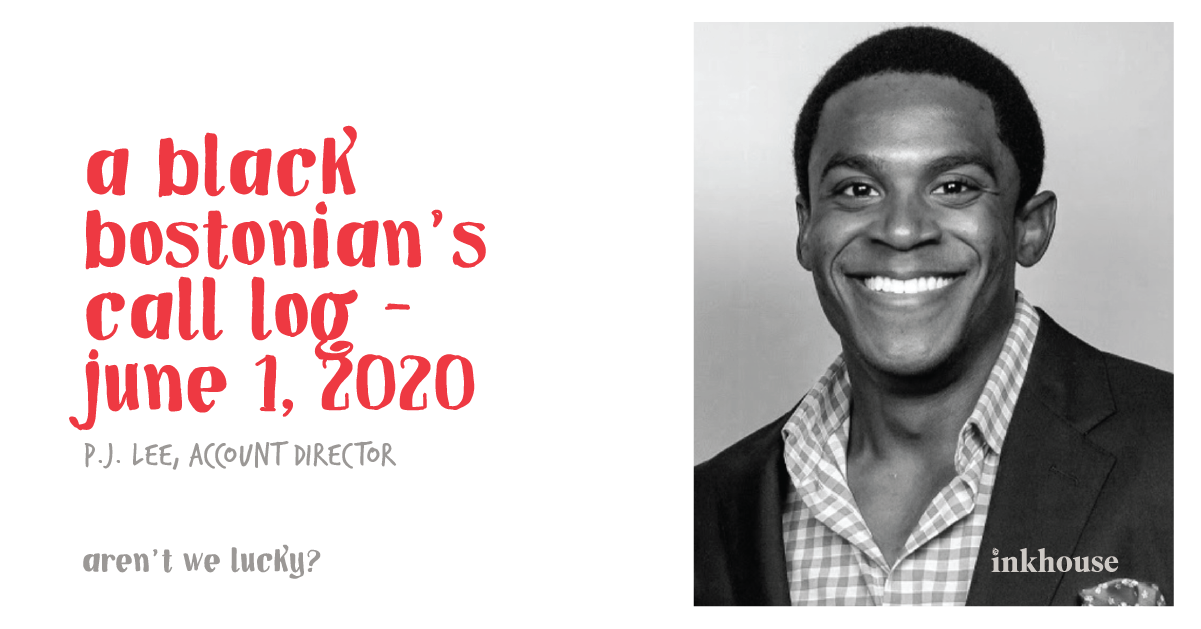 “Oh my God, hi! How are you doing!? I’ve been watching everything that’s happening on the news, and I’m just devastated by it all!”

Before I could respond, I took a brief mental pause and an audible deep breath. Every bone in my body wanted to explode with a “HOW DO YOU THINK I’M DOING!” response, but I knew that my close friend was coming from a good place. I tried to put myself in her shoes for a second, thinking about how many times she had most likely debated on even giving me a call as her white guilt continued to compound, unsure of how to approach the subject of racism with me. It was something we had talked about before, and she was very aware of my personal struggles, even those predating my college years, but there was something so profound about this almost overnight racial reckoning that had shifted everyone’s perspective, no matter where on the color spectrum anyone fell.

I took that deep breath and gave my response: “I’m all right, I guess.” I couldn’t deliver the classic “I’m good!” or “Just fine!” because either would have been so far from the truth. I was a wreck. I was in disbelief of the racial uprising I was witnessing not just on TV but right outside my front door. I was sitting in my high-rise apartment in downtown Boston, yet the previous night, from my balcony, I’d watched a massive stream of local activists who looked like me march toward the State House. I was feeling every emotion under the sun—anger, sadness, worry—but was unsure how to react to it externally. Should I be down there with them? I had wondered.

“I just can’t imagine what you’re going through right now, how hard this must be for you.” I’m pretty sure the last time I had watched this much consecutive local news coverage was the Boston Marathon bombing. The smell of my stale Nespresso Dolce coffee and barely touched Tatte breakfast sandwich overwhelmed my senses as I took another deep breath before I began to provide any sort of response, as this question is the one that irks me most.

What used to be something that I felt and dealt with internally and privately had now been broadcast on the world stage, and I had no idea how to process it. Part of me thought, Wow, people are finally noticing all of the struggles and hardships that I’ve faced up until this point; maybe a change finally is going to come! While another part of me said, All of these Black people who looted these stores on Boylston Street are going to be arrested, and we’ll be back to the coronavirus case count by the evening news cycle. This feeling of adversity wasn’t supposed to dissipate overnight, and neither was this trauma, which was so all-encompassing that I couldn’t bury it under the rug any longer.

“Well, let me know if you need anything! I’m so worried about you.”

I was worried about me too. I worried about the first in-person interaction I’d have with a white resident in the lobby of my building who might mistake me (again) for a dog walker or food delivery person, instead of their neighbor, as we both approached the elevator. I worried about what would happen once the luxury storefronts removed the boards from their windows—would this entire movement become a forgotten memory? I worried about the repercussions of these actions on the interactions I would have with my white counterparts, both professionally and personally. I worried about everyone being able to truly comprehend the reasons for the uprising that was happening before their eyes, or if they would finally take it at face value and consider it just a passing moment in time. 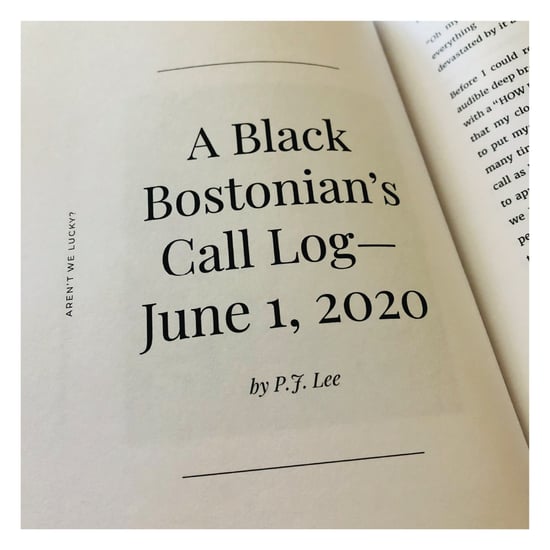 “This shit is crazy, fam.” The voice of my fellow Black, gay, and almost-thirty-year-old peer coming through the phone brought me instant comfort and familiarity in a desperate moment. Finally, I could provide my unfiltered take on what was going on and how I was truly feeling, without needing to censor myself. Maybe this would be the conversation I needed to pull myself out of the state of despair I had been stuck in since the first protests hit the local news stream yesterday evening. I hoped that after this phone call I’d have the energy to hop on the Peloton, maybe even eat lunch, or, at the very least, shower and brush my teeth and pull myself together.

“I just can’t believe how many times I’ve had to explain all of this. I’m so exhausted.” The deeper I got into this conversation with my Black peer, the more I realized that we were feeling the same things, but not in a good way. We had been having the same kinds of conversations with our friends and colleagues all day. Somehow, because now everyone was suddenly realizing how we as a society have totally missed the mark on race relations in all degrees of our lives, it was now on us, as Black people, to try to explain what these missteps were.

It was now on us to relive all of the moments we were passed over for promotions (I have double the client load and direct reports she does!), or not asked out for a second date (Was I just fetishized for a one-night stand?), or had an unjust interaction with a cop (Was that traffic stop really routine?). We believed that explaining these instances in conversation did contribute to the greater good, and we truly did hope that sharing these stories would make a difference, but was the severe amount of trauma we were experiencing by pulling these moments out from under the rug with every retelling worth our mental stability (or what was left of it, anyway)? 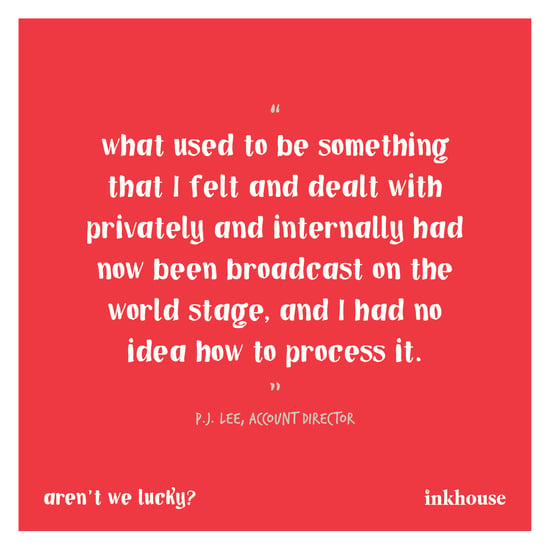 “Why don’t you come over?” As I went on and on to my mother about how stressed I was, how I hadn’t eaten all day, and how broken and drained I felt from the stream of phone conversations I’d been having, she invited me over to my childhood home. No motive, no agenda, no expectations. I exchanged my house leisurewear for my “outside” leisurewear to make the familiar twenty-minute trek from downtown Boston to my parents’ house. While part of me felt guilty that I was breaking quarantine to go see my mom, that feeling was quickly eclipsed by the anguish and confusion that had transpired over the past twenty-four hours.

When I got to my destination, I was greeted not with hugs and fanfare but with the smell of my mom’s classic ackee and saltfish, a traditional dish that she and her nine siblings used to make weekly growing up in rural Jamaica, before they immigrated to the United States in 1990. That aroma was all the welcome I needed. As I made my way through the home that my parents purchased thirty years ago through a broker who originally didn’t want to sell it to them because “people like you usually buy on the other side of town,” I found my mother sitting on the couch in the living room, watching a prerecorded episode of the Wendy Williams show, drinking a glass of her favorite Moscato wine. We didn’t say a word to each other; I just poured myself a glass and sat down on the opposite end of the couch.

As Wendy Williams discussed which Real Housewife of Atlanta was her favorite and why Kim Kardashian and Kanye West’s divorce was imminent, my mom and I just cackled along with the audience as we sipped our wine from our plastic tumblers. It was in this moment that I realized everything would be okay. The current widespread issues with diversity and inclusion would need to be addressed both inside and outside the workplace. The disparities surrounding COVID testing in underserved communities would need to be confronted. The repeated unjust killings of Black men and women on the national stage would need to be stopped. We were talking about a “new normal” post-pandemic, but the past twenty-four hours had proven that there’s no normal until racism is finally addressed in this country and meaningful change finally comes to fruition.

I knew I would play a role in this movement. I knew that through actions taken within my workplace, through my local LGBTQIA flag football league, and through ongoing conversations with my friends and loved ones, sharing my experiences and what I had learned from them would be integral in delivering change and understanding in my own way.

For now, though, for just this one moment in time, the only person allowed to ask me, “How you doin’?” is Wendy Williams, and I hope that’s okay with you.

This essay is a third-place co-winner in our 2021 employee writing contest and appears in our book, Aren’t We Lucky? Stories of Resilience from the Inkhouse Community. Download your copy here. 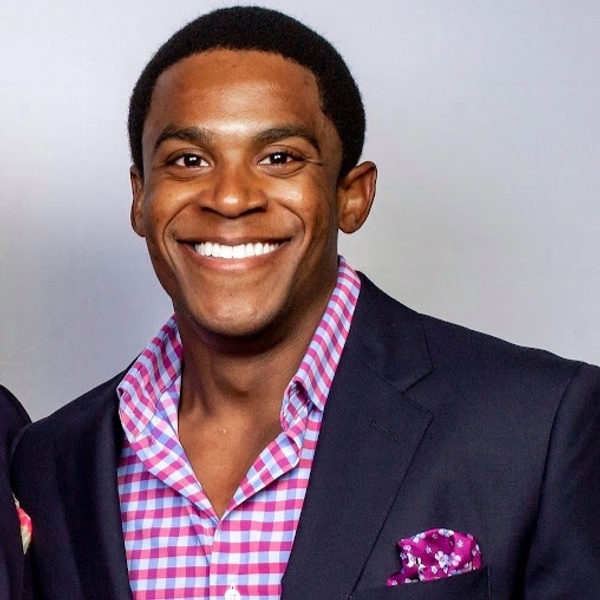 P.J. is an account director at Inkhouse and a bona fide Bostonian with a passion for technology, Peloton, and diversity.