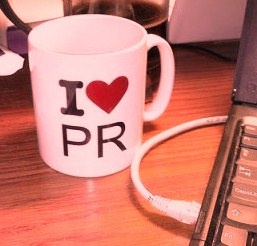 A Day in PR, Through Haiku

I’ve always loved the haiku – it’s quick and concise, yet it can be so powerful and moving. Growing up, while many of my classmates preferred to write long, flowing poetry in English class, I found myself drawn to the simple, straightforwardness of the haiku.

Fast-forward to the present. As a PR gal, I’m constantly looking for ways to get my clients’ news and important messages heard above the noise – and to do that, I’ve usually got about 15 seconds on the phone, three sentences in an email or 140 characters on Twitter to make it happen. It’s no wonder the succinct haiku remains at the top of my list.

Last September, The New York Times posted an interesting piece on “new-form” press releases – company announcements unveiled on a blog, via Twitter or even through an offbeat poem, versus a traditional press release distributed over the wire. My favorite cited example was Google’s 2011 acquisition of Zagat, announced by Google exec Marissa Mayer via Twitter as a haiku:

Zagat and Google now one;

Of course, the authors write, clever corporate communications can sometimes backfire. They cite HubSpot’s decision to announce its acquisition of OneForty solely through a series of Twitter messages. Though social media enthusiasts loved the approach, many complained they wanted to see a more standard news release. In fact, one user tweeted that it was the “most annoying press release format ever.”

The traditional press release certainly still has its place, in some capacity, but that’s a different blog post for a different day (though I’d recommend you check out this post by @moleary on a related topic).

As follow up to the great post 33 Signs That You Work in PR by @bamonaghan, I thought I’d walk you through a day-in-the-life of a PR agency lifer – presented in haiku.

Comes to me while in shower.

Jumps out to write down.

And it’s only nine.

Wait, there is another one?

I thought you'd know what that means.

For my wedding day?

Time to catch up on writing.

Got some others? I’ll be tweeting these using the #PRHaiku hashtag, and encourage you to add your own on Twitter or in the comments below. You can follow me at @jillcn.