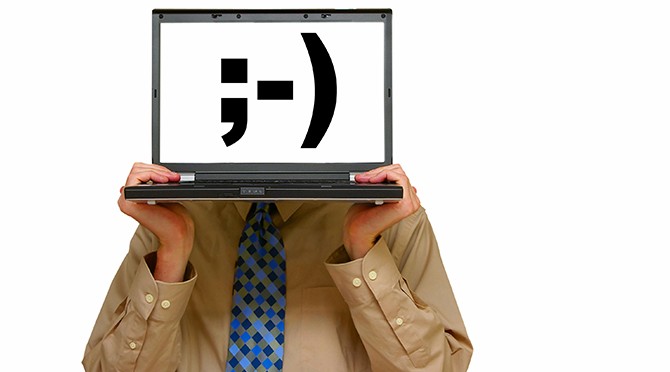 Are Emoticons a Communications Crutch?

As part of an industry that counts written and verbal communications as an art, I think about concise, clear and compelling communications often. Back in 1995, I was taking a required English literature course at Syracuse University. In the first class, the professor looked up from his yellowed and tattered teaching notes that clung together with the help of scotch tape, and said, “Women use more punctuation in their writing because they cannot express themselves as well as men.”

I dropped the class. However, annoyingly, his words creep back to me every time I am motivated to employ a smiley face in an email or social media update to better convey my meaning. I regularly make resolutions to eliminate emoticons and extraneous exclamation marks from my communications, yet find myself reaching for them nonetheless.

What should we do? As in most things, I think a careful balance is in order. Yes, emoticons can become a crutch, but only if we let them. A smiley face is often warranted in an age of rampant sarcasm that isn’t clear in written communications. However, maybe we just need to try harder.

Leslie Lee wrote a great piece, “Punctuation, Social Media, and Evolving Rules of Communication,” that examined this issue and how Twitter could actually make us better writers. I believe it can. Personally, I love Creative Nonfiction’s #cnftweet contest that seeks tiny truths in 120 characters each day (check out @cnfonline for details). It’s a great way to force the creative process – in brief.

So if we find ourselves slipping away from the lovely art of crafting brief yet compelling communications in favor of silly faces, perhaps we should pause and think twice. I am first in line. And if that doesn't work, I will happily give up the smiley face in favor of the snark (also known as the “Percontation Point” and the “Irony Mark”), which is a lost punctuation mark that conveys sarcasm.

BuzzFeed has a handy link to 14 Punctuation Marks That You Never Knew Existed. I am committed to finding the right words to convey my meaning, and will think again each time I type a smiley face in place of words. But I won’t object to bringing these cool punctuation marks into common usage either.