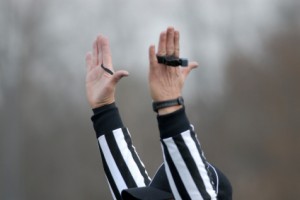 People were really upset about that whole replacement referee thing, huh? To quickly sum up the situation for those who weren’t following it, the NFL’s collective bargaining agreement ended at the completion of last season and since no agreement could be reached prior to the beginning of this season, replacement referees were hired. And the results were not good; blown calls, unnecessary fines, dogs and cats living together, mass hysteria!  That, combined with learning there will be a bacon shortage, was basically my own personal hell last weekend.

As Michael Rosenberg wrote on SI.com today, it’s time to fix this thing, Commissioner Goodell.  And he did, as of this afternoon. But even though he has fixed this mess by getting the real refs back on the field, I’m taking it a step beyond that and talking about how this situation deserved better communication to a fan base that pays the league to the tune of $9 billion a year. While better communication would not have justified the egregious calls we have been forced to contend with, perhaps it would have gone a long way in getting the fan base behind the NFL regarding an important issue for the long-term health of the league.

Almost every leader, in every industry, has to make decisions that are unpopular. But they usually have a reason to do so, and it’s their job to make that decision and stand by it. If it ends up being the wrong decision, own it (which is a whole different blog post in and of itself). It’s not enough to take a “Because I’m your CEO and I said so” stance, despite the fact that a similar argument worked for my parents for most of my life.

There are three takeaways I’ve gleaned from this fumble (pun so intended it’s almost not funny) to apply to the real-world when making a tough and likely unpopular decision:

1) Be transparent – An agreement could not be reached prior to the start of the season, and it isn’t just because people were being stubborn. The Commissioner and the owners have their reasons for the lockout. There has been a lot of discussion about money, obviously. To quote Kanye West, which I do far too often, “Money isn’t everything, not having it is.” But the desire for extended training and performance-based assignments has merit. Regular refs blow calls too. It’s important for a leader to explain why something has long-term benefits even if it’s (very) unpopular in the short term. You need the organization to trust you and trust you are making the best decision and for the right reasons. The NFL did not explain this well and so they had no support or understanding when replacement refs began blowing calls.

2) Be forthcoming – Tackle (yes, another pun!) the issue head on. There is almost never a situation where no comment is the best comment, even in a fast-moving situation. Silence can be deafening, particularly when you look like a big, bad organization. Explaining the why and the how at least gives people perspective. This is particularly important in the age of social media, where comments (and non-comments) experience an unprecedented ripple effect of tweets, retweets and shares and others start speaking more loudly than you.

3) Be a leader– Whether the commissioner of the NFL or the CEO of a company, it’s important to be out in front of the issue and be prepared to deal with the consequences and criticisms that go along with it. The “I’m not available” tactic will not win many fans in the media or the market. It’s up to Commissioner Goodell to speak out regarding these mistakes and lessons learned, as well as be prepared to defend decisions he made.

Hopefully Goodell will heed this excellent advice. Whether or not that happens (Vegas says bet against it) there is a valuable lesson to be learned in the mistakes of the NFL for all business leaders. Even the replacement refs can’t blow the call on that.