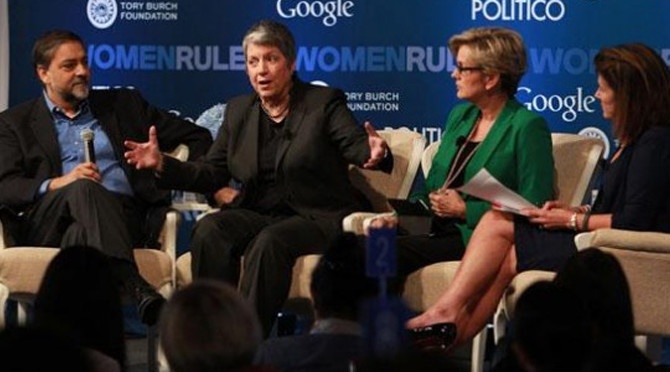 It’s not often that the words “government” and “innovation” are uttered in the same breath, though they shared center stage at Thursday’s “Women Rule: Cracking the Code” event here in San Francisco. The morning conference, which was sponsored by POLITICO, focused on the lack of women in the tech industry, as well as the relationship between Silicon Valley and Washington, which can be described as complex and unique at best.

Plenty of women are interested in the STEM subjects (Science, Technology, Engineering and Mathematics), said Indiegogo founder Danae Ringlemann in the first panel of the morning, though they’re not always invited to the table. Perhaps this is a result of a “boys club” environment in these fields, the panel acknowledged, though just as likely a contributing factor is that women are simply programmed differently than their male counterparts. Within a team environment, for example, there is a tendency among men to think “win or lose,” whereas women think “collaborate and engage,” noted SherpaFoundry CEO Tina Sharkey. This mentality can result in women supporting the ideas of teammates more often than they spearhead those of their own.

Learning not to internalize rejection, as well, was an important obstacle for Intel’s Genevieve Bell to overcome, a habit that comes naturally to many men. Entrepreneurship taught Ringlemann to expect and embrace resistance in all forms, she acknowledged, which is a lesson female entrepreneurs from the Valley must learn when visiting Washington. Washington ultimately wants to do good, Sharkey pointed out, and innovation is often a means to an end, though the political world can be a roadblock. The panel advised female entrepreneurs to come to the District equipped with data and case studies that illustrate their company’s traction and potential to make a difference. “The thing you think is the biggest risk is never really that big,” Bell assured the audience.

Conversation in the second panel turned to workplace culture, which must foster flexibility for women, argued Jennifer Granholm, former Governor of Michigan. “As they say in the business world,” she quipped, “Culture eats strategy for lunch.” These issues are near and dear to our hearts here at InkHouse – InkHouse co-founder and principal Beth Monaghan recently joined Governor Deval Patrick’s Women in the Workplace Initiative, which seeks to examine and grow opportunities to advance women across the economic spectrum in the public and private sectors alike.

Panelist and Stanford Law School fellow Vivek Wadhwa cited Google and Facebook as companies at the top of the class when it comes to cultivating environments that encourage women advancement. Janet Napolitano, who is the President of the University of California system and former Secretary of Homeland Security, garnered a round of applause by accepting Wadhwa’s challenge to demand more extensive gender data from universities.

When it comes to motherhood, the panel acknowledged, the government can enact policies to improve circumstances for women in the technology industry, including passing legislation that mandates paid maternity leave. At a societal level, women will better be able to ascend company ranks with a greater acceptance of fathers taking paternity leave, as well. Only until we start appraising a child’s primary caregiver based on characteristics other than gender will we have made progress, argued Granholm.

Panelists from both sessions agreed: these issues will not be resolved as a result of a single conference, though there are tangible steps we can take to begin to make a difference. In order to advance women in technology in the coming years, Bell said, there must be successful women for young girls to emulate. To this end, women must seek out opportunities to mentor and, of course, vote for public officials who will prioritize the advancement of women and, as Napolitano put it, “change the world in the right way.”