Effective PR Strategies: Timing is Everything 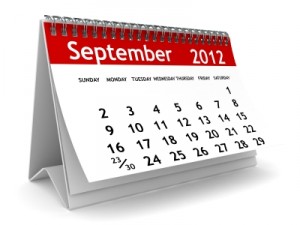 A wise man/local celebrity once told me that in the public relations world, the calendar means everything. These are important words to heed as we approach what might be the most news-packed few weeks of the year in technology. Perhaps around this time of year your biggest challenges include getting Junior dressed and ready for the first days of school, but I can tell you that for a PR pro, navigating the tech news cycle over the next couple of weeks might be even trickier. Consider:

We’ve written here before about helping your company rise above the din, but I’d suggest that for the next couple of weeks it may be wiser to avoid the din altogether, especially if you’re in consumer tech. There will be a lot of news to report, and only a finite pool of reporters available to cover it all. The media understands this as well as anyone. Bridget Botelho, news director at TechTarget, tweeted recently:

@bridgetbotelho: A little advice to PR folks: Announce news before or after major conferences so you aren't competing with every other vendor for attention.

Your PR strategy likely will benefit from the age-old practice of picking your spots. I recommend developing a calendar that incorporates the above events, as well as any planned by those in your industry. If you’ve got your ear to the ground and learn of a competitor announcement, be sure to note that as well. With a detailed calendar you can decide where it makes the most sense to slot in announcements or proactive outreach. Calendars are also helpful in scheduling and producing content. As you can see with the big events listed above, the Labor Day week is most likely not the optimal time to announce the latest version of your product.

Also, be flexible. Don’t hesitate to change plans if unplanned circumstances arise. A couple of weeks ago I was planning a Boston event with a client when Xconomy announced their big data forum for the same date. Rather than try to draw from Xconomy’s audience or asking people attend two events in one day, we decided to move the event a few days later where the industry calendar was clear.

Some planning elements will be out of your control—a competitor announces news on the same day you do, the stock market crashes, someone important passes away. But you can maximize your visibility if you develop an effective timing strategy around PR that incorporates the upcoming news cycle. Bottom line, the calendar means everything.