How to Give Good Quotes 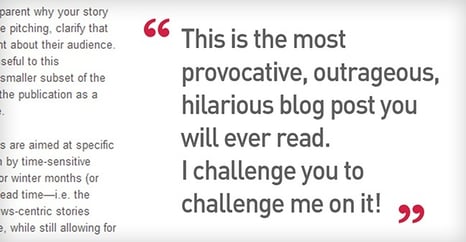 Everyone knows that creative ideas never happen at your desk, looking at a blank screen or—even worse—seeing a steady stream of emails pervade the space. Right?

So, I took my salad to the kitchen and ate it at a proper table while reading Time. Leafing through the front of the book, near a photo of a Muslim Brotherhood rally, were some large orange words that read: “It represents the archetypal ‘turd on the plaza.’”

I put down my fork.

Oliver Wainwright, a British architecture critic, was lambasting the new ArcelorMittal Orbit structure that the highly talented Anish Kapoor designed for Olympic Park in London. The picture of the structure was right there, under the quote, but it is so strange looking—a rollercoaster, meets post-modern sculpture, meets something under construction—that my eyes had skipped over that mess and settled on Wainwright’s words, written large.

Ah, the power of the pull-quote. Don’t underestimate it.

As PR professionals, we spend a great deal of time considering our clients’ messages when responding to the media. But we always need to take that extra step and ask how we can make the quotes come alive. One way to do this is to think like a journalist—a copy editor, in particular—whose job it is to lay out a page (virtual or print) and make the content more interesting by teasing out pieces of quotes.

After lunch I skimmed a hard copy of the Boston Globe for this unscientific report on what types of quotes typically get the special treatment:

1. They express a major change:

“John Sununu, a Romney surrogate, said Obama should ‘learn how to be an American.’"

3. They use unexpected language that makes you stop and wonder what you might be missing if you don’t read the article:

“In my life, books increasingly seem to play the role of those falling geometric shapes in Tetris,” Jeff Jacoby wrote in a column about why we cannot read books as fast as we buy them.

4. They sum up a situation succinctly:

“This is a mystery, why anyone would want to kill people who never bothered anyone,” a cleaning company owner Jose Centeio said.