I believe in social media as a powerful channel that has changed the opportunity for productive discourse for the better. However, in my personal life, I tend to relegate it to a tool for keeping up with friends and family, until a few Sundays ago.

I was out on a walk with my husband, Patrick, two-year-old daughter and cranky French Bulldog, Ernie. Ernie was snorting along down Beacon Street in Newton when we saw an Airedale loose, slowly meandering his way across the road until he became interested in a tree near a yellow Colonial.

While I held back Ernie with the stroller, Patrick went up to the dog and tried to find ID tags on his collar. Unfortunately, his tag only had contact information for the vet, which was closed. A call to the police station was another dead end since the dog warden was off on Sundays and the officer suggested that I could either take him to a shelter or let him go. #nothelpful

So we took him home with us. Before we left though, I snapped a photo of the dog with my iPhone and posted it on Twitter and Facebook with the #newton hashtag on the off chance someone might recognize him. Here is my tweet:

On the walk home, I hung back with Ernie and the stroller, while Patrick stayed a few paces ahead of us with the dog to keep Ernie’s betrayed anger at bay (his jealousy was pushing the fur on his back straight up and every so often he's make a feeble attempt to lurch at the dog). #mydogisajerk

We asked everyone we encountered on our way if they recognized the lost dog, but no one did. So we settled into a plan to keep him overnight and bring him to the vet in the morning, where they would hopefully know his owners.

However, five minutes after we arrived home, I received an @ message from Peter Mahoney (@DragonDictator) who happens to be an InkHouse client and lives in Newton. He recognized the dog and had passed along my cell phone number to the owner! The owner and I spoke, and ten minutes after arriving at my house, the dog was headed back home.

Ernie was grateful he would not have to share his yard (or his pillow), and I found myself in a rare moment of disbelief that social media achieved what the police and good old-fashioned canvassing could not. #happytobeamazed 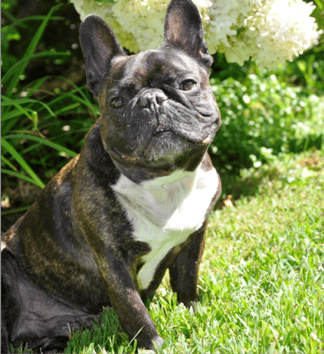