Ed met me at the office to save the plants. It was a Tuesday in March after we’d gone into quarantine. A few weeks earlier, he and I had closed down the office with a few others and had taken a selfie. Ed stood far back to demonstrate the new and awkward concept of social distancing. We were all laughing.

Getting the plants, we weren’t laughing anymore. Our landlord had told us the doors would be locked at noon until further notice. It was the day we knew COVID-19 wasn’t temporary. Ed and I walked past each other with pots, giving plenty of nervous space. I’m not a plant person, but I couldn’t think about returning to the office and finding them all dead, these living things that relied on our care. At home, I populated various rooms with them and added a recurring task to my calendar every Wednesday: “Water plants.”

Some of the largest plants had to stay at the office because they wouldn’t fit in my husband’s truck. I thought of their leaves dropping as they gave in to their fate. Would they ever be able to return to full strength? My mind traveled to when I was in Wyoming at Yellowstone National Park and saw miles of burned-out forests, victims of massive wildfires. Charred tree trunks rose up bare and black. The trees were lodgepole pines, whose pinecones, a guide on a horseback ride told me, open to reseed only at temperatures of 120 degrees or higher. They require devastation to renew. 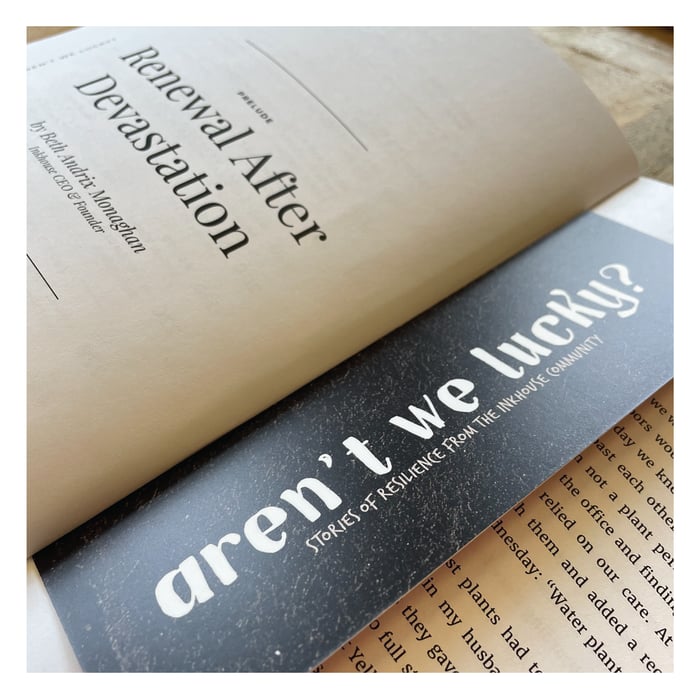 I was reminded of this fact a month later when I was in my home office, lining my notebook with revenue losses coming in by the hour. In a matter of weeks, Inkhouse lost $2.3 million. Clients were reducing their retainers. Some were laying off large numbers of employees. Others were just being cautious, spurred by venture capital warnings to cut costs and hunker down. Those intervening four weeks had made me nostalgic for the day we saved the plants, when the worst was only a worry.

And yet the rebound in the tech economy came as fast as the cliff. By early summer, our team was pulling together in our new virtual culture. We tried hard to replace the small and big moments in the office that add up to familiarity. In breakout Zoom rooms, we told each other about how we’d taken up baking or skateboarding since lockdown. We started a Good News channel on Slack. Someone posted that the hummingbirds had returned to her yard and were magical. We hosted peer panels during staff meetings and learned one employee’s coming-out story and another’s experience with sexism in India as a child. We did a virtual company off-site—our InSite—and baked scones “together” in our own kitchens.

By fall, we hated Zoom and created Focus Fridays with no video. We also discovered that it’s hard to know how everyone is doing when you can’t feel their energy as you pass them in the kitchen or sit next to each other in a meeting. So we decided to mask up and drive to employees’ homes when it was their turn to be promoted. One time, an employee’s mother came out with a tambourine. How many opportunities are there for such spontaneous joy ever, let alone during such isolation?

The last promotion I did was in late September. It was Ed’s—to the position of Inkhouse’s Waltham general manager—and it happened the week before I was scheduled to have a double mastectomy. I’d been undergoing tests all summer: stereotactic biopsies, a lumpectomy, who knows how many mammograms. By the time the official call came, having an answer felt like a relief. My surgical oncologist said, “Well, it’s cancer. Stage one, point-two centimeters. It’s the best possible way to get cancer.” I had two treatment options: a double mastectomy, or radiation plus five years of antiestrogen therapy. I didn’t want to have a choice. I’d already spent months making hard calls at work. Don’t the doctors just tell you what you have to do?

A mastectomy was the more aggressive but surer bet. My odds of a recurrence would be between 1 and 5 percent. I called my OB, who tried to make me feel better by telling me I could get “all-new boobs.” During those weeks while I weighed the options, I meditated. I wrote lists of questions for the surgeon. I sobbed myself to sleep, telling my husband that I didn’t want to have to make this decision. In the mornings, I walked. On one of these walks, I looked up as I neared an intersection and saw a tree with bright green leaves and branches that bushed out in an imperfect circle. Early-morning sun was coming through them, and they looked so alive.

I was about to continue on, when I noticed blue sky through a gaping hole in the middle of the leaves. The tree had been modified to accommodate some power lines. It must have happened a long time ago, because it looked as though the tree had naturally adjusted to its new circumstances. I smiled as I stood there, taking it in, and then snapped some photos. As I walked up toward the main road, I knew I could do the surgery.

Many times during the pandemic, I didn’t know if Inkhouse or I would be okay. While I was out for two months in the fall, recovering from surgery, Inkhouse’s revenues also recovered. I used to think resilience meant standing steady in a storm. But that’s not how it works. Resilience is a willingness to make adjustments so we can withstand the storm and allow it to change us. It requires faith that renewal will come after devastation. 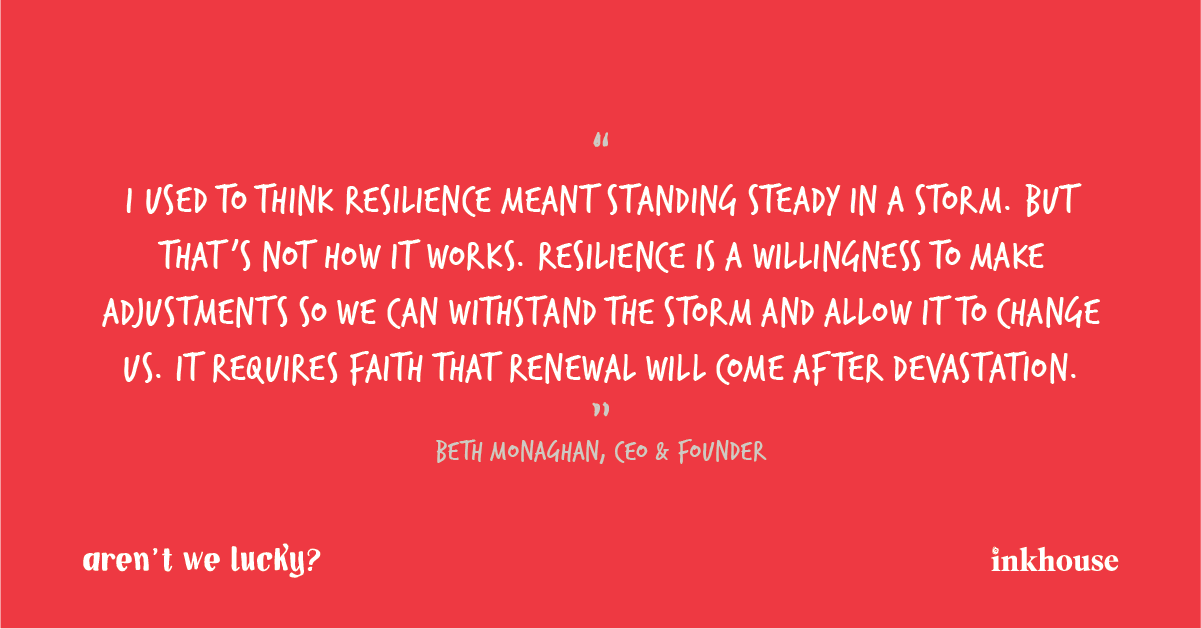 The essays in our book, Aren’t We Lucky? Stories of Resilience from the Inkhouse Community, are about how we believed and coped—and how we changed. Download your copy here.