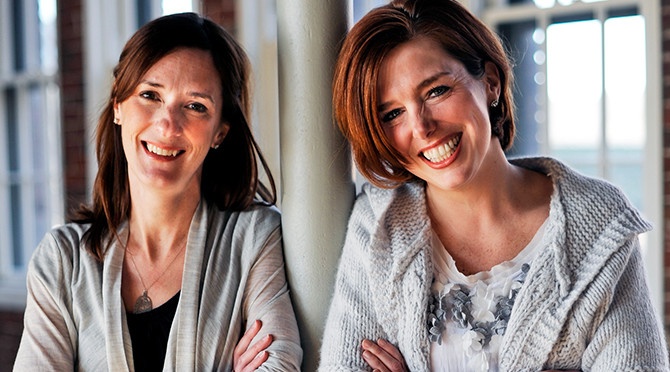 The tiny quilt arrived the day our baby got home from the hospital, an embroidered reminder in light blue of the best bosses I’ve ever had.

As a longtime public relations guy and former journalist, I’ve worked in plenty of places – three PR agencies, two colleges and five newsrooms, to be exact. I’ve had plenty of bosses, too, that fit all types: the “everybody’s pal” boss, the “has anybody seen him around lately?” boss, the macho tough boss, the awkward intellectual boss.

But it wasn’t until I came to InkHouse that I finally worked for two people who were at once smart, business-savvy, immersed in daily company operations and cared a lot about their employees. With Thanksgiving just passed, I’ve been thinking about those I’m thankful to call my bosses.

Beth Monaghan and Meg O’Leary created InkHouse in 2007. They’ve each worked on both sides of the agency/client relationship, which may explain some of their caring, engaged approach with employees. And let’s be honest: employee turnover is a huge, expensive problem in PR agencies so that might be behind Beth and Meg’s caring approach, too.

But having worked in PR agencies now for 10 years under plenty of bosses, I can tell when maximizing agency profit is driving the bus. That’s not the case at InkHouse.

There was that time when the CEO of our largest client was abusive to InkHouse staff. So Beth and Meg fired the client, monthly revenue be damned.

That time when an InkHouse staffer and first-time mother was going through a difficult pregnancy, confined to hospital bed rest months before the due date, and Beth and Meg organized a group of InkHouse moms to set up the nursery at her home. Following their lead, the InkHouse team created an upbeat playlist to lift her spirits during those long months in the hospital.

And that time when Beth and Meg created a “No emailing from 7 p.m. to 7 a.m.” rule for staff – nearly unheard of in the always-on PR agency world – to make employees’ lives just a little less stressed.

Don’t get me wrong, InkHouse led by its two principals is a flourishing business. It’s been named “Small Agency of the Year” by industry publications like PR News and Bulldog Reporter, a Top Place to Work by the Boston Globe and one of the fastest growing private companies in Massachusetts the last four years. InkHouse’s staff and client roster have nearly doubled in the last two years and InkHouse is so far ahead of the rest of the PR and social media industry that Beth and Meg have been featured on NBC News, NPR, the Associated Press, PR Week and Forbes, among others.

In the last two years at InkHouse, I’ve learned more about content marketing, cutting-edge social media practices and lead generation than in seven years combined at other PR agencies.

But it’s not the PR expertise or even the business success that sets Beth and Meg apart. It’s the daily engagement with and genuine interest in staff – the impromptu party when a staffer’s book is published, the paid weekend for junior staff on Cape Cod to work on a big project, the attendance at an employee’s family funeral.

Even when my son Dax is well into his teens, I’ll always remember the extra four days we spent with him in the hospital after he was born because of the skin discoloration and fever spikes that doctors couldn’t explain. I’ll remember how worried my wife and I were, sleepless and uncertain about his future.

And I’ll remember the soft blue baby quilt waiting for us when we arrived home.

“Welcome home, Baby Dax!” the card read. “From Beth and Meg and all your friends at InkHouse.”