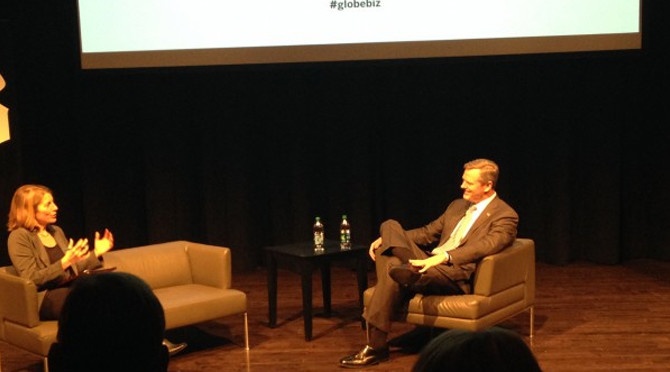 The Boston Globe is placing bets on Boston and journalism. Last night, owners John and Linda Henry hosted a launch event for the new Business section with a Q&A between Sacha Pfeiffer and Governor-elect Charlie Baker. Pfeiffer didn’t disappoint the crowd and asked all of the tough questions – non-profit CEO compensation, the impact of sea level rise on our heavy development close to the shore, healthcare reform and budget cuts. Baker was open and candid, joking, “Do you have any easy questions?”

The new Business section debuted yesterday, and I can’t think of a better time. We have a new mayor, a new incoming governor, and a new Chamber of Commerce CEO in the near future. In the video the Globe aired last night, which appears below, commercial real estate reporter Casey Ross notes that in 2016, 7 million square feet of new buildings are scheduled to open in Boston, a level we’ve never seen before in our city’s history. Columnist Shirley Leung, whom Editor Brian McGrory called, “one of the most talented columnists in the nation,” noted that, “Business and the economy remain the biggest stories in this town.” And Pfeiffer talked about her plans to make the Business section something you have to read “because the stories…are just so interesting and unusual.”

The team is led by Business Editor Mark Pothier whose enthusiasm introduces the video. Last night, I was happy to run into some of the veterans I’ve read for years who will be contributing to the section – people like Beth Healy (financial and investigative) and Scott Kirsner (innovation). There is also is a smart team of newer faces – Jon Chesto, Taryn Luna, Priyanka McCluskey, Callum Borchers, and more (see the Globe’s masthead).

The energy in the room was high, and attendance was a who’s who of Boston business, despite tough competition for attendees from The Massachusetts Conference for Women (where Hillary Clinton keynoted earlier in day), and BostInno’s 50 in Fire. I’m proud to live in this city, one that we often note is small and interconnected, yet one in which three business events can all thrive.

Overall, the new Business section will now have its own section front five days a week and a bunch of new features, including “Talking Points,” which is a summary of the top business news, and the “Agenda” with event highlights. The inside pages bring together a mix of the driving forces of our economy, from hip startup workspaces, to apps shaping our digital social future, to serious issues that affect our healthcare system. And “Bold Types” is a fun take on personnel changes; yesterday’s inaugural edition had musings about the next head of the Massachusetts Tax Payers Foundation and The Chamber.

The best part about the new business section is that there will be more of it – with a continued effort on serious journalism. How does a bombarded public know which voices to trust when anything can break through by latching onto a trending Twitter hashtag, or leaning on a radical point of view? The Globe just might be the only newspaper in America that is investing serious money in actually expanding the kind of journalism that focuses the noise. I’m looking forward to more.