The Unofficial Rules of Facebook: How to Get More “Likes” or Get “Unfriended”

There’s no denying it, Americans are addicted to Facebook. While other platforms like Twitter and Instagram are gaining major traction, Facebook still reigns supreme (especially among young adults). According to a study of 1,000 Americans ages 18+, that InkHouse recently did in partnership with GMI Research, we discovered that Facebook users across ages have clear preferences about what they want to see on their newsfeed.

How to get “unfriended” – tell me what you had for breakfast, who you voted for and how great you think you are…

Based on the 75% of respondents who reported using Facebook, the top reason cited for “unfriending” someone was too many meaningless updates (aka no one cares about your breakfast croissant). Political posts ranked second and bragging posts came in third.

When we asked people what they wanted to see more of from their friends’ Facebook posts, almost 54% said humor, followed by photos of kid and pets. 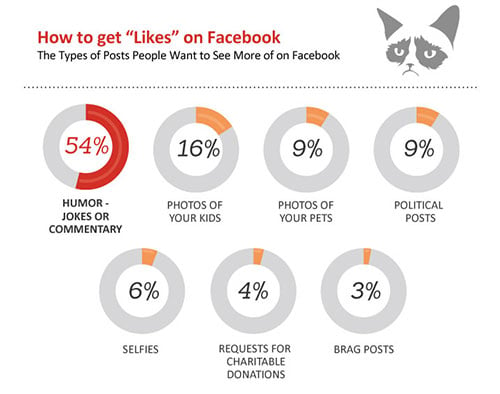 Some interesting (and humorous) trends appeared when we looked at Facebook users’ gender preferences. While both men and women appreciate humor equally, their photo preferences differ. Interestingly, the guys seem to like selfies a bit more, while woman prefer to see images of kids and pets.

So, what does this mean?

Facebook is addictive, but annoying posts are often more memorable than positive ones. As a brand or a company looking to engage users or recruit on Facebook, you must know your audience and use content accordingly. And if you happen to have a dog or a kid visiting in your office, don’t hesitate to grab a camera and post a photo on your Facebook page!

(And on a personal note, perhaps think twice before saying, “But First, Let Me Take A #SELFIE.”)

We asked questions about lots of other topics – from Facebook, to Buzzfeed, email versus social media and preferred news outlets. You can view the full results in our ebook, Read It, Watch It, or Tweet It – How Americans Read and Share News.