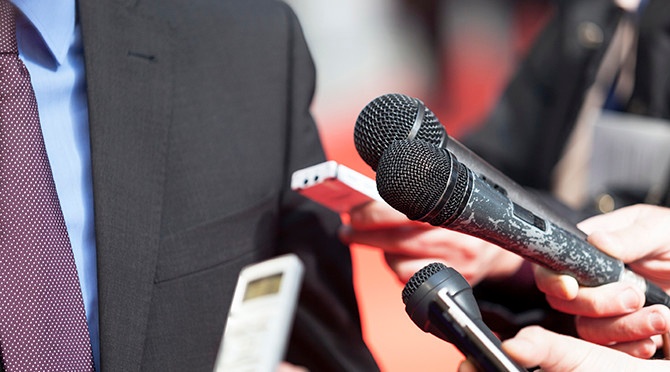 Three Things You Should Never Say to a Reporter

Agreeing to an interview with a reporter can be a pretty terrifying prospect. Making casual conversation is one thing, but making casual conversation with someone writing down everything you say and publishing it? If your first thought is “yikes,” you’re not alone. The truth is that being interviewed by a reporter doesn't have to be all that scary. Reporters are just trying to do their jobs. Most typically, they’re speaking to you because you’re an expert on something. They’re genuinely interested in what you have to say!

There are some general guidelines. It’s often helpful to treat interviews like conversations (albeit ones that are being recorded). Remember to be friendly and polite – reporters are humans, after all. They’re often busy and stressed so a little bit of “Hi, I enjoy reading your work” never hurts.

It’s also essential to know who you’re talking to and what you’re talking about. You should receive detailed briefing information from your PR firm, and it’s always good to do some digging into past Tweets and articles.

So while talking to a reporter doesn't have to be something to sweat, be mindful of these common responses and avoid them.

Interviewees are often tempted into this one after being asked specific information from a report or about their companies’ profiles. While it might be meant in helpful earnest– I could save everyone time by pointing to where this is spelled out– it more often comes across like the interviewee just can’t be bothered or isn’t really interested in participating in the interview. Or may not even know the answer.  It also means an extra step for a time-pressed reporter who may want a one-sentence conversational answer. A better approach is to give an overview of the information and send a link to the website afterward.

On the record/off the record is a tricky world to maneuver, with journalists and interviewees frequently following different rules. Here is what they teach you in journalism school (hey man, I didn’t get that degree for nothing):

We generally counsel to avoid confusion entirely by keeping on the record. If you feel that there’s something you think the reporter needs to understand but don’t want to be quoted, you can ask your flak to communicate it to him or her afterward.

Reporters are busy and often don’t have time to dig deep when it comes to background information. A little bit of kindness when it comes to explaining the basics will pay off— a misinformed reporter is never a good thing. If you’re starting to get the sense that you might as well be speaking Greek to the journo on the other end of the line, start by asking, “Would it be helpful if I gave you some background on the subject? I’m happy to start at the beginning.” That way, the reporter will actually understand what you’re talking about, making for a well-informed, nuanced article.