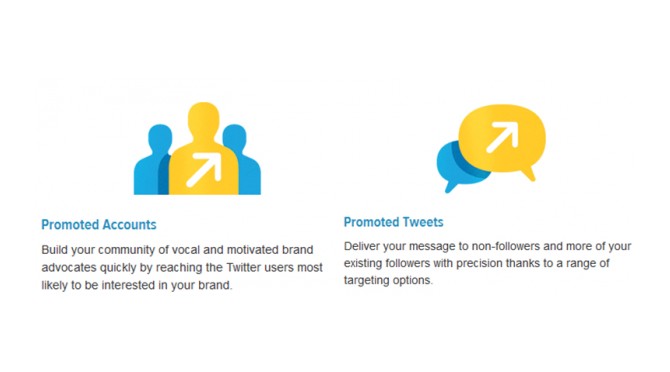 There are two types of Twitter Ads:  Promoted Accounts and Promoted Tweets. Both great for increasing brand awareness but they have separate use cases.

Promoted Accounts are best used to increase followers. That’s it. Engagement will increase slightly, but the goal of Promoted Accounts is to find people who would be interested in your handle based on who you target. For targeting both Promoted Account and Promoted Tweet campaigns, enter in handles and usernames of competitors and/or top influencers in your industry. This will target people who follow those handles – ultimately your target demographic and who you want to reach.

Promoted Tweets should be used when you have a large announcement or campaign and want to reach a larger audience than you would organically. Promoted Tweets can expand the reach of blog posts, websites, events, releases and more, so be strategic with this ad. If you have a large announcement, plan ahead and set some money aside to promote tweets around the news. Is the announcement about women in business? Maybe target the ads specifically to women. Think about who would be best to target and the demographic you’re trying to reach. Twitter gives lots of targeting options including:  location, gender, keywords, interests, usernames and more.

Twitter Ads elevate your account to a new level and, ultimately, to new sets of eyeballs. Budget-wise, it works the same on both types of ads: you have an option to add a total budget which will automatically stop the campaign once the budget is reached. But you have to set a daily maximum which will cap the amount you are willing to spend each day. With Promoted Accounts, you will also enter in the maximum amount you’re willing to spend per follow. Promoted Tweets charge you for every engagement: replies, retweets, favorites, follows or clicks anywhere on your Promoted Tweet. It’s recommended to go with Twitter’s suggested bid and adjust as necessary.

Pacing options allow you to determine how often you want the ad to run. This will help show the ad evenly throughout any given day, so you do not reach your daily budget within the first few hours of the day.

For both Promoted Accounts and Promoted Tweets, Twitter provides a section to manage and monitor all campaigns. You can edit a campaign at any time or pause a campaign. If the ad is not performing well and you haven’t gained many followers or haven’t received much engagement, change the bid or change the wording of the promoted tweet. Measurement and analytics should not be overlooked when running an ad campaign.

Need help or have any questions about setting up a Promoted Account or Promoted Tweet campaign? Let us know in the comments below.