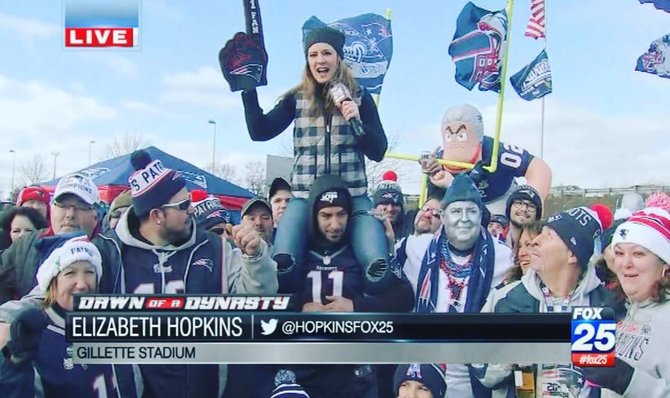 Continuing our series of conversations with journalists, I recently spoke with Fox 25's Elizabeth Hopkins for a Q&A on what it's like to be in broadcast, what her favorite story of the past year was and what makes for a great TV story.

Q: A fun question to kick things off, how often do people recognize you in public?

A: If I’m lucky, they don’t. It takes a lot of heavy construction equipment to get me camera-ready, followed by a solid shellacking of hairspray. Most days off, I look like a shadow of my professional self.  On those days, I’m sure most people think they’ve caught a glimpse of the older, less attractive sister of Elizabeth Hopkins.

Q: Beyond breaking news, what makes for a great broadcast story?

When PR reps are able to offer not only a product or a service, but a person directly impacted, allowing us to weave a rich story with a person at the center, it makes the “pitch” process in the newsroom go much more smoothly.

Q: What types of stories that may have been great for broadcast in the past would you say are no longer appealing?

A: A good story is a good story no matter what. But the market, our daily mission and the station identity can shift. As an example, when we were owned by Fox News, our morning show had a decidedly “lifestyle” focus during certain hours. Now that Cox owns the station, the focus is giving people what they need to know and getting them out the door without having wasted their time. Both are valid ways of presenting the day’s news, it just depends on the mission.

If you can identify a station’s mission (i.e. hard news, creative story telling) pitches are made easier.  Also, within the station, each reporter has his or her own kind of “brand.” The strength of a journalist may be in their knowledge of forensics, politics, motherhood, community, etc. If you can match a story to a reporter who will get excited about what you’re offering up, it makes the pitch process easier for you, as well as for the journalist who has to make the pitch internally.

Q: What would you consider the most significant story you covered last year?

A: The most significant story I tell is the next one. The one I’m doing today. In news, we say you’re only as good as your last broadcast, so we’re constantly looking forward. Having said that, there have already been so many highlights in the recent pact. A high speed car chase, the takedown of a fugitive on the run, the AFC Championship game, the Super Bowl, the blizzard last week and so on. Boston is such an exciting, constantly breaking-news market. This job is different every day, and always exciting.

Q: What would you consider your favorite story from last year?

Q: Do you find PR people helpful? Or do you prefer they pitch the news desk?

A: My role at the station currently allows me to set up stories ahead of time, so I’m always looking for an idea. When it’s pitched to me directly and I connect with the idea, I can shepherd it through the planning process in a way that someone who’s not turning daily stories can’t.

Q: What pitching advice would you give to PR pros?

A: Firstly, keep pitching. Silence doesn’t mean a perpetual “no,” it just mean that story didn’t work for this day. We’re so inundated by calls and emails of all kinds that, in most cases, we simply don’t have the time to explain why we passed on a pitch. Each pitch should have a local and timely “peg.” A story on a new treatment for lung cancer could be considered “evergreen;” we could do it today, tomorrow, whenever. But a story on a new treatment for lung cancer on the day Jerry Remy announces he’s being treated for a lung cancer relapse is a must-book. Sometimes the story is told because of content, and sometimes it’s context. Make sure to be aware of the day’s headlines so you can be ready to pitch someone or something you represent that morning.

Also, it’s critical to be ready. Have your clients be ready. If we can or want to turn a story today, it doesn’t mean we can or will want to turn it tomorrow. In most cases, we don’t have a lot of opportunity for set-up. When the news desk reaches out to you at 9 a.m., it’s likely we’re trying to set something up for noon.

Q: What’s the biggest challenge you face as a broadcast reporter?

A: It’s all a challenge. Being accurate, being first, being fast. Setting aside your personal life every time something breaks. It can make you homesick, but the work is worth it.

Q: What’s the one thing about working in broadcast that you think most PR people don’t know?

A: We need to know the detail of the pitch that is most interesting in order for it to be green-lit at the station. Many times, PR emails will say something along the lines of ”we can share with you the findings of a new study.” While that might work for print or longer leads, I need to know what the findings are off the bat and why they’re significant. On most days, I won’t have the time to call to dig out the nugget.

For example, I was recently pitched a story on a hospital’s treatment of student athletes to prevent cardiac deaths during play. It’s a good story, but what made it really interesting is that the doctor behind the treatment isn’t even a cardiologist. It turns out he saw a friend die on the basketball court one day, and since then he’s made it his mission to preventing those tragedies. He’s frustrated that most kids, schools and parents aren’t aware of the technology that can detect problems ahead of time. THAT is a great story. When you have a story like that, make sure to provide enough detail without being too wordy. We’re moving through our day very quickly. We shoot at 11 a.m. and have it on the air by 4 p.m. The pace of broadcast means we need your pitch to cut right to the heart, right away.