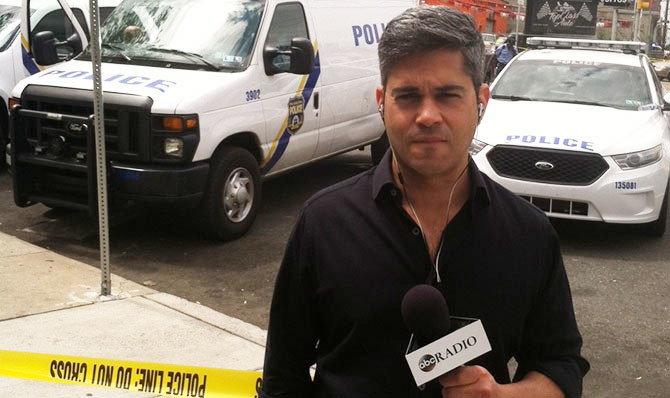 We recently had the chance to catch up with anchor Scott Goldberg of ABC News Radio to learn about what a typical day means (if there is anything typical about a 24-hour news cycle), how radio is resilient and how storytelling in this medium must be adaptable.

Goldberg joined the network in 2011, and he has covered a number of important stories, including Hurricanes Irene and Sandy, the 2012 presidential election, the manhunt for the Boston Marathon bombing suspects and the hated polar vortices of winter 2013. He has spent more than a decade covering business, political and breaking news for TV stations in the South and Midwest. He is the winner of five regional Emmys and two regional Edward R. Murrow awards and received the National Edward R. Murrow Award for Writing in 2015. He also has been a contributor to three national Murrow awards, including ABC News Radio’s 2014 awards for coverage of the Boston Marathon bombings and Overall Excellence.

Here are his thoughts on what a day in the life is like at ABC News Radio, why lunch and sleep are luxuries and what PR professionals can do to make sure they have the right approach when pitching this medium.

Q: Describe your day as a correspondent/anchor – while there isn’t a typical day in radio, on average,what does your day look like?

A: There absolutely is no such thing as a typical day! We’re a 24-hour news service and at the mercy of events as they develop. If it’s a big story, that means special reports, live anchored coverage … maybe spur-of-the-moment travel … you never know.

That said, a “typical” day as a correspondent (for morning drive radio) means waking up at 3:30 a.m., doing prep work on the way to the studio, starting to file pieces by 5 a.m., and beginning live two-ways (as a guest on shows around the country) starting at 6 a.m. It’s a mix of reporting, 2-ways and conducting some interviews for our digital channel until 10 a.m. After that, it slows down a little, and I can work on projects with longer time horizons. Unless, of course, something’s breaking. If all goes well, I can leave by 2 p.m.

Anchoring means writing and delivering every word of two newscasts every hour. Three-and-a-half minutes at the top, one minute at the bottom. Plus special reports as the news warrants. Our anchors have to preview, select and play every piece of sound (interviews, reporter pieces, etc.) they use in a newscasts. A typical anchor shift involves six cycles (two newscasts per cycle), with at least two hours of prep time before the first newscast. And then we typically stay after our last newscast to file a report other anchors can use – or work on longer-term projects. I always eat at my desk, unless I’m on the road and can’t eat.

Q: How has broadcast journalism evolved over the years?

A: Oh boy. I’m old enough to have seen the evolution from thick video tape to memory cards (in TV), the transition from linear to digital editing (TV and radio), the transition from managers hating the web (No! Don’t send viewers/listeners there!) to loving it (Can you write another version for the website?) … and, of course, social media. Everyone’s till trying to figure that out. And there are SO many sources of news now. So many competition for ears and eyes. And no such thing as appointment viewing and listening. People can get what they want, when they want it, often without paying for it. It’s tough. But somehow we keep making it work (and the death of radio, in particular, keeps getting greatly exaggerated).

Q: How have you needed to adapt your storytelling approaches to your audiences?

A: Good storytelling is the one thing that always stands out – no matter if it’s a newspaper article, a TV piece or a radio report. Said another way, it doesn’t matter how the news gets delivered –people respond well to stories that are smartly written and produced. In this business, you spend years developing your own voice. I see it as the ability to be authoritative yet conversational. One thing I’ve had to practice is being more casual in my writing and delivery because the world is getting so much less formal. I used to think a credible correspondent had to be the guy in the trench coat sounding like an English professor. But nobody wants to listen to that guy. Sometimes you have to say “dude!” and be OK with it. But get the facts right.

Q: Does radio have more staying power than TV-it has gone the way of video, so what about radio?

A: You know, it’s a great question. If you look at the stats, radio still reaches more people – even younger people. And it seems to keep re-inventing itself. I’m not sure that the challenges facing radio are so different than the challenges facing all media. We just need to be nimble and reach people in the places where they’re looking for information, and be there when they want to listen. Not just when we’d like them to listen.

Q: What types of stories do you look for in PR pitches?

A: In a word, relevance. And access! OK, two words. I want to know why anyone should care about what you’re pitching. And if it’s a good story, I want access to the compelling voice, the character, the person at the heart of the story – and not just a talking head. It should be relatable, with an easy tie to someone’s life or – at least – to a story/issue we’re hearing about in the news.

Q: What stories are the most ripe for radio? How is radio different from other types of media?

A: As I mentioned before, I think a good story for users of one medium can be a good story anywhere, as long as it’s told well. For radio, we need sound. That may seem obvious, but I want to HEAR whatever we’re talking about. Don’t just tell me about drones, let me hear that buzz. Apart from needing those sound effects (“elements” as we call them), we just need good, relatable topics. Think about the stories that catch your attention in the car, shower or wherever YOU listen to the radio. Why and how did the topic/issue/characters speak to you? We’re looking for stories that do the same thing.

Q: How have PR folks helped you, and what value have you gotten out of PR pitches?

A: I love it when someone says “You know that thing in the news? I’ve got a story with an angle you haven’t heard before.”

Or “You gotta hear what this person has to say.” Or when PR folks know we have franchises that go out regularly (Tech Trends, for example) and say “I’ve got a topic that would make a good one of those” – that’s really awesome. And when a pitch doesn’t pan out, keep trying! It’s never personal, and we’re always looking for ideas.