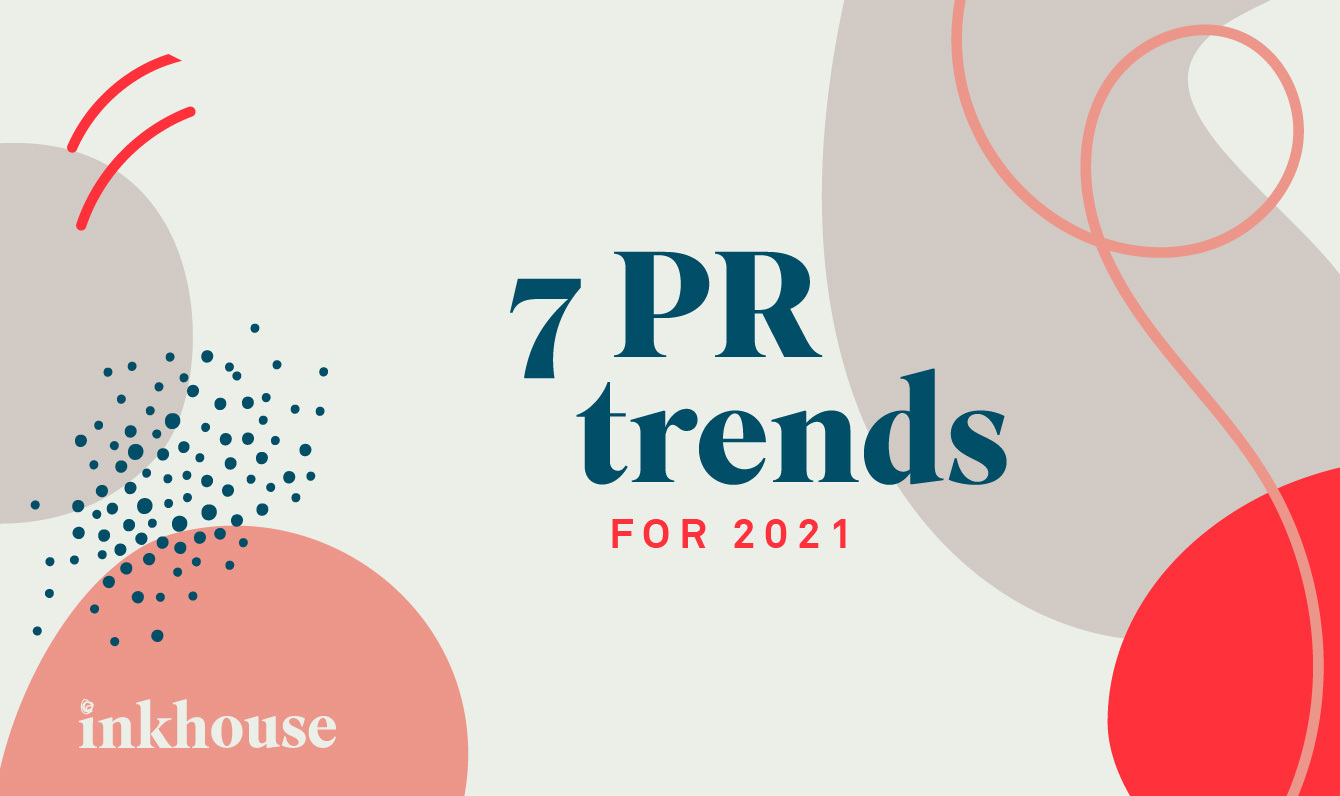 The problem with predictions is a year like 2020. Our theme was clarity when it should have been chaos. But somehow, we managed to get a few trends right in December 2019: all news is political news, trust is at stake, and local news matters.

As we arrive at the end of 2020, I wish our theme had been resilience. We learned how to push PR forward during a time when the only news was Covid-19, and developed a toolkit for communicators. We pivoted to virtual events and to a work-from-home model. And we did more than make it work. We learned how to make it good.

This year I’m not going to attempt predicting what might happen in 2021. Instead, here’s a look at the trends currently affecting public relations.

The press are holding organizations accountable for change, as they should. In our own industry, Hold the PRess called out the PR industry for our poor track record. At Inkhouse, we made our data public and are committed to doing the work. It’s happening in every industry. In a recent conversation between TechCrunch Senior Reporter Alex Wilhelm and Dan O’Mahony, who leads our San Francisco office, we learned that more and more, TechCrunch is asking companies they cover about the diversity of their teams. TechCrunch and many other media properties are also diversifying their event speakers and sources. Every spokesperson should be ready with their DE&I stats and action plan. And if you happen to be a white man, I’d recommend having a list of women and people of color to offer in your place.

Tesla has stopped outbound PR in favor of an exclusively owned content approach. Elon Musk can do whatever he wants because he and Tesla enjoy rockstar status. However, this approach is risky for most other organizations. Not only does it require widespread name recognition, but also a passionate community. We believe in the hybrid earned/owned PR approach, and often recommend company-run newsrooms, but it takes time, effort, and external credibility to build your audience.

Eschewing the media also has ramifications, even for rockstars. This choice means you have to behave perfectly because the press are going to be watching closely. Lack of access and transparency can turn your employees into sources. Just this week, Facebook employees were sending details from a company meeting to reporters. And there is the recent NYT story about the tokenization of Black employees at Coinbase. The decision to stop talking to the press has long-term and far-reaching consequences.

Gone, for now, are the days of tearful apologies on primetime television. The Trump effect has encouraged a slew of spokespeople to double down on bad behavior. Take the WSJ Op-Ed on whether Jill Biden should use the title “Dr.” The piece also referred to her as “kiddo.” Twitter erupted in outrage, ripping into James Taranto who’s in charge of the WSJ op-ed pages. Paul Gigot, the editorial page editor, doubled down on the decision to run the piece, calling it “cancel culture.” Any kind of response to controversy generates additional news cycles. What kind of reputation do you want to be part of your Google history?

#5. Inboxes are the new spam folders for pitches.

The year 2020 has seen a record number of layoffs in the media: nearly 30,000. And the ratio of PR people to reporters is getting ridiculous. This doesn’t mean there is a diminished demand for articles, but rather, that there are fewer journalists to write them. With less time on their hands reporters are going to the sources and PR people they know. Cold pitches are getting relegated to email while real leads are coming in through Twitter and secure messaging apps like Signal. Look for an agency with meaningful media relationships. And if you’re a spokesperson, be available, unique, and brief with your quotes.

Trust in the media has waned since Trump took office. This atmosphere has spawned a sometimes adversarial relationship between press and spokespeople amid the search for truth. I appreciate UC Berkeley School of Journalism Dean Geeta Anand’s point of view. She said, “Being unbiased doesn’t mean you don’t have an opinion. It means you approach your story looking for the truth. It means going to the other side, because you want to lift up every rock and look under it.” If you’re a spokesperson, be prepared to back up your truths. Don’t be surprised if a reporter talks to your critics. Consider it part of our collective responsibility to bring back facts.

We’re seeing more and more writers leave legacy publications to start their own newsletters, monetizing their personal brands, social media followers and expertise while celebrating the autonomy of an editor-less endeavor. Inkhouse Account Manager Ryan Ferguson adds, “The rapid rise of platforms like Substack has allowed more and more writers to deliver their unvarnished perspectives to readers inboxes, while also circumventing the algorithms of social platforms that have frustrated news organizations in their efforts to drive traffic to content.” While these platforms have smaller audiences than more traditional outlets, often, they can better target the right audience and give you more bang for your PR budget.